Written by Kristin
You are here: Home / Blog / Semester at Sea / Tailor Made in Saigon: A New Wardrobe from Vietnam
[shareaholic app=”share_buttons” id=”20872686″]

Some of the most fun SVV and I had during our Semester at Sea voyage was getting wardrobes custom-made in Saigon—though finding a quality tailor in Vietnam is not always the easiest pursuit.

That should come as no surprise, as I sort of love clothes, not to mention worked in retail in college and at a fashion magazine later in life, but up until two years ago, my husband—surfer dude from California—never even owned a suit. Now, he has three. But for both of us, total novices at having a wardrobe made, this was a rookie endeavor. What sort of fabric makes for a quality garment? How does the process even work? Well, here’s what we learned when it came to pinning down a tailor in Ho Chi Minh.

Tailors are a dime a dozen in Vietnam—how do you know who is legit? Well, you don’t. A whole lot of it is trial-and-error. And many of them don’t have websites so it’s hard to research in advance. Our first day in Saigon was spent trying to track down Cao Minh, a tailor who had come highly recommended to us by Josh, the dashing gentleman pictured above with SVV who had lived in the Vietnamese capital for five years. We never found Cao Minh, as locals kept pointing us the wrong direction. Eventually, we found ourselves instead on Pasteur Street, a row absolutely bustling with tailor shops, just on the opposite side of the famed Hotel Rex. SVV and our friend Brian went with the first men’s tailor we found after perusing the products in his storefront. I was a little pickier and went with word of mouth based on our friends Andrew and Jane’s recommendation. I was happy with all my results. Exhibit A: Trina found a tailor who she decided to take a gamble on, and I watched the process before doing it myself. The woman barely spoke English, and despite a lot of hand gestures and drawings, we weren’t completely sure if she “got” Trina’s vision. In the end, Trina wound up getting one dress back that she loved and one that she was a bit iffy about. I decided to keep looking before making any final decisions. Bring Your Own Fabric and Designs

My friends Trina and Paula were wise: They’d done this before, and they picked up fabric in Ghana with the intention of getting it made into something pretty in Vietnam. That worked out swimmingly for the two of them. Here is one of Paula’s Ghana-bought, Vietnamese-made products: (No, not the washboard abs, the pretty dress, you dirty minds, you.)

While the majority of tailors had their own fabrics for suits and men’s shirts, most of them did not carry women’s fabric—you had to find this elsewhere. Trina, SVV and I spent a morning perusing the various fabric shops along Ly Tu Trong for me, and while those are easy to come by, too, most only carried silk, and well, I’m not so much a silk girl. I finally found a couple cotton swatches at one of the hole-in-the-wall stores that I liked, and then later picked up the bulk of my fabrics at Chi Chi (and even brought some back to the States to design my own dresses at a later date).

Chi Chi—the fabric store on the back alley behind the storefront of the same name—had some of the prettiest fabrics I’ve ever seen, much of it very Anthropologie-looking, which is what appealed to me about this print. I promptly bought it and paid the store $48 to turn it into a maxi dress for me. I had five dresses made in total; for two of them, I took in dresses I really liked (no surprise, from Anthropologie) and had them copy the design. For the other three, I flipped through a book of patterns one of the tailors had on hand for inspiration then dictated to her what I liked to her, as she drew out exactly what I envisioned. Exhibit B (don’t mind the wrinkles): It’s a good idea to think of what you want well in advance and bring your own printouts, just in case the tailor doesn’t have any pre-made design ideas that you actually like. Oh, and of course, you can have things highly customizable made, as Josh and Trina did with their denim onesies (which cost them about $20 each and which they’ve both, surprisingly, already gotten about that much wear out of). I fully intended to do this with a Halloween costume, as well; maybe next time. Good thing we went and found our tailors on day one and two of our time in Vietnam, as it often takes a full week to hand-craft a tailor-made suit from scratch. Plus, you have to come back for a first and, often times, second fitting. Even giving the tailors five days was pushing it, and while I pulled the trigger on all my dresses on the second morning we were there, I didn’t actually go in for my first fitting until 10am on our last day in town; it wasn’t until 7pm—exactly an hour before I had to be back on the ship—that I went for my final fitting and picked up the merchandise. And the one “formal dress” I had made, which actually was silk, had only been a scrap of fabric the first time I tried it on. Good thing it fit like a glove! While we were in Pham Minh getting four dresses crafted up for me, SVV was just lounging, waiting (rather impatiently) as I sketched out my visions with the designer. By the time I was done, he had ordered another suit. I can’t blame him: The lady running the shop was darling—we like to say she “glamored” him into buying, as she did our friend Andrew. Then again, he had already paid $250 across the street, so he was only getting a second if she made it worth his while. After some intense bargaining—the Vietnamese are not easy when it comes to this—he got her to come down on the price, as well as throw in two shirts and a tie in the deal. Moral of this point: Don’t take the first price offered. There are so many tailors in Vietnam, that they will bargain with you for your business. You’re going to have to work for it, though. Plus, the tailors keep your measurements on hand for years to come and offer to ship internationally, so we fully intend to drop her an email one day soon and get her to make us some more pretty things. Here are the tailors we used. Print them out, plot them on a map and take them with you when you go to Saigon—or risk losing a whole day as we did wandering around like little lost lambs, as the majority of local tailors don’t have websites.

Expect to Pay: My dresses ran about $20 each (a little more for the long, silk one above), though they tacked on $5 if your item required a lining, which two of mine did. This doesn’t include the fabric. SVV paid $285 for a suit, two shirts and a tie—all made to his specs and including the fabric. We loved Nu (pictured above) and would go back here in a heartbeat. They don’t have women’s fabric, however, so ladies, it’s imperative that you bring your own; on the flip side, they do stock a good range of fabric for men’s wear.

Expect to Pay: $200 and upward for a suit, fabric included. Obviously, the better the quality of fabric, the higher the price. SVV and our pal Brian each had really nice suits made here, but they were pricey—for Vietnam. Still, you couldn’t get this kind of deal anywhere in the United States, so we’re not complaining.

Expect to Pay: More than you would elsewhere. This was one of the most expensive places we checked out in terms of tailor fees. I got the maxi dress a few photos above made there for $48 (not including fabric), but that was it. However, the majority of fabric for my other dresses was purchased at Chi Chi for about $11 a meter, simply because they had the best selection in my eyes. (FYI: You need between a meter and a meter-and-a-half for a dress, depending on the length.) I’d recommend stocking up on fabric at Chi Chi and having your goods whipped up for you elsewhere.

If you have your own recommendations for tailors in Ho Chi Minh, Hanoi or Hoi An, feel free to leave them below for the good of your fellow travelers!

TwitterFacebookWhatsAppGoogle+BufferLinkedInPin It
24 Hours in Kyoto, Japan’s Quaintest City Packing for Semester at Sea: Four Months On the Ocean
SHARE
[shareaholic app=”share_buttons” id=”20872682″]
JUMP TO COMMENTS
YOU MIGHT ALSO ENJOY Lessons Learned on Semester at Sea: What Study Abroad Taught Me 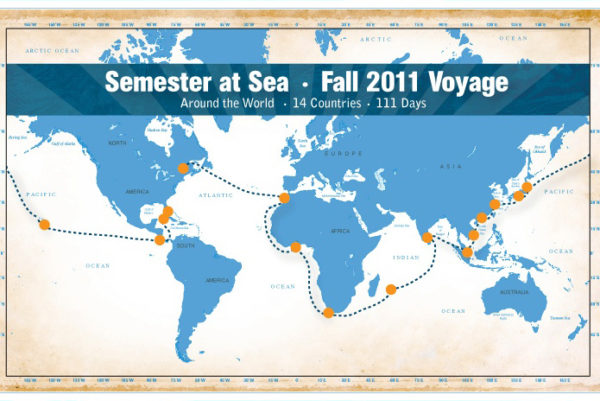 How to Prepare for Traveling Around the World