I’m Kristin Luna, journalist by profession, Southerner by birth, woman behind the blog. Pull up a chair, have a cup of coffee (or, uh, bourbon) and stay for a while, won’t you? I’m a Nashville-based writer specializing in all forms of journalism: travel, food, home renovation, entertainment, entrepreneurship, lifestyles. But I do a whole lot more than produce magazine and online content. I’m also a photographer, a videographer and a public speaker, as well as occasionally on-air talent.

My husband Scott van Velsor (aka SVV) works for Odinn Media, a company we founded a decade ago that focuses on media production, education and licensing visual imagery. Together, we run DMA-events, a 501(c)(3) nonprofit devoted to creative placemaking through community events and the installation of murals. We also have a real estate group with my family, through which we buy and rehab investment properties.

I have held court at this corner of the Internet since 2007, which I’m pretty sure makes me a senior citizen in blogging years. In case you’re brand new to these parts, let me give you the briefest of rundowns on the past decade from Camels & Chocolate’s conception to the present.

After graduating from the University of Tennessee in Knoxville with a bachelor of science in journalism and electronic media, I moved to New York to work in magazines: holding a string of in-house reporter and researcher jobs at magazines like Newsweek, Us Weekly, Entertainment Weekly and Lucky (RIP). I spent my days in a magazine office; my nights out on the red carpet covering movie premieres, film festivals and other star-studded events; and all the other waking hours writing freelance travel pieces for outlets like the Travel Channel. Before I closed that chapter, I last was a Conde Nast employee, a researcher working in the managing editor’s office and overseeing travel content. It was an exciting, if not exhausting, time in my life.

But I was dating my now-husband Scott, a fellow journalist I had met living in Holland who lived 3,000 miles away in California, so eventually I gave my notice and moved to San Francisco to join him—just months before the 2008 recession. Freelancing for the first time proved to be both easier and harder than I expected: easier because I had connections from my New York years and harder because, well, what wasn’t made more difficult by the financial crisis of 2008? Still, I survived by regular contributor gigs to top consumer publications and writing the annual editions of the Frommer’s California, San Francisco and Los Angeles guides, which also enabled me to get to know a good portion of the vast state that would be my home for four years.

Our journey to Tennessee

In 2010, we had a small wedding in Muir Beach, and then soon after decided it was time for a change of scenery. Where better to do that than 2,000 miles away in my homeland of Tennessee? We made the decision to leave in the fall when our lease was up but spend a good part of the year exploring the domain of the country we’re about to abandon: first, by skiing all winter at Tahoe; then, by going on a lengthy trip to Hawaii; finally, by traipsing around the national parks of the West by campground and trailer.

But fate had other plans. During our journeys, I get a call offering me a job for Semester at Sea, a study abroad program I first learned about when my sister did it. So we moved our pup Ella and our belongings to my parents’ home and—literally—sail around the world for four months. It was the best farewell to the Pacific Coast we ever could have imagined. In 2012 when we finally arrived in Tennessee, we bought our first house, a stately old Victorian off the square in Manchester. We spent eight years fixing up this 1899 beauty and restoring her to her former glory. We still own her, and she now functions as the office for a healthcare company. I also went back on Semester at Sea for three subsequent voyages as the communications director, and together, SVV and I went through a state accelerator program where we started our own business, offering copywriting, photography, media education and more. Somewhere, along the way, SVV and I got into murals. Like really into murals. We love what a fresh coat of paint does to a dilapidated building and have seen tourism in so many small towns far from any interstate corridor thrive thanks to visionaries and robust public art scenes. So, in early 2018, we started our own mural program. 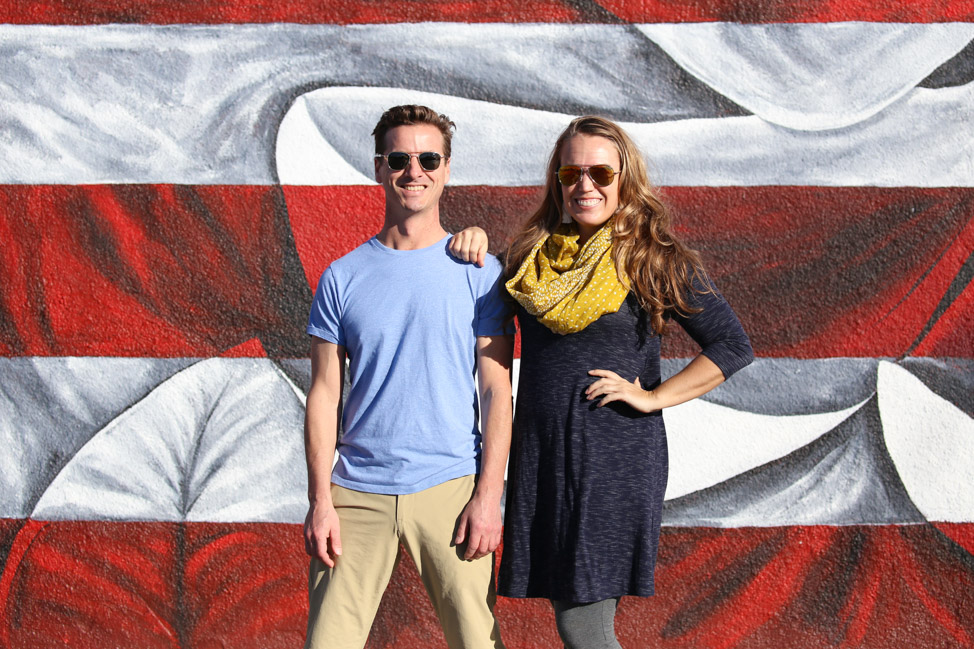 Four years into DMA-events’ conception, we’ve installed 40+ murals in small towns across Tennessee. If you want to know a few of our favorite public art cities that have inspired our own program, look no further than Oklahoma City, Cincinnati, Memphis, Lexington and, of course, Nashville.

The year we started DMA was also the year the second love of my life, my niece Charlotte Rose, was born, with her brother Mac following two years later. In 2019, we got tired of living in the Victorian and bought a gorgeous midcentury-modern house made out of cedar instead. This shook up our lives in the best of ways, and we moved cities and got the Vic ready for her next life as a commercial space. Other things to know about me

I’m an unabashed Taylor Swift fan, and my wildest dreams came true when I got to interview her for a cover story announcing the debut of her 1989 album. I’ve interviewed, literally, hundreds and hundreds of celebrities, but she ranks up there as my favorite. Some others I loved who immediately come to mind? Tom Hanks, Bill Nighy, Steven Tyler, Ben Affleck, Russell Brand. Least favorite? Richard Gere—just retire already.

Before graduating from UT, I completed the first half of my college years at Sewanee: The University of the South, studied abroad at the University of Edinburgh, and also completed a year post-grad program in international journalism at universities in Holland and Denmark. If you think going to journalism school at a public institution won’t afford you the possibility of a career in magazines, I challenge you to reconsider. My two years at UT were exactly what I needed to kickstart my career, and I am grateful for all my talented professors who sculpted and honed my writing skills.

I’ve written a lot about the journey to becoming a successful writer and how you, too, can pursue a career in journalism. For more information on this click here.

I’m a fitness buff: A college tennis player, I was a marathoner during my California years, and now get by doing everything from personal training to AcroYoga to Zumba to standup paddleboarding (we live near several lakes and each own a board). SVV and I are active travelers; we love diving above all else, but you’ll also find us skiing, hiking, running (…to the nearest bar) and engaging in a number of other active pursuits when we’re on the road.

What am I not? I’m not a backpacker. I’m not a nomad. I’m not someone who up and quit her job, abandoning her old lifestyle to travel the world without pause. I’m just a girl who has managed to balance a career with family life, home ownership and jetsetting—and I want to show you that you can do the same.

So…won’t you come along for the ride?