Chugging Along on the St. Kitts Scenic Railway

Written by Kristin
You are here: Home / Blog / St. Kitts and Nevis / Chugging Along on the St. Kitts Scenic Railway
[shareaholic app=”share_buttons” id=”20872686″]

If I could choose one mode of transportation to take always, it would be the train, no questions asked. I’ve traveled to many a European country by rail and even among some U.S. states, too. So I was thrilled—and a bit surprised, too—to arrive in St. Kitts and find it boasts a passenger train all its own.

Billed as the “last railway in the West Indies,” the St. Kitts Scenic Railway was started in 1912, completed in 1926 and served as a vital part of the island’s sugar cane trade, transporting goods around the island from field to mill during the harvest season. St. Kitts’ sugar industry outlasted the rest of the Caribbean, but eventually ceased operations in 2005 after 350 years of being one of the big players. However, two years prior, the St. Kitts Scenic Railway was opened for tourist business and continues to operate excursions daily. There are six train tours a day—three round trips, though most people just opt for one way and take a transfer back—for $89 per adult. Since Basseterre is such a big cruise port, trains fill up with ship passengers so it’s wise to make a reservation in advance. The top level of the double-decker train is open air, meaning you get to enjoy the breeze and catch some rays as you cover the 18-mile route over the course of two hours. Those who need to get back to their departure point can opt for the train-bus option, which completes a 30-mile loop, and there are other combo tours like the sail-rail package and a Brimstone Hill Fortress add-on. Train attendants (who also double as A capella singers) serve complimentary beverages—both alcoholic and virgin—throughout the trip, though our party was still paying the price from a late night the previous evening, so we all opted for water. 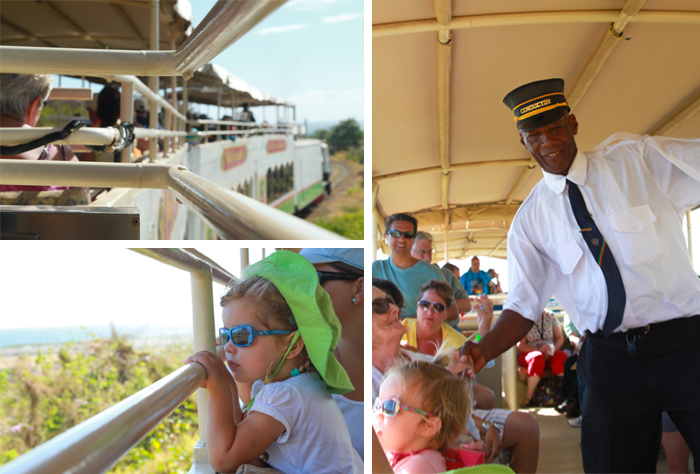 The best part about the train trip is that it allows travelers to St. Kitts the chance to see parts of the island that aren’t accessible by car, from private beaches to dense rainforest to mountainside collectives. The tracks also run smack through the center of villages, and it never failed that a gaggle of adorable preschool children would run out and chase after the train, waving. (The train attendant told me this happens every single time the train choo-choos by.) The scenic railway was one of my absolute favorite parts of my trip to St. Kitts. I can’t say I ever in a million years would have guessed I could explore a Caribbean isle by locomotive. I’m curious, have you ever been on such an open-top passenger railway before? Honeymoon in St. Kitts: What to Do, See and Eat 19 Reasons to Go to St. Kitts in the West Indies