From coastal Sicily, we didn’t really have an agenda. We would drive until we didn’t want to drive any longer, check into a bed and breakfast when we decided where we wanted to go next. It was the perfect formula for a relaxed vacation really. “Next” wound up being the famed Mount Etna, which was not much more than an hour up a steep, windy pass from Riposto, where we’d stayed the night before. For three years, SVV lived with this as his view. So many of his Navy memories include seeing “the melting red syrup sundae of a mountain dripping,” in his words, after driving home from the base following a night shift. He lived in Sicily during a particularly active time in the volcano’s history and it erupted often, though there have been even bigger episodes in more recent years. In fact, in 2002–2003, “a much larger eruption threw up a huge column of ash that could easily be seen from space and fell as far away as Libya, 370 miles  south across the Mediterranean Sea,” according to Wikipedia. “One time Etna burped two smoke rings,” he recalls. “One absolutely huge white one that hovered for about an hour above before yet another smoke ring, this time black, burped up through the center of the first. Then the whole thing just blew up and blasted tons of ash into the sky. It closed down the airports if I remember right and rained sand onto my pool, at which I was lifeguarding/tanning at the time.” The drive up was a gorgeous one; the terrain changed from lush and colorful to stark and rocky. The volcano is nearly 11,000 feet high, though we only drove up to the visitor’s center, which is about 6,300 feet up. From there, you have to off-road it—take the cable car or a guided hike excursion or go on a 4×4 tour. 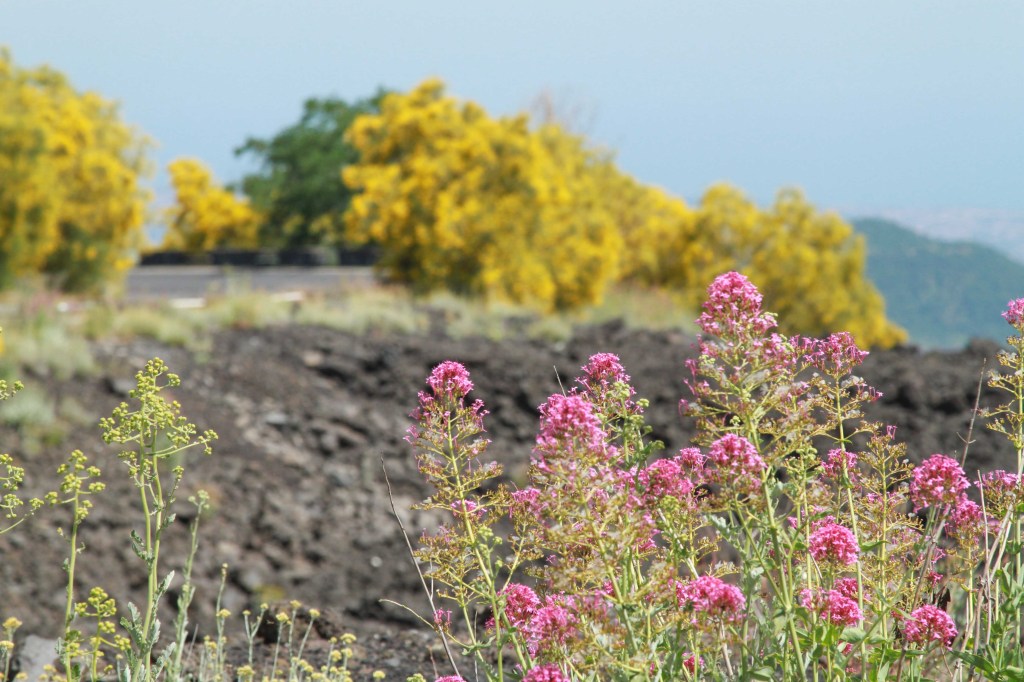 Naturally, when we reached the end of the line (for us), I took the opportunity for a little yoga break. Fitness while traveling—it’s all about balance, right? In my case, literally. Because doing crow pose atop a jagged volcanic rock only seems logical. As does a headstand (and yes, my forearms were shredded after my ill-advised active pursuits). After a brief stop at the visitor’s center, where there’s a restaurant, bar and shop, we headed back down the mountain; it was a solid hour to the autostrade and another two hours to Enna from there. Why Enna? We knew nothing about it before arriving on the island, but an American friend whose trip to Sicily happened to overlap with mine saw that we were there and highly recommended we look into Villa Isabella. I’m all about word-of-mouth recommendations, particularly when it comes to travel, and that’s how we found ourselves in Pergusa, just outside of Enna, smack in the middle of the island. A native Sicilian, Gino grew up in the area, though he’d been in the United States for decades, a well-known restaurateur on the West Coast. He and his wife Connie, a Scottish lass with a heavy brogue, decided to inch toward retirement and bought this gorgeous villa a couple years back that they’re slowly turning into a bed and breakfast. Villa Isabella—named for the couple’s daughter, a high school student in Santa Barbara—has four rooms available for rent, starting as low as 55 euro. The downstairs is available for guest use, from the living room to the kitchen. And of course the swimming pool is always open (daytime or night) for anyone wanting to take a dip. We opted not to cook—we were on vacation, after all—and enjoy Connie’s cooking instead. For an extra 25 euro per couple per day, she’ll whip up a gourmet meal. You can also tack on lunch. Breakfast is included in the nightly rate. I adored Isabelle for more than the obvious reasons (great hosts, reasonable prices, gorgeous setting, delicious fare). They also had plenty of fur babies, who just happened to be as welcoming as their parents. After two weeks away from Ella, some slobbery smooches from Winston were just what I needed. This mischievous guy actually went missing while we were there and showed up the next day after more than 12 hours gone. This wasn’t his first time to roam either; the previous year, Winston had run away from home for more than six months, only to show up one day and startle Connie by licking her while she was sunbathing by the pool! Needless to say, we all had quite the scare. As avid rescuers with hearts of gold, Connie and Gino also lay claim to a posse of cats, one of whom had recently birthed a litter of kittens. The kittens weren’t nearly as interested as cuddling as Winston was, though the patriarch Rocky didn’t want to leave SVV or me alone. But Connie and Gino’s hospitality extended beyond their own home. One night, they even took us into nearby Enna for a night on the town. We had some pizza and beer on the square and they drove us around to see the fortress town all lit up at night. Most of our two days in Pergusa was spent by Connie and Gino’s gorgeous pool. I mean, who wouldn’t want to sweat off the 90-degree summer heat in the heart of the Sicilian countryside? I was admittedly quite sad when we left Isabella. This is the vacation we sought: no being on a schedule, careless days spent by the pool tearing through our Kindle queues, no plans for our evenings other than to eat whatever Connie whipped up. It was glorious after so many weeks on the go, exploring a different European city each day. I’m definitely glad that we took a two-day vacation from our vacation, and I’d confidently steer anyone in the direction of Isabella who is hoping to do the very same thing.