Last month, I headed out to Utah for a fun-filled photography adventure weekend with Visit St. George and iExplore. It was an epic Instameet, open to the public, free for any to attend, and more than 30 of us photography lovers gathered to go on hikes and capture this gorgeous slice of the Southwest. We also put our photog skills to good use. I’ve been shooting exclusively in manual mode on my Canon DSLR for a handful of years now and thought I’d share a few tips to photography Utah’s red rock landscape—and any national park in general—for the next time you’re feeling the hankering for a photo walk. 1. Avoid harsh light. In general, I’ll shoot in the morning and the very late afternoon, but it’s rare that I take my camera out in the middle of the day when the sun’s directly overhead. It washes out the color and casts shadows on the subject that aren’t generally too flattering. Later in the afternoon can be better, color-wise, but tricky, too, with variable lighting creating shadows in the background with a blown-out foreground (or vice verse), similar to here. A basic rule of thumb: The hours directly following sunrise and right before sunset are generally the best time to get great natural light and a deeper color palette. 2. Utilize the rule of thirds. Sure, sometimes it’s nice to have a subject centered (see: the above photo), but for the most part, a more interesting shot is one in which the subject is in the top, bottom, left or right third or the frame. 3. If shooting at twilight, use a tripod. Camera shake is a legit concern when it starts to get dark outside and your shutter speed slows to let in more light. In past photography courses I’ve taken, I’ve heard you should always use a tripod for anything less than a 1/50 shutter speed (depending on the focal length). I have a pretty steady hand and can hold the camera still at 1/30—anchoring my elbows taut against my stomach—but you should learn what works for you and at what shutter speed you start to get blur. Even though I don’t always pack my trusty tripod (since I’m usually traveling with just a carry-on when flying), I can always find something to set my camera on top of to use as a tripod, whether a ledge, a bag of rice, the ground; get your settings right and turn it on two-second timer to avoid any shake whatsoever. 3. Find the path less traveled. While, sure, we went into Zion for a day—you can hardly go to St. George and not visit one of the country’s best national parks—such popular attractions often come with a downside: crowds. Think outside the box. It’s not like Zion is the only park in St. George; rather, the county boasts four state parks and I’d venture to say my photos from them were even better than Zion because I had space to play and wasn’t constantly dodging people. Do your research and find the less-Instagrammed attractions that are often every bit as breathtaking. 4. Play with both foreground and background focal points. When shooting landscapes, I like to have something in the foreground for perspective. But that doesn’t necessarily produce the best image every single time. Instead, I’ll often take the same frame with multiple focal points, then decide later after I’ve downloaded all my images to my computer which I like better. The great thing about digital after all is that your space is more or less unlimited (depending on the size of your memory card, I suppose!). 5. Mix up your shots. Love macro photography? Step outside of your comfort zone and try a sweeping landscape shot. Have a tendency to only zoom out and shoot a? Try focusing on a single subject and playing with your depth of field. 6. Sometimes with a big sky landscape, you need a subject. A dash of depth of field often adds a more interesting perspective than just a straight-up landscape capture without anything in the foreground. 7. Have fun with it. The great thing about Instagram becoming such a powerful visual tool is that it’s forced all of its users to get creative in order to stand out. I have no qualms staging a shot and asking a friend to be in it, just like I’m not embarrassed to rope in others to be in my picture even if I hardly know them. What’s your best tip for photographing a national park? This post was in partnership with Visit St. George and iExplore. 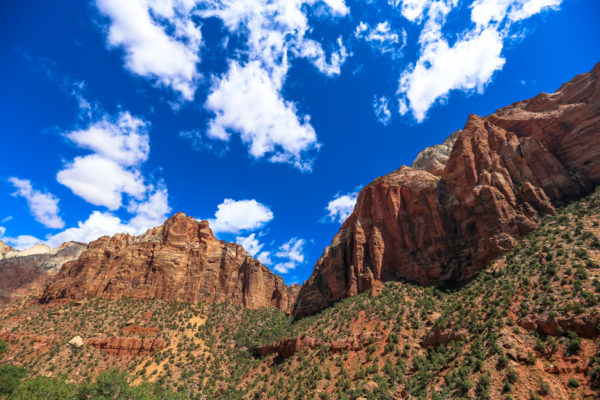 Everything You Need to Visit Zion National Park Canyon Overlook: An Easy Way to Find a View in Zion