Books a Million: Easy Fiction for the Holidays

Written by Kristin
You are here: Home / Blog / Books / Books a Million: Easy Fiction for the Holidays
[shareaholic app=”share_buttons” id=”20872686″]

I’ve been on a reading tear lately, having devoured six books in the past six days, and after a bit of a drought this fall, it feels good to be back in a cycle. What it took? Finding the right easy fiction to get me back into the daily habit of reading.

More of an audiobook fan than actually reading? I’ve been a subscriber to LibroFM for the past couple years and am currently listening to both Radium Girls and Our Missing Hearts. I prefer LibroFM to Audible because it supports independent booksellers and I can choose which bookstore gets my purchases—in my case, Parnassus—and snag deals on books for $5 or less. You can try out a subscription here and cancel at anytime. It’s also a great holiday gift idea for the book worm in your life!

With that said, here’s a roundup of the easy fiction I’ve read in the past few months. And if you exhaust these, I have more than a decade worth of book recommendations here.

Every Summer After by Carley Fortune

Persephone Fraser returns to the lakeside town she spent summers in growing up for a funeral and is forced to face Sam Florek, the man she left behind when she traded a simple life for one in the city. I loved the storytelling of this book and how it flitted back and forth between the six years Percy and Sam knew (and loved) each other as teens and the present (age 30)—it made me want to go back in time to my teenage years, something I can say I’ve never actually wanted before (ha). Birds of California by Katie Cotugnu

If you’re looking for a one-sitting read, Birds of California is it. A pair of former teen actors—both grappling with life after stardom—who starred on a fictional show the book is named for find themselves thrown into each other’s lives once more in their late-20s when the idea for a show revival comes about. I’ve never been wild about Emily Henry’s writing, so bear that in mind when I say Book Lovers s my favorite piece of fiction she’s written to date. A literary agent and her editor nemesis both find themselves in a North Carolina town, the cheerfully named Sunshine Falls, for the summer, each there for a different reason: one to support her sister and the other to help his parents revive a dying family business. This is the type of fun easy fiction that will have you wanting to pack your bags and indulge in that dream of leaving everything behind for a picture-perfect town you would only find in a novel. The Hotel Nantucket by Elin Hilderbrand

While the premise sounds weird—a ghost is living in the attic of an old hotel, trying to avenge her death by getting some guest, any guest, to notice her and also serves as one of the book’s many narrators?—the execution is flawless and exactly why I love Hilderbrand’s novels so much. They’re easy reading at their finest, and this multi-narrator tale of a hospitality team trying to breathe life back into a historic Nantucket property was one of my favorites of the year. The Lost Apothecary by Sarah Penner

I listened to this one on long drives, and even as an audiobook, The Lost Apothecary fell completely flat. A historian and scholar flees to London after finding her husband has cheated on her and finds herself digging into a lost artifact that belonged to an apothecary centuries prior as she unravels the tale of what happened to the woman. The premise was a fun one, but the writing (and especially the voice narration) just didn’t to it for me. Do yourself a favor and strike this one off your reading list. I was not expecting to like this book as much as I did but it turns out Jane Green rarely fails me. In this captivating tale that will undoubtedly evoke 60’s nostalgia for those who lived through the mayhem of a decade full of wit and whimsy (and a whole lot of drugs), an artist packs up her home after her husband’s death and unearths a mountain of memories in the form of her previous life as a band groupie in Morocco. I loved the setting, the premise and the fact that many real-life celebrities, Talitha Getty and company, were woven into the narrative. This is yet another instance where the book does not depict the cover, as the cover looks like Followers might be a Mean Girls-esque tale of high school drama, when in reality the internet crashed (an incident dubbed “the Spill”) and we’re in the future when all tech has been overtaken by the government and nothing is private anymore (so, uh, not that dystopian it turns out…). This book was gripping and terrifying and dark as a couple main characters vie for celebrity status in a government-appointed world of celebrity while another desperately tries to escape the reality of growing up under Big Brother’s watchful eye. Preschool teacher Callie Dressler’s life is thrown into a tailspin when she finds out her college boyfriend, who she dumped a decade prior without cause, has written a movie assumedly about their relationship. This coming-of-age novel, while slow in parts but heavy on character development, touches upon what happens when you stop following the script and start taking chances. Nothing to See Here by Kevin Wilson

A 28 year old with no career path or discernible life direction is recruited by a long-lost high school friend to be the nanny for her Senator husband’s 10-year-old twins who spontaneously combust (yes, I said spontaneously combust). Even better? The author is a professor at Sewanee, so the book is set up on the mountain and in Franklin, Tenn. I listened to this one by audiobook, and the narration by Marin Ireland was absolutely delightful. 10/10 would recommend. What to say about this book that hasn’t already been said by hundreds of book reviewers? If you only read one novel this year, make it Tomorrow, and Tomorrow, and Tomorrow. It’s a breathtaking tale about friendship that starts in a hospital ward and ends with Sam Masur and Sadie Green founding one of the most successful video game companies of their generation. In between, though, things are messy: for them, between them, and with their relationships with others. This novel explores friendship and at what cost you sacrifice creativity and originality on the road to fame and wealth. I loved every page of this beautiful journey and undoubtedly will read it again in the not-so-distant future. Lessons in Chemistry by Bonnie Garmus

There aren’t words to describe how much I absolutely adored this five-star read about forging your own path and staying true to who you are. Elizabeth Zott is more than just the household name cooking show host a TV production company has turned her into; she’s a brilliant chemist and on the verge of breaking ground in the field of abiogenesis. The problem? It’s the early 1960s, and sexism is very much alive, especially in STEM. Without giving anything away, Elizabeth goes on to defy the odds, in love and in her career, as she shatters the glass ceiling and teaches women across the country they can be so much more than a housewife if they choose. In Five Years by Rebecca Serle

The world of a 20-something corporate attorney who adheres strictly to her five-year plan is rocked when she has a premonition—or did it really happen? we don’t know—about an entirely different life that does not involve her current fiance. The book leads up to that day in the future when her life might take a turn she never factored into her plan. I like that Serle’s books all have a tad bit of the supernatural in them without being fantasy novels. One Italian Summer by Rebecca Serle

After In Five Years, I had high hopes for this romcom about a 30-year-old writer who travels to Italy following her mom’s death only to find herself transported back in time—and her mom there, too. This novel seriously lacked character development, and I found myself not really caring about anything other than the setting (I mean, you can’t beat Positano, right?). It Ends With Us by Colleen Hoover

This is the part where I admit I have never before read a Colleen Hoover book. To be perfectly candid, the covers are terrible and don’t at all describe what the book is about (case in point: I thought she wrote horror!). But when a friend gave me the paperback of this book—about 20-something Lily Bloom who leaves her vague corporate marketing job to fulfill a dream of opening a flower store—I read it in one morning on vacation. The book took a sharp turn when she introduced domestic violence (trigger warning), but I still ultimately enjoyed the writing and storyline. (In fact, think I might be a converted Hoover fan, although I wish she’d invest in a better graphic designer.) Carrie Soto Is Back by Taylor Jenkins Reid

I’m a TJR fangirl, and Carrie Soto lived up to its hype and my love for the author. I also love that Jenkins Reid spun an entire narrative out of a minor character in a previous novel (Malibu Rising). In Carrie Soto Is Back, the titular character returns from retirement to defend her record as holding the most Grand Slam titles of all time. As a former tennis player, I loved the WTA tour aspect of this book, though you don’t have to be a sports fan to enjoy it, as ultimately it’s a tale of devotion, loyalty and feminism. Outdoor writer Laurie Sassalyn returns to her hometown in coastal Maine to clean out the belongings of her late aunt—and uncovers an entirely different life her beloved Dot led from the one she knew. Along the way, she reconnects with her high school love, and while the books is fairly predictable at times, it was also cute and charming while perhaps being nothing revolutionary at the same time. What easy fiction have you read lately that I should add to my list? 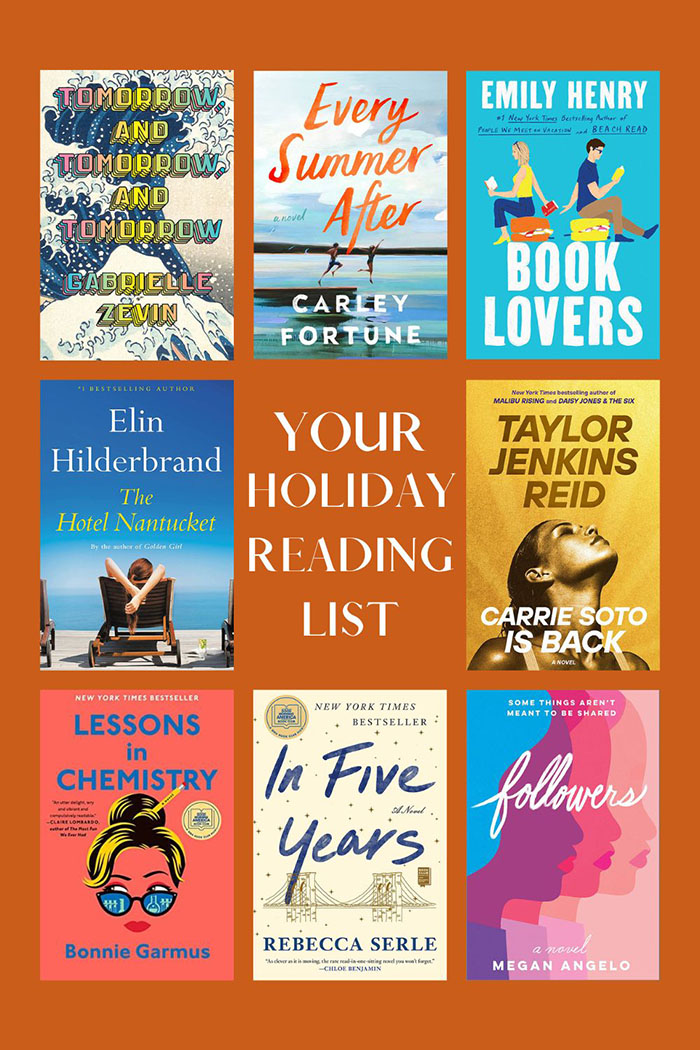 TwitterFacebookWhatsAppGoogle+BufferLinkedInPin It
October 2022 Highlights: The Highs + Lows How to Plan an Epic Trip to Bowling Green: A Weekend Itinerary
SHARE
[shareaholic app=”share_buttons” id=”20872682″]
JUMP TO COMMENTS
YOU MIGHT ALSO ENJOY Books a Million: A Deranged Bookseller, a Racing Dog and an Actress in Greece