How ‘Bout Them Apples? Ben Affleck Bares All

Written by Kristin
You are here: Home / Blog / Entertainment / How ‘Bout Them Apples? Ben Affleck Bares All
[shareaholic app=”share_buttons” id=”20872686″]

In going back through my archives for my People editor today, I found this conversation from cocktails with Ben Affleck while promoting Hollywoodland in December 2006. I’d never really had an opinion about Ben one way or another, but after spending a short evening with him, I think we could definitely be friends. Wouldn’t you agree? Plus, he’s besties with Matt Damon, and how can you fault him for that?

The best part was how my mom sent out an e-mail with the above picture attached, boasting to all of her friends, “This is Kristin’s new boyfriend. She’ll be bringing him home for Christmas.” The savvy half retorted, “Oh, is he bringing his wife and child, too?” while others like her pal Nancy were perplexed when they met Scott, thinking he’d undergone a major makeover since this photo was taken (and perhaps shrunk half a foot).

Me: I overheard you talking about sex and gossip. Sounds scandalous — what exactly was the gist of the conversation?

Ben: Sex and gossip, yes. It’s something I try to stay away from. I was just saying that I think there’s more of a proliferation of the gossip stuff in magazines that bleeds over into movies now. So there’s less of a dividing line between them. You have more of a continuous flow from the pages of your favorite entertainment magazine that is kind of really interested in the sex lives of celebrities and the sort of high school gossip aspect of that into the movies.

This other gentleman I was just speaking with was saying that he felt there are younger writers now at magazines and stuff – even critics – for whom (Ed. Note: He uses proper grammar, bonus points for Ben! One of my biggest editor’s pet peeve is not being able to distinguish the difference between “who” and “whom.” Dork, party of one, I know.) the news of the relationships between real people, like between actors and their sex lives or whatever gossip, is a bigger story, is more important than the movies or the music they’re doing. He was saying he thought there had been this paradigm (Ed. Note 2: His vocabulary incorporates words with more than two syllables.) shift where it used to be someone recorded an album and that was what was really interesting and, by the way, they married so-and-so or they threw a fit. Whereas now it’s kind of the other way around, you know the flashier, showier stuff that isn’t about art or music or anything at all gets the attention, and it’s just sort of a reverse-engineered thing. Not reading as much entertainment magazines, I can’t speak about that as well. But I do think there is certainly more of a connectivity now, there’s less of a dividing line between personal lives and movies and the magazine than there was 10 years ago.

The Internet’s a big thing, too — it’s instantaneous. While you’re instant-messaging your friends, you can find out that a whole marriage has been made and destroyed. I think the Internet has a lot to do with it. And I don’t say any of this in an I’m-better-then-everyone else way. I actually don’t read any of those magazines, but I mostly don’t read them because it’s too horrible to read stuff about myself. I just find it too distressing to read about myself so I stay away from it entirely. They’re certainly very popular, and people like to gossip, whether they do it in the workplace or at school and it’s sort of bled over: the American celebrities have become the national high school – like the popular girls and the mean girls and the tough guys. Everybody’s attached to their class – people you hate, people you like, people who are goody-two-shoes, people who are the bad kids.

Talk about politics, how he supports Obama, blah blah blah…

Me: Let’s talk about Hollywoodland (sadly, not my favorite of his films), which you’re currently promoting and for which you were just nominated for a Golden Globe. Do you have that one scene from the movie that stands out in your mind?

Ben: The thing that probably stood out the most for me was the scene with Diane and I have this big fight. Diane’s character and I have this fight, and I thought it was interesting. It was kind of about your relationship with somebody where you build resentment and build resentment and never say the things that you feel when you’re made angry. And you hold them in, you hold them in, until finally you break up, and both of them are kind of letting out the meanest stuff they can think of to say about the other person, stuff that they’ve held onto for so long. That was really interesting to do, and that actually was kind of affecting. I felt genuinely hurt and insulted by her, and it helped a lot, mostly just because the fact that I’ve always admired Diane a lot, and getting to be in a very high intense scene was just professionally for me just kind of exciting.

Me: Is there anyone else you would love to work with?

Me: What would be your ideal role in a Denzel film?

Ben: Kind of whatever Denzel wants, you know what I mean? Maybe I’m the guy who carries his bags, and I’m like, “here we are boss! Where to next, boss?” I would do anything with him, anything for him. An Interview with the Cast of Forgetting Sarah Marshall 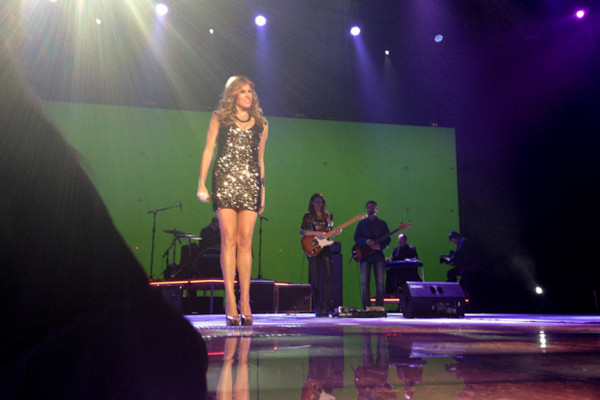