Back in May, SVV and I went away for a Memorial Day weekend trip to Kentucky with my cousin and her husband John (yes, they who produce the world’s most beautiful children). On our final morning, we got a really cool, authentic bourbon experience, all thanks to a single Tweet. Given that John is much more prolific than I when it comes to brews and spirits—my reviews are more of the “tastes good!” and “goes down smooth!” variety—and in honor of National Bourbon Heritage Month, I asked him to share his own account of our time in Bardstown. Doesn’t he just look like the type of guy from whom you’d love to take bourbon advice? During the second night of our Bourbon Trail tour, I have to admit I was a little disappointed. A few months leading up to the trip, I was on a bourbon kick and trying many small batch varieties. Thinking about this trip brought visions of finding those smaller, off-the-beaten-path distilleries and trying many new bourbons that are not available in my local liquor store. I am sure if we would have done even a little planning, we would have been able to find these little gems, but we had not. (Editor’s note: Oops!) By Sunday night we had visited Jim Beam, Wild Turkey, Woodford Reserve and Four Roses, all of which were fantastic and had great bourbons. My beef was that everything that I sampled was accessible in my hometown. I wanted something new. Leave it to Twitter to satisfy my craving.

Sunday night, Kristin tweeted that we were in Bardstown on a self-planned bourbon tour and asked if there were any recommendations. Drew Kulsveen, master distiller at Kentucky Bourbon Distillers answered immediately and gave us better than a recommendation: He invited us on a private tour of his distillery. I couldn’t have been more excited.

Monday morning we pulled into the distillery. It looked similar to the other distilleries that we had visited, only smaller—like if you took Heaven Hill, threw a little water on it and put it in the dryer. 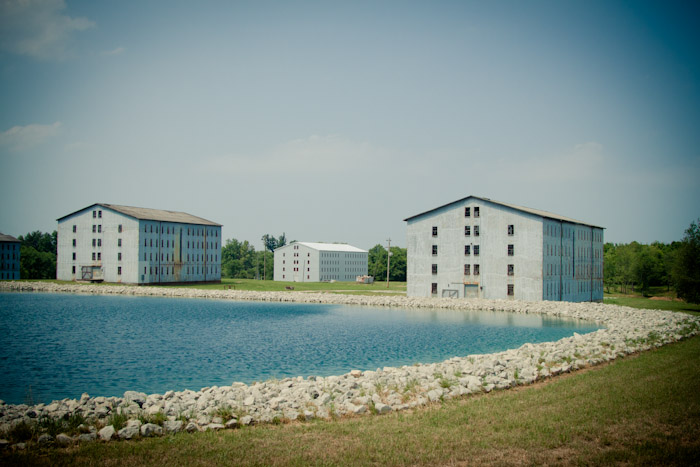 Another difference was the fact that it was almost completely empty. There was a loan car parked outside one of the buildings in the back of the distillery. It was Drew’s. Even though it was Memorial Day, Drew had come in that day to meet us and give us a private tour. He took us around and walked us through the process of making whiskey. This was his family business going back several generations. The guy knew how to make whiskey—great whiskey even.

He showed off some of the latest renovations and new stills that they had recently installed. My favorite part of the tour was getting to see barrel number one which was filled in 1927 by Drew’s grandfather. A few years back on what would have been his 103rd birthday, Drew and his family celebrated by opening it up and having a few in his honor. I wish I could have been a fly on the rickhouse wall that night.

Drew then took us to their shop and let us sample a few of their bourbons and ryes. All of which were unique, complex and most importantly delicious. SVV and I each bought a couple of bottles to enjoy at a later date. I also picked up a freshly dumped barrel that I will use to age beer in this fall. (Editor’s note: Not the first time we’ve transported a bourbon barrel in the back of my mom’s SUV!) Other than the bottles of bourbon filling our trunk on the drive home, I can’t imagine a better souvenir—or one that will get more use—to have brought back with me. Visitor’s Tip: Since our trip to Willett in May, the distillery has started to offer free tours to the public. Give them a call if you’re in the area and interested in visiting.