Paint It Female: We’re Celebrating the 19th Amendment with Walls for Women!

I mentioned that over in our neck of the woods, we’re working on three big things that will consume most of our year. The first is the travel media conference in Franklin we announced last month, and the second is a state-wide mural festival across Tennessee celebrating women and the centennial of the 19th Amendment. And today, International Women’s Day, just seemed the perfect time to tell you about Walls for Women and why we’re doing it. The 19th Amendment and Tennessee’s place in history

While many states like Wyoming may have granted women voting privileges 50 years before it became federal law, the country as a whole has only allowed women to vote since 1920—and it almost didn’t happen. On May 21, 1919, the House of Representatives passed the 19th Amendment, and two weeks later, the Senate followed. But it required three-fourths of the individual states to ratify first.

More than a year later, that would finally happen when Tennessee became the 36th and final state to ratify the amendment; even then, that almost ended in a stalemate (tied at 48-48), but one woman, Phoebe Burn, talked her son into voting in favor of women. Harry Burn was about to vote against it until, on the morning of the vote, our muse “Miss Febb,” as she was known to friends, sent him a note that said:

“Hurrah, and vote for suffrage! Don’t keep them in doubt. I notice some of the speeches against. They were bitter. I have been watching to see how you stood, but have not noticed anything yet.”

She signed off with an endorsement of suffragist leader Carrie Chapman Catt, imploring her son to “be a good boy and help Mrs. Catt put the ‘rat’ in ratification.”

The good boy that he was, he listened to his mother. The next day, defending his decision to the assembly, he stated: “I know that a mother’s advice is always safest for her boy to follow, and my mother wanted me to vote for ratification.”

It’s important to note that the 19th Amendment did not, in fact, grant all women the same ease with which to vote; African-American women, despite being allies and key players in the suffragist movement, were not all afforded the same rights, nor were Native Americans, Asian immigrants and other women of color. Racism and deadly violence, particularly in the Deep South, often crushed the attempt of non-white women to cast a ballot through these horrific bullying tactics and other administrative roadblocks, like paying a head tax or being forced to take a test interpreting the Constitution, tasks their white counterparts were not made to do. 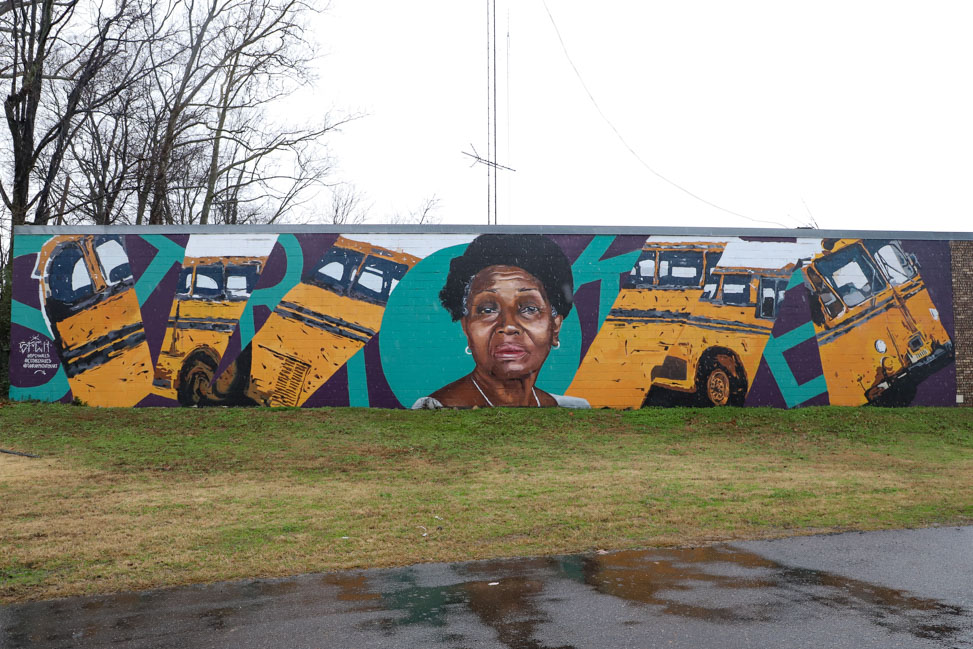 It took even more death, protests and assassinations before, toward the end of the Civil Rights Movement in 1965, President LBJ passed the Voting Rights Act, which expanded the 14th and 15th amendments by, in part, banning racial discrimination in voting practices. The narrative of voting rights and common decency between human beings is an ever-evolving challenge in the United States, and while woman’s suffrage is but a small piece of our growth as individuals and a society, the rightful place of Tennessee as an epicenter for positive change in our history is worth celebrating—as are women—and we are proud of that. 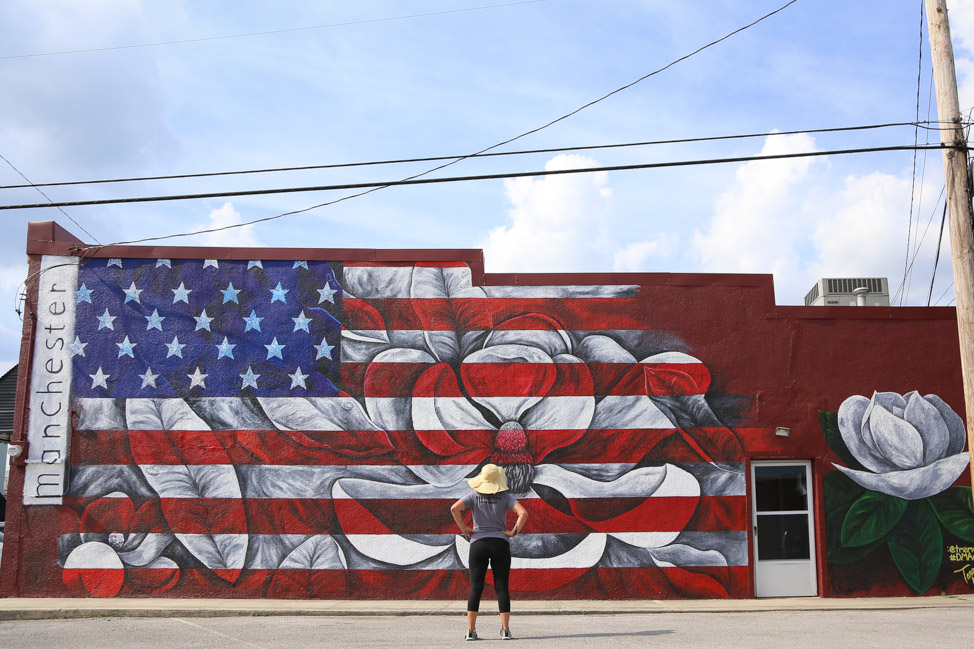 How Walls for Women came to be

This time last year, I was working on the 2020 Tennessee Vacation Guide, which you can read or order a free copy of here, and one of the pieces I was assigned focused on important women in Tennessee’s history, from Dolly Parton to Pat Summitt to many modern-day restaurateurs, distillers and other powerful female entrepreneurs. As a female-run nonprofit, trying to effect change through the application of a thin layer of paint on worn-out buildings, I wanted to be on the right side of history, and so I floated the idea of doing an all-female mural festival across the state of Tennessee to SVV.

He thought I was crazy to contemplate the logistics of putting in, within a one-month window, public art across our sprawling 440-mile wide state but has always gravitated toward female artists and immediately synched up with my concept to become a hardcore advocate.

And here we are, one year later, doing just that.

Our fall ARTober festival, which came about due to the generous support of Jack Daniel’s and sheer willpower, allowed us to test the waters of how this would work, as we installed five murals in a five-week period. For Walls for Women, we will double that amount in the same period of time. We’ve met so many talented female muralists in both our local work within Tennessee and our journalistic research about revitalization, creative placemaking and artistic communities across the country. And yet, the mural scene remains predominantly male, like so many other industries. It’s just a fact that the visual arts community is underrepresented, and we’re choosing to work with female artists not as an attack against the institution of men, but as our own way of honoring the fact that without the counter-narrative of freedom for all women, we’d all be in a decidedly different world, one that would lack empathy and intuitive strength in addition to being nowhere near as pretty.

Walls for Women is our chance to subtly shift that narrative by hiring female artists to leave their own piece of history behind while showcasing their immense talents and deep understandings of creative works.

How Walls for Women will work

The first week of this year, DMA-events, the 501(c)(3) SVV and I co-founded two years ago, put out a call to any city, chamber, CVB or small business in Tennessee who wanted to be a part of Walls for Women; much to our surprise, we were immediately met with more than 20 enthusiastic responses from towns of all size across the state who wanted to be a part of this greater initiative. We have about 10 confirmed locations, so we’re closing all additional participation off on March 30, 2020.

If you, as a business who owns a wall or a city government who believes in creative placemaking and artistic freedom, want to be a part of Walls for Women, email me and I’ll tell you more. So far, a few of the cities involved that we can divulge include McMinnville, Maryville, Knoxville and likely Nashville, where we’ll end the final install on Aug. 18, the actual centennial. Installations begin on July 18 and will take place on a rolling basis. As usual, SVV and I will be prepping all the walls—in addition to coordinating with the artists and property owners, handling all logistics, photographing, marketing the pieces, etc.—and the roll-out is dependent on artists’ schedule, our other murals going up and, of course, weather. We’re hoping for a dry summer after the rainiest winter I can remember!

We’ve already gotten a number of press inquiries thanks to our champions within the state tourism office, so you’ll be reading and hearing a lot more about Walls for Women in upcoming magazine articles, newspaper pieces and TV segments this summer.

It’s important to note that while all the original art for Walls for Women will be painted by women (duh), the content of the murals will not necessarily be suffrage-themed. We believe in artistic freedom, so the professional artists we choose will be allowed full creative liberty to create what’s in their minds, hearts and skillset. Art ceases to be art once it starts to take direction.

We’ll also have a voter registration component taking place at each installation and the cut-off for Tennesseans to register to vote isn’t until October. Voter participation is nowhere near the levels it needs to be for a functioning democracy, so if you represent a voter league or women’s suffrage nonprofit and would like to help with this side of the festival, we would love your assistance. A women’s suffrage mural we stumbled upon in Cheyenne last month. OK, Universe, we see you.

This isn’t our only mural project for the year—we’ve got some other really fun things in the pipeline that I can’t wait to share—but definitely the biggest. We’ve devoted a lot of time over the last six months to planning and liaising with city participants, sponsors and other partners, and it feels good to finally have this out there in the world.

Questions about Walls for Women? You can also comment below if you’re interested in getting involved, and we’ll get back to you! From Projection Mapping to Murals, the Cincinnati Art Scene Is Red Hot Art, Brews & Rockets: Your Itinerary for a Weekend in Huntsville, Alabama Hebe’s Mark on McMinnville, Tennessee and the Mural in Her Honor