Amsterdam in Bloom: How to See Tulips in Holland

Written by Kristin
You are here: Home / Blog / Netherlands / Amsterdam in Bloom: How to See Tulips in Holland
[shareaholic app=”share_buttons” id=”20872686″]

If you’re like most travelers going to the Netherlands, you have one goal: to see the tulips in Holland. I don’t blame you; they’re quite the sight and well worth seeing—if you can catch them at the right time, that is. I hope you don’t have allergies, because if so, you’re very well going to need a box of tissues by the end of this post.

This post was last updated in May 2022 and contains affiliate links.

A history of tulips in Holland

As it turns out, tulips haven’t been in Holland all that long—at least not in comparison to Europes’ rich history. In as recent as the 17th century, they were considered a novelty and had been introduced to the Netherlands from Asia via Turkey the century before. The trade in tulip bulbs reached critical mass in 1636, only to crash the following year, leaving many traders and farmers completely broke. In the centuries since, tulips have popped up frequently in famous paintings that hail from Holland and become a bit of a marketing schtick for the small country as a whole. 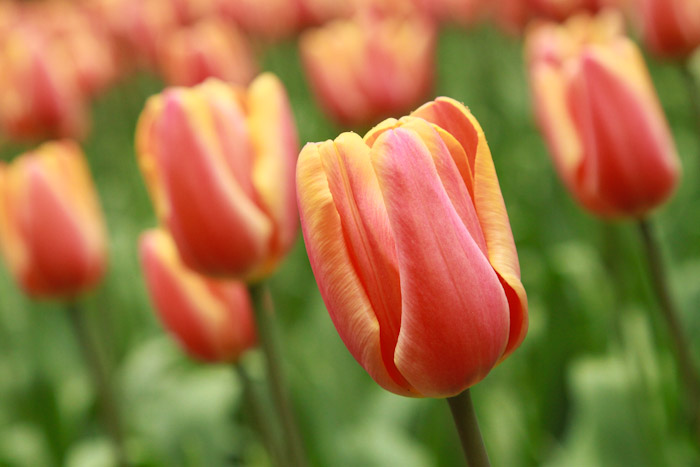 When to go to Holland to see tulips in bloom

Here’s the catch about seeing tulips in Holland; it’s like any natural phenomenon in that, ultimately, Mother Nature makes the call. I’ve been to Holland three times in March, only to not absolutely nothing in bloom, and on this recent trip to the Netherlands in April, we were there at the very beginning of the season. Right now is actually optimal time to see tulips in Holland. Plenty of other flowers (crocuses, daffodils, hyacinths) were already out in all their colorful glory—and oh so gorgeous to see—but we only really saw the early bloomers of tulips starting to pop out. If you want to be guaranteed to see tulips in Holland, plan your trip for late-April (but also know you’re going to be up against the crowds if you choose to visit during peak tulip season). Now, there’s a catch. If you’re OK paying to visit Keukenhof Gardens in Lisse, as my friend Layne and I did many years ago, you can see tulips anytime during a two-month span in the spring. The cold, dreary weather actually worked out in our favor that spring as we were visiting Holland in mid-May when tulip season is usually on its way out, but the tulips were such late bloomers that year, we hit at the perfect time. This botanical garden in Lisse, just 25 minutes outside of Amsterdam, is beautiful and well worth the trip, but just know that  thousands of tourists will also be making the tulip pilgrimage here. We drove by there again a few weeks back, and the parking area was absolutely packed with cars. You can reach Keukenhof Gardens by bus or take a full-day tour of tulip fields in Holland. Keukenhof is only open eight weeks of the year, a schedule which changes annually depending on the weather. Millions of visitors hit the park each year during this tight window. You can easily hop on a tour group out of Damrak in Amsterdam, but you can just as easily save a few bucks, take a bus out from Schipohl for a couple euro. With 32 hectares—and more than seven million flowers—you need a solid few hours to see everything worth seeing. Layne and I just had two and didn’t even make it to half of the park. Even though the whole place is a bit like Disneyland, we didn’t care. It was insanely gorgeous, and I couldn’t have imagined just how much I would have loved this tourist theme park. It’s well worth paying the $20 entry fee to see this magnificent garden. If you’re in Holland for just a day on a cruise and want to see more than just Keukenhof Gardens, there are plenty of tour options for that, too:

Where to see tulip fields for free in Holland

Now the good news is that even if you don’t want to visit Keukenhof, there are plenty of places to see tulips for free in Holland if you have access to a car. We drove north from Den Haag along A44, and once we neared Lisse, there were flower fields in every direction! A popular pastime is to rent bikes and cycle all throughout the Lisse region. There are bike paths everywhere, and were it not raining our whole trip, we would have done this, too. You can rent bikes here. There are also plenty of tulip festivals around the country like in Amsterdam, as well as Holland’s longest tulip route: more than 100 kilometers of 2,500 acres in the Noordoostpolder in Flevoland. I’d love to go back during Tulpenroute Flevoland, but we were just two weeks too early this time. To find the free fields, we followed this handy map created by Bollenstreek, which led us past thousands of flowers. This site also tells you what is in bloom when.

Have you ever visited Holland in tulip season? Is it on your bucket list? TwitterFacebookWhatsAppGoogle+BufferLinkedInPin It
31 Things to Do in Memphis: A First-Timer’s Guide to Tennessee’s Largest City April 2022 Highlights: The Highs + Lows
SHARE
[shareaholic app=”share_buttons” id=”20872682″]
JUMP TO COMMENTS
YOU MIGHT ALSO ENJOY

Zaanse Schans: A Playland in the Netherlands Just Outside of Amsterdam