13 Tips to Help You Survive Travel This Summer

The stories are true—it’s a mad, mad world out there right now, particularly if you find yourself flying anytime in the next few months. But this shouldn’t deter you. There are plenty of ways to prepare yourself to survive travel this summer. 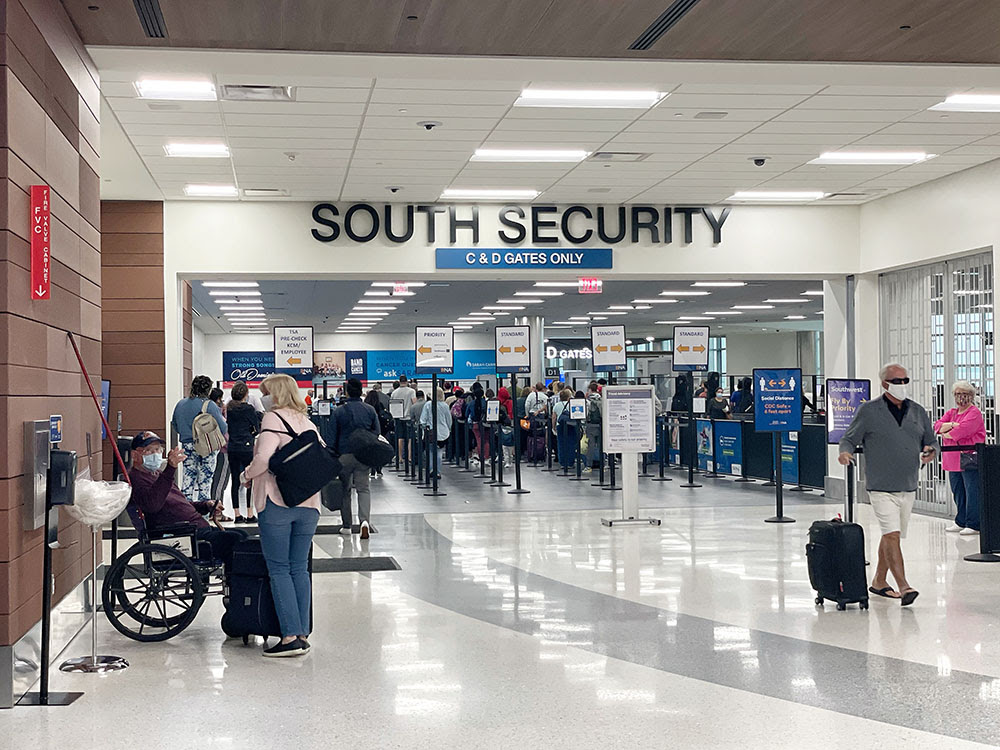 As we head out on our own summer adventures, I’ve noticed a lot of fear among online communities, from lost luggage to terrible flight delays. These are unavoidable, unfortunately, however there are measures you can take to reduce the risk of chaos happening to you when you fly.

You know my MO: If I’m traveling for two weeks or less, it’s all in a carryon, always. There’s simply no way I’m going to be the victim of lost luggage again. I’ve tried out so many different bags, and I haven’t found any as durable (or expandable) as my go-to Samsonite soft-sided spinner. I’d also recommend your personal item be a backpack that fits over your luggage handle and has many pockets. This is my latest favorite backpack to take on a plane.

Not checking bags is the easiest way to survive travel this summer and make your flying far less of a headache. 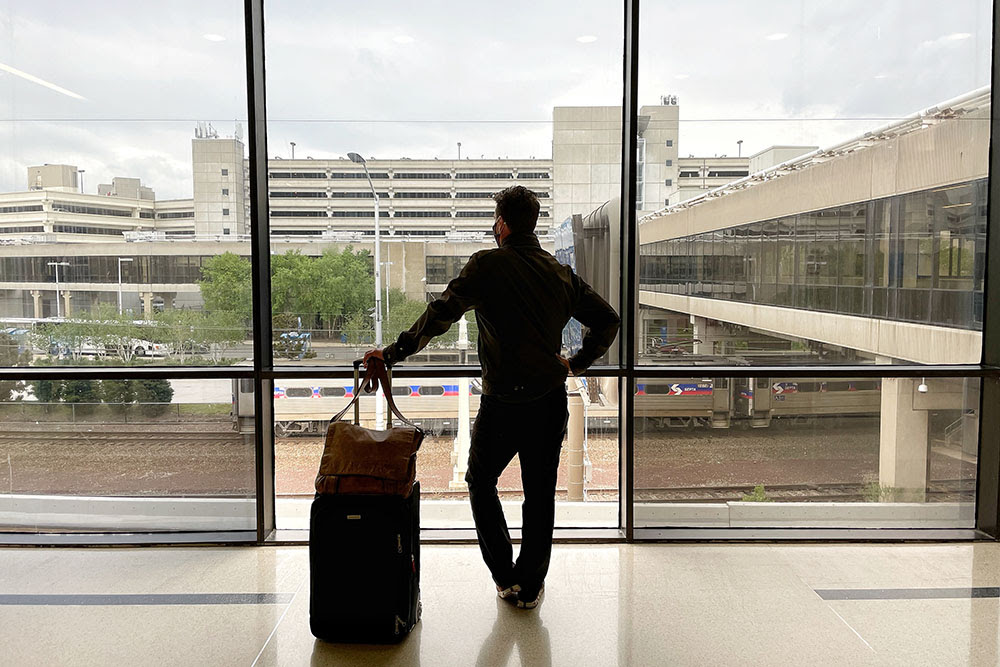 And if you absolutely have to check a bag, use a bag tracker like this AirTag so at least you know where your luggage is if the airline loses it.

While, yes, I’m a CPA’s daughter always looking for a deal, I’ve also learned the hard way on getting whatever cheapest economy fare is available. You don’t get to choose your seats in advance, which semi-stresses me out on international flights, and you also are often the first one to get the boot if something happens. 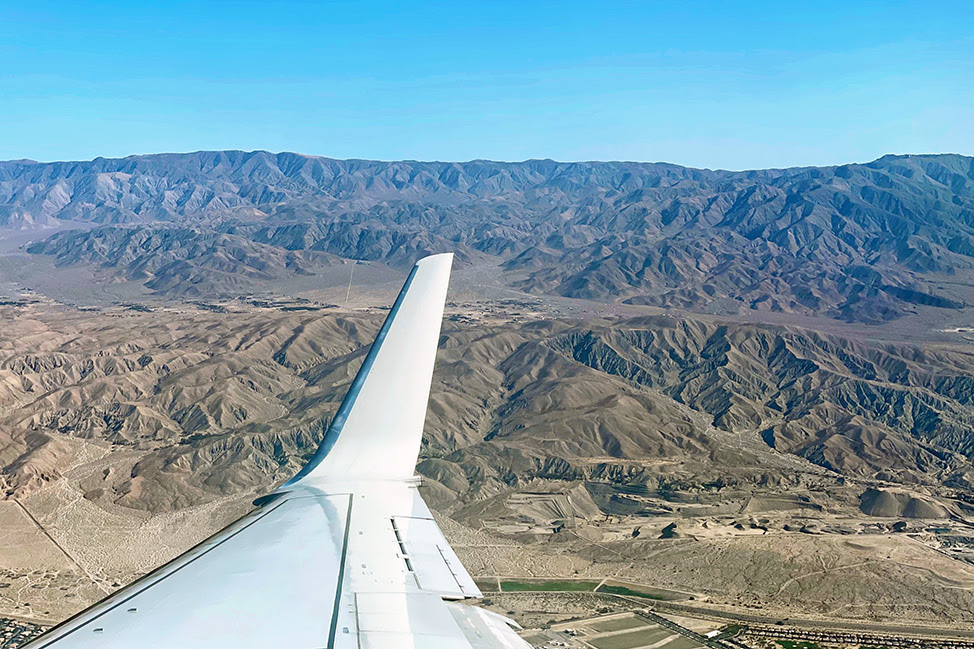 Am I saying to spring for business class? Not unless you can afford it. But I do recommend going for the Main Cabin or whatever the equivalent class is on your preferred airline. Another bonus of this is that you can likely use points or pay a small fee to upgrade to Economy Premium right before your flight if it isn’t fully booked.

Pro tip: I always use Google Flights to find the cheapest days to travel, then book directly through the airline. Some airlines, like Southwest, however, don’t always show up when you use this method, so bear that in mind.

I’ll admit that I haven’t actually had trouble flying this summer—yet—but I’ve also only flown in and out of Nashville and Savannah, both smaller airports. I’ve seen horror images from Denver, LAX and other major hubs, so when possible, I’m opting to fly into smaller airports and skip the big guys in general. 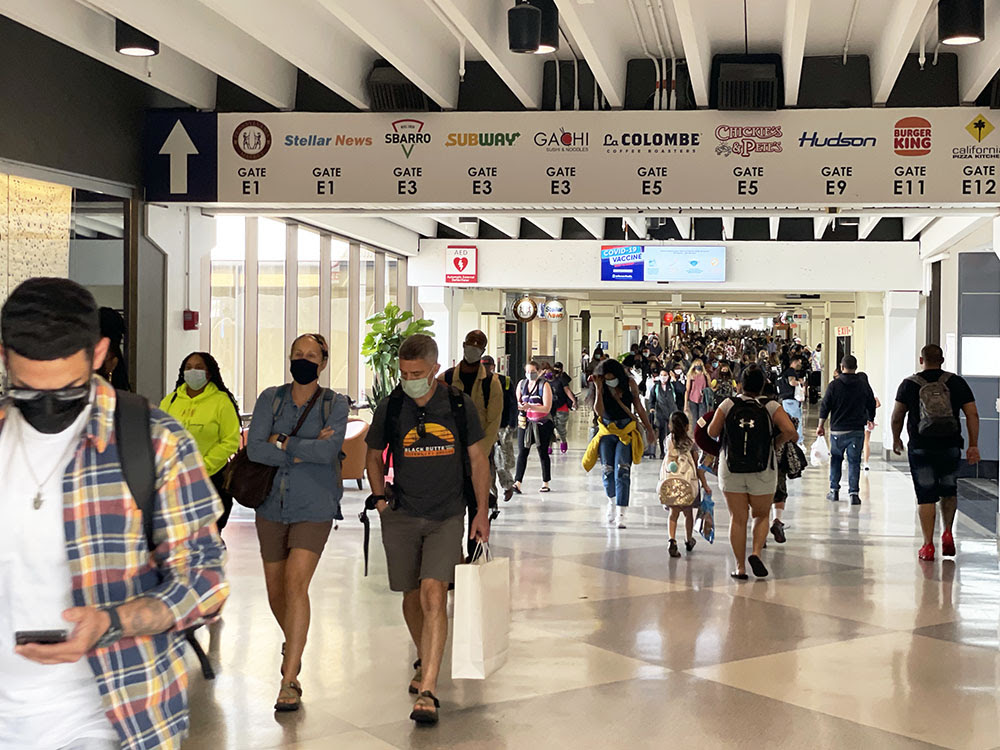 4. Book the first flight of the day

I know, I know, I also hate getting up at 4am for a flight. But if it means less travel hassle, I’ll do it.

The truth of the matter is that the earliest flights of the day have less chance of being canceled or delayed. And if they are delayed, there’s all day to squeeze them in, whereas if you fly in the afternoon or evening and find yourself delayed, you may very well be bumped back to the next day.

5. Also fly direct when you can

It only makes sense, right? Due to the law of probability, you’re going to have a higher chance of something going wrong if you’re taking two flights rather than one. If it’s the difference between $30 or so to fly direct versus taking a connection, always splurge for the direct flight.

I’m typically a get-there-exactly-an-hour-in-advance kind of traveler as I have PreCheck and never check bags. However. These days even I am arriving two to three hours earlier than usual. 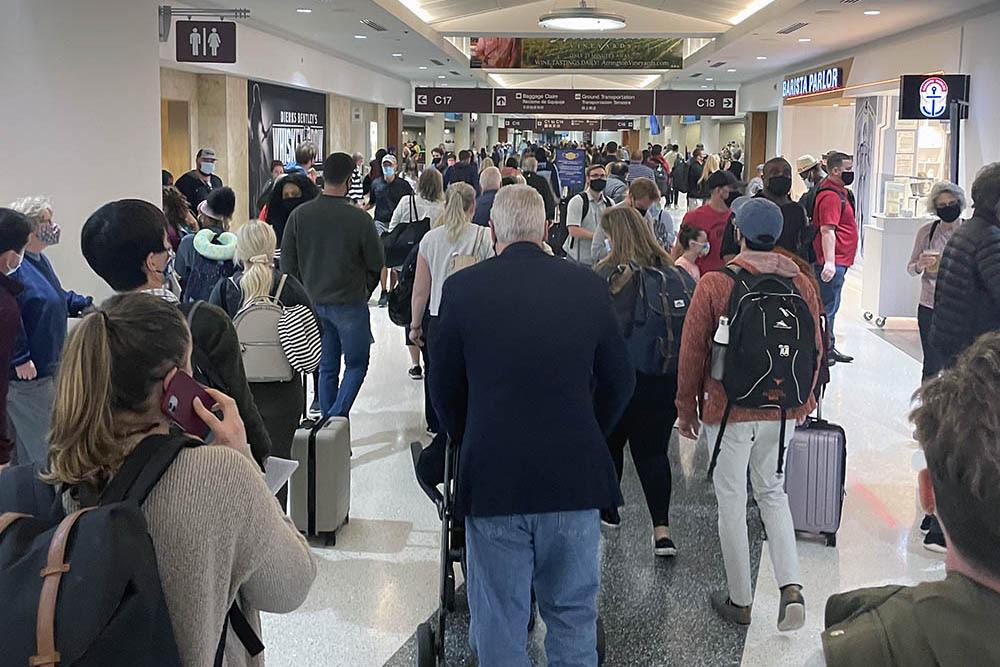 TSA lines seem to be longer than usual, even when you have PreCheck, and there’s no point taking a chance that you might miss your flight in these precarious travel times.

7. And also fly in the day before you need to be in your destination

Going on a cruise? Attending a family get-together? Plan on flying in the day before you need to be there so that you have a bit of padding should there be delays or cancellations.

8. Get TSA PreCheck if you don’t already have it

While it will take a while to get an appointment and then you also have to get approved, it’s better to go ahead and bite the bullet now than wait until later to get TSA PreCheck ($85 for five years). And if you live somewhere that has a Department of Homeland Security office that holds Global Entry interviews, get that instead, as it’s just $100 for five years and includes PreCheck.

Pro tip: Many credit cards like mine, the Chase Sapphire Reserve, cover the cost of Pre-Check for card holders, so check and see what your benefits are as it very well may be free.

9. Or drive when you can

Sure, gas is expensive, but if it’s a choice between a one-hour flight with the possibility of never making it out of the airport or a seven-hour drive, I’d opt for the drive at this point. Besides, if you’re traveling with others, a tank or two of gas is still cheaper than purchasing multiple seats on a flight when airfare is at an all-time high. 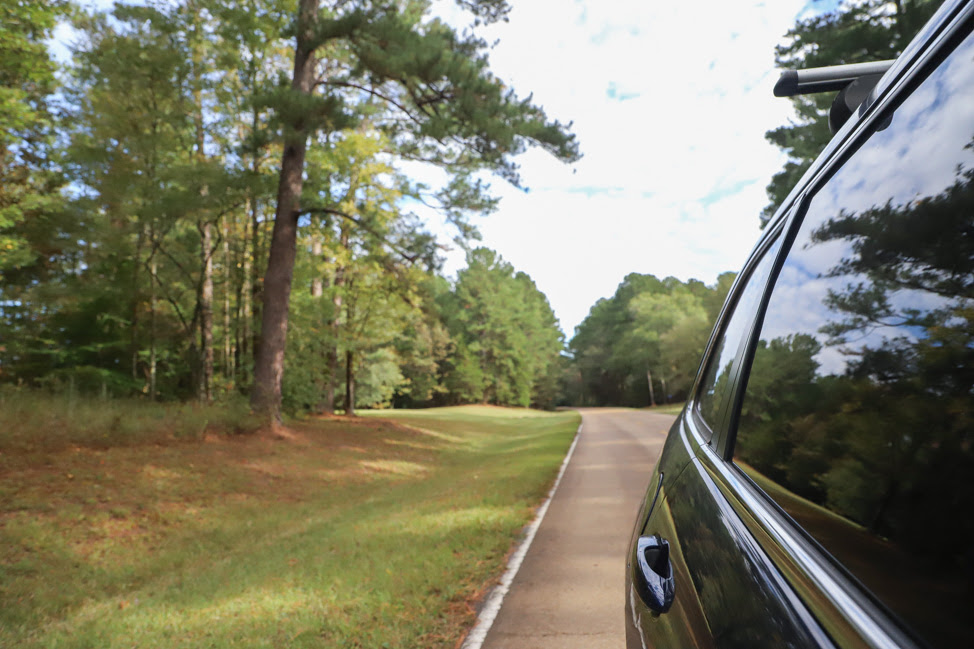 And if you are making those short-haul flights, I recently learned from responsible tourism consultant JoAnna Haugen that you can always offset carbon emissions from your trips using a service like The Good Traveler to calculate your carbon emissions if the company doesn’t offer this directly (though I also learned that Southwest does have a carbon offset program). Similarly, Tomorrow’s Air actually removes carbon versus offsetting it if you’re looking into ways you can travel more responsibly.

10. Know your mask requirements + where virus hotspots are

As I plan for a trip to New York, I’m upping my safety when it comes to protecting myself against the virus. NYC is currently having huge numbers, and masks are still required in some places like Broadway shows. Regardless, I’ll be wearing one in the airport, on the plane and in any crowded places like the subway even when they aren’t required. The last thing I want to bring back as a souvenir is that-virus-who-shall-not-be-named. 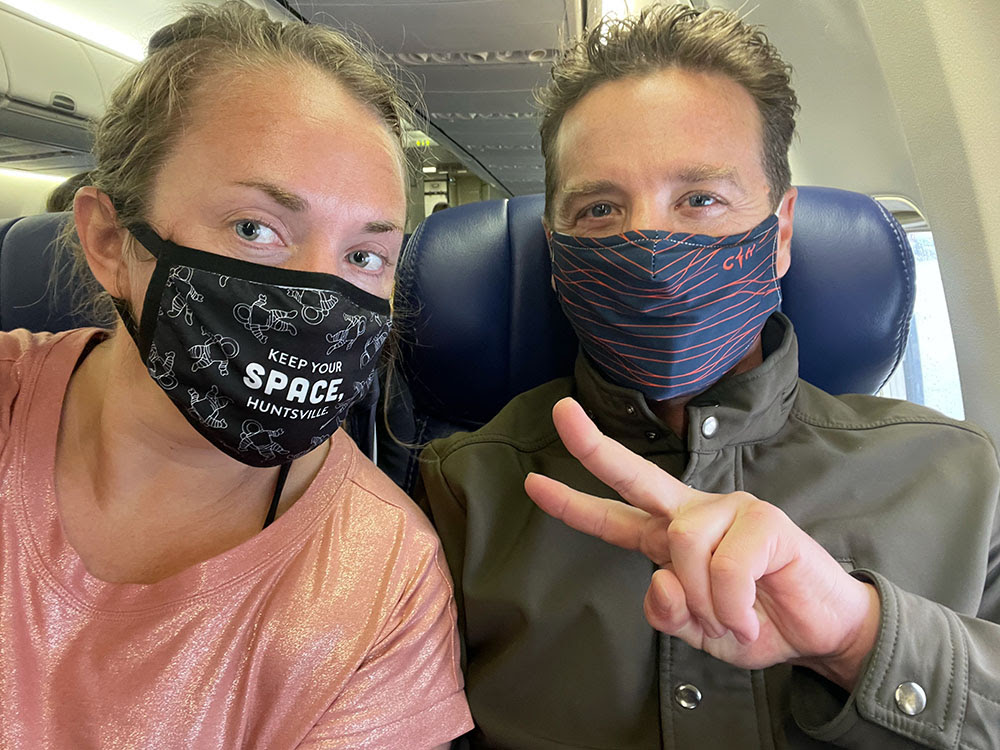 I’m a big proponent for exploring your metaphorical backyard, and so many of my best trips over the last decade have been in the South within a few hours’ drive of my home. This has led me to my obsession with Huntsville, my extensive exploration of the Natchez Trace Parkway and my discovery of new-to-me vacation spots like Dauphin Island. 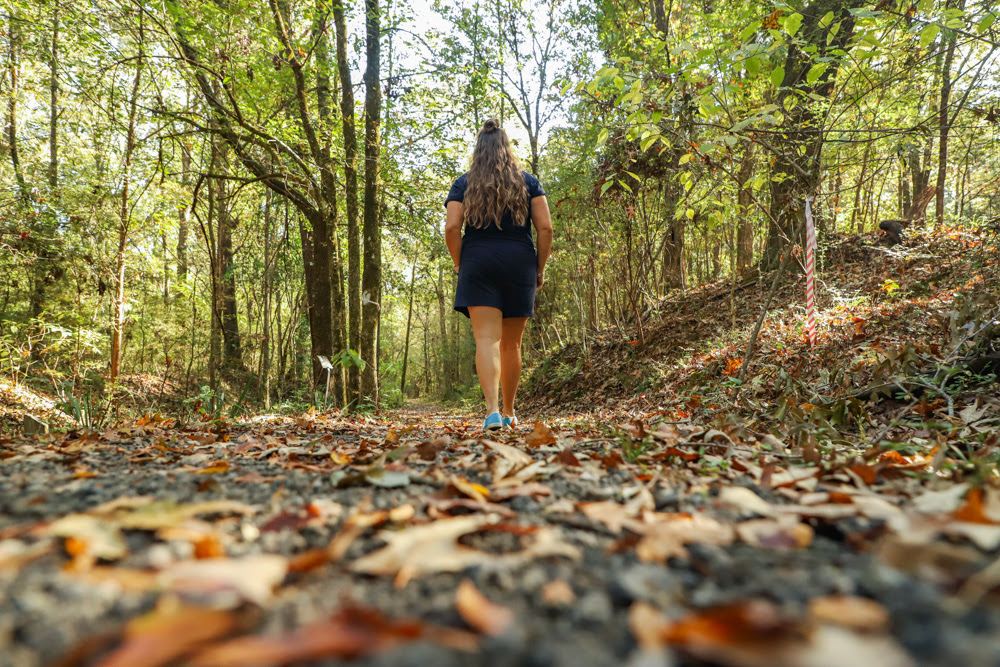 Don’t neglect the area in which you live. An adventure doesn’t always have to mean a long plane ride.

For the past 18 months since restrictions started being lifted, I’ve traveled to Philadelphia, St. Petersburg, Palm Springs twice, Austin, Iceland, Holland, Savannah and several other U.S. cities. One common denominator, particularly when traveling in America? Reservations are imperative. 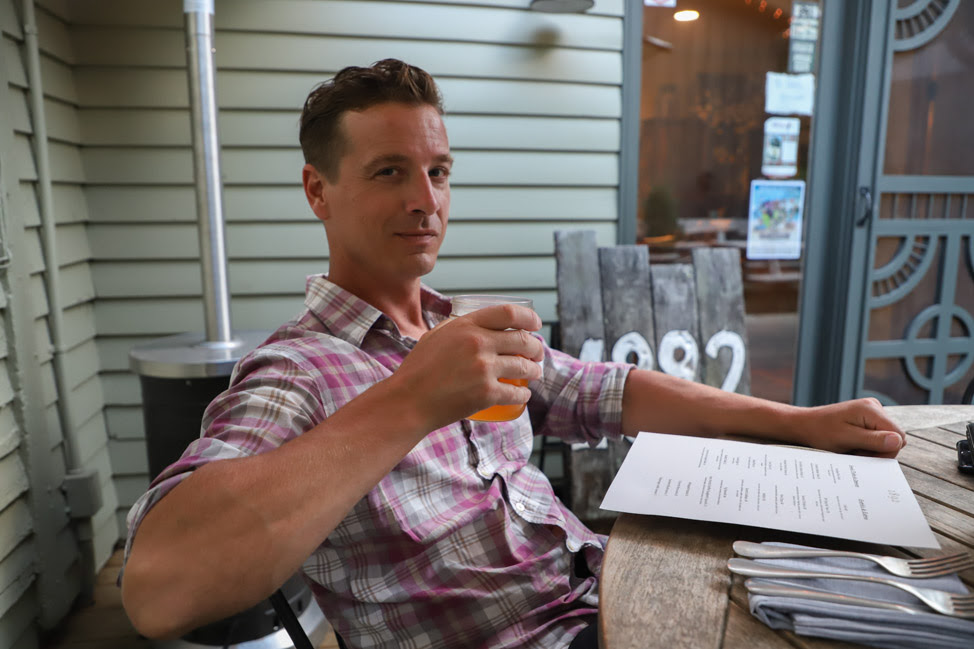 I used to be more of a fly-by-the-seat-of-her-pants kind of traveler, but not anymore. When I didn’t have a restaurant reservation, I found myself either waiting hours for a table or, worse, getting sub-par takeout. And as a foodie, there’s little worst than a less-than-satisfactory meal when traveling somewhere new!

This also applies to museums and observation decks like the Empire State Building or One World Trade Center, as many are still limiting the number of people who can enter at any one time. The further you plan out, the better off you’ll be. 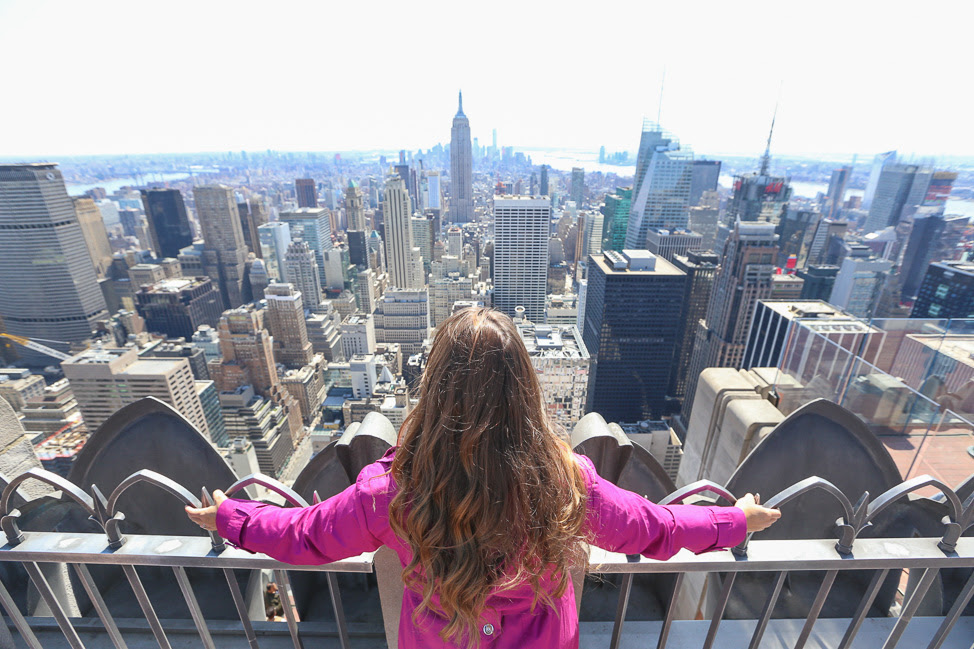 As someone who gets easily frustrated, I understand the inclination to get angry when things don’t go your way. But if you go into summer travel with a mentality that things might go awry, you’re less likely to get upset when they do. And if that does happen, remember there’s a customer service person on the other end of the line—kindness will get you a lot further than yelling does. 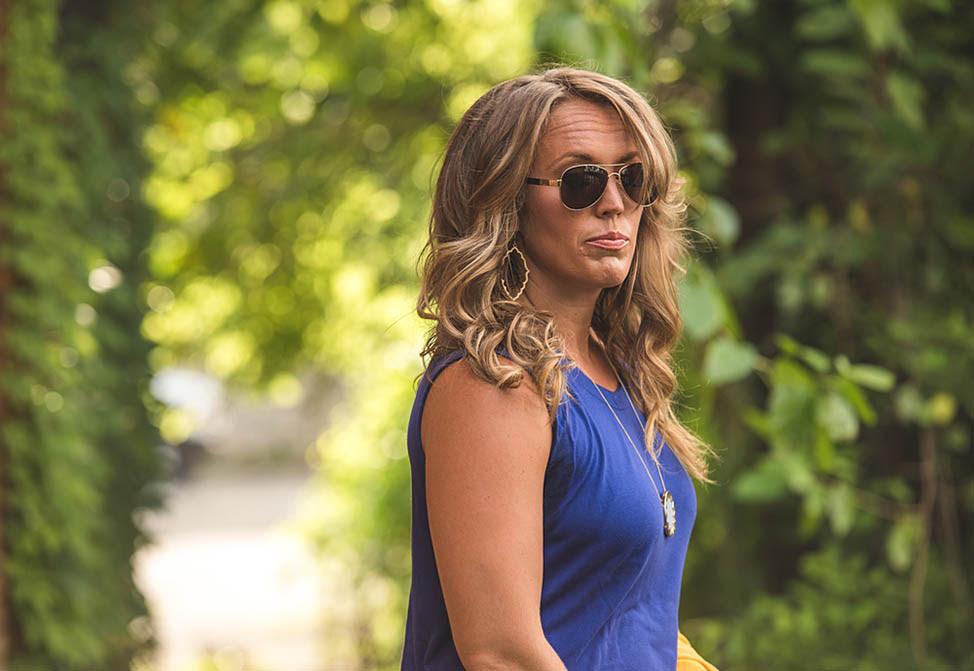 What’s your top tip on how to survive travel this summer?

Camels & Chocolate uses affiliate links when possible to keep the site ad-free and help offset operation costs. All opinions are our own.

TwitterFacebookWhatsAppGoogle+BufferLinkedInPin It
June 2022 Highlights: The Highs + Lows How to Take Better Vacation Photos with Your iPhone
SHARE
[shareaholic app=”share_buttons” id=”20872682″]
JUMP TO COMMENTS
YOU MIGHT ALSO ENJOY

How to Take Better Vacation Photos with Your iPhone

Packing for Semester at Sea: Four Months On the Ocean

How to Be the Best Airbnb Guest You Can Be