Written by Kristin
You are here: Home / Blog / North America / Surprise! My Sister Got Engaged in Charleston
[shareaholic app=”share_buttons” id=”20872686″]

Which is perhaps not actually a surprise to all of you who follow my social media, as Josh’s sisters, my mom and I were not shy about sharing the good news over this past weekend. We can’t help it; WE’RE JUST SO EXCITED. Still, Kari had no idea it was coming, which made it all the more fun for the rest of us. Well, I have a feeling she knew Josh was going to propose at some point in the future, but actually didn’t know when or how.

Actually, if we’re being fair, I have an inkling she thought it would happen the night before, on her birthday, observed. My parents were meeting his for the first time, and his entire family was present in Charleston to celebrate Kari’s (26th) and my mom’s (more-than-26th) birthdays. But that night came and went, and her hopes were dashed.

Because he didn’t do it then.

Kari and Josh met a little over three years ago when he was working at the Big Four firm where she was interning. (Before you get your feathers ruffled, they are only three weeks apart in age, and she was in grad school while he had graduated from college early to go straight to work.) They immediately hit it off, became fast friends, spent a lot of their time off that summer hanging out, talked frequently her whole year back in Knoxville.

Before she even moved to Charlotte for good in October 2012, Mom and I knew they were going to be an item. She talked to him almost every night during our three-week trip to Scotland and Ireland that previous month. He was there to move her in the day my mom rolled into town with her. I don’t think they’ve been apart since—especially since they work on the same team at their jobs. Scandalous!

A little over a month ago, Josh was visiting Tennessee for the weekend and came out to visit SVV and me at my dad’s office. He walked in all nonchalant and said, “hey, are you guys coming to Charleston when your parents do next month? Because I’m going to propose to Kari.” At which point, SVV and I lost it. Obviously, we were hoping it would happen eventually, but this was the first we’d heard of it—and we’d spent several weeks with Josh in Europe this summer—and the two of us couldn’t wipe the goofy grins off our faces. It was really hard acting normal around my sister that night; good thing we’d only see her for an hour or so before she headed back to Charlotte. For the weeks that followed, I tried to avoid talking to her on the phone much, as secrets are reaaaaaaaal hard for me. (Consider this your warning should you be thinking about sharing some big confidential news with me in the future.)

Ever since then, it’s been a very hush-hush Project: Get Kari Engaged mission around our house. My parents were going to be there with their best friends, who would drive back to Tennessee early on Saturday. Since I couldn’t get down there till Saturday at the earliest—I was on a campaign for Travel Mindset in the Caribbean, which had been scheduled eons ago—Josh decided to do it that night, instead of Friday. SVV would leave at the crack of dawn to drive the eight hours from my parents’ house, where he was dog- and house-sitting for them, to Charleston, where he’d pick me up from the airport. I already had a flight back from Grand Cayman booked for the day after he planned to propose, but I was on the Internet trying to figure out how to change that the second he told us. As it turns out, Grand Cayman to Charleston? Let’s just say, not the easiest route to figure out. But in the end, I was able to do a bit of travel hacking and use Chase Sapphire credit card points to fly Cayman Airways from Georgetown to Miami, then American Airlines from Miami to Charleston. I was set to land at 3:30pm, but during my four-hour layover in Miami, heard from Josh that he wanted to propose earlier than the 6pm scheduled time. CUE: PANIC MODE! What if I were delayed? What if I didn’t make it at all? So many “what ifs,” understandable if you followed any of my travel turmoils this summer.

But I made it in time—early, in fact!—just as SVV was pulling into the airport (such convenient timing), and within 30 minutes of landing was sipping champagne in Josh’s parents’ house. We’d barely had time to meet everyone when we got the text from Josh to hightail it over to the dock a few blocks from his childhood home. We—Josh’s two sisters, his brother, his brother’s wife, his parents, SVV, my parents and I—had been there on the marsh for maybe 10 minutes when Josh and Kari, a pool of tears, came around the corner. 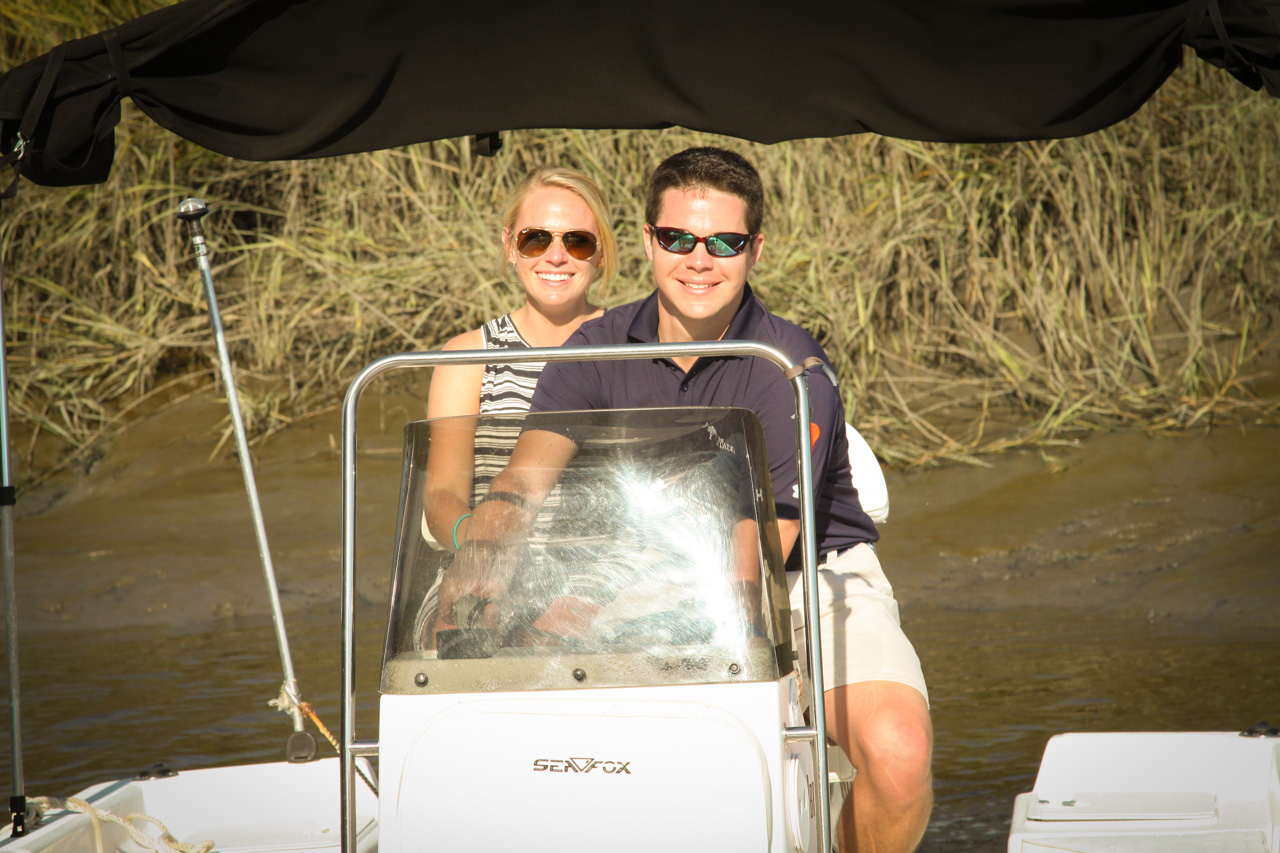 To say she was surprised was an understatement. He had taken her about 10 minutes out in the boat and proposed, though he quickly told her that my parents had stayed in town and not driven back that morning like she thought they did (my mom was afraid she might smack him if he knowingly proposed right after they had gone back to Tennessee!). But she had no idea that SVV and I would both be there; I was sort of afraid she might fall off the boat into the water once she saw us, but I think the shock of the whole situation—a fiancé! a diamond! both of their families crowded on the dock! the half-consumed Bud Light in her hand!—already had her in a daze. Josh knocked it out of the park with the ring, too. Wowza! I’m having major ring envy after seeing this beauty. That night, we had a big dinner that his wonderful mom cooked up, and the sisters’ husbands both joined us, as well. Josh has three small nephews and a 10-year-old niece who I didn’t get to meet this time sadly, but I have no doubt there will be plenty of time in the future to get to know them.

And his family is just The. Best. Seriously, I’m going to claim them as my own extended fam. Kari is so lucky (as are we all!). And having Charleston as a regular vacation destination for long weekends? Hardly a bad thing.

Bonus: Southwest flies there direct from here, and it’s so quick, easy and cheap that hopefully I’ll be able to attend all showers and parties and other wedding-related functions there as the engagement progresses. So I have another wedding to help plan. Huzzah! I love this stuff. Especially since Pinterest wasn’t around when I got married—it’s like a whole new ball game these days! 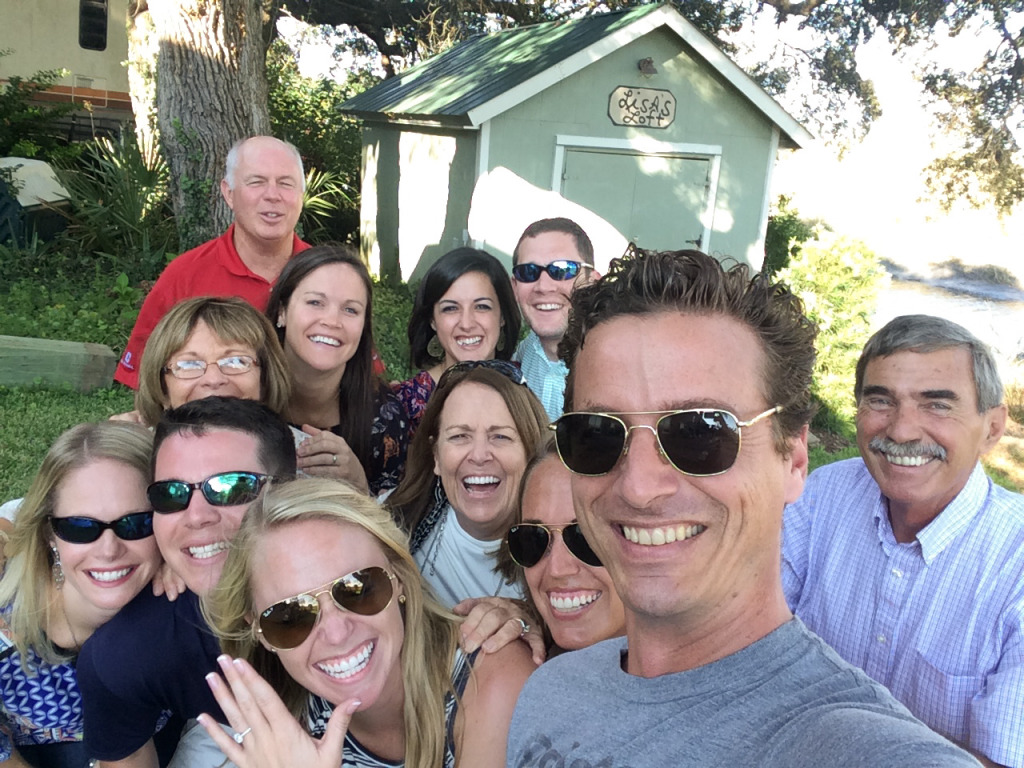 In September 2015. Or maybe August. Or possibly October. (Football could dictate a lot of that.)(Even though Josh is forbidding Kari to plan around the SEC schedule.)

In Tennessee. With this as the backdrop. (Maybe.) A lot is up in the air right now—I mean, they have only been engaged four days—but the one definite is this: MY SISTER IS GETTING MARRIED. TO HER PERFECT MATCH. JOSH, DO YOU KNOW WHAT YOU’RE GETTING YOURSELF INTO? Nevertheless, let’s pop the bubbly and cheers to the newly engaged couple, will you? TwitterFacebookWhatsAppGoogle+BufferLinkedInPin It
Love in the OC: A Southern California Wedding This is How You Write a Professional Email
SHARE
[shareaholic app=”share_buttons” id=”20872682″]
JUMP TO COMMENTS
YOU MIGHT ALSO ENJOY Bluegrass Underground: Music in the Belly of a Tennessee Cave