For America’s birthday, it only seems right to give a proper tribute to her almighty land. And though there are a dozen national parks that I think every traveler should prioritize—among them, the Smokies, Glacier, Yellowstone, Arches, Badlands and Yosemite, to name a few—there’s no denying that Zion National Park has been at the top of my list since I first visited 15 years ago. Zion is a highly convenient park to visit, as its jumping off point is just two hours north of one heavily trafficked airport: Las Vegas. And if there’s anything that prohibits folks from seeing America’s national parks, it’s time in transit and also cost. I get it, you don’t have a lot of PTO (one of the downsides of being American) and you have to spend it wisely (upside: you have so many choices!). But the great thing about the St. George region is that it is accessible over a long week (versus somewhere like Yellowstone that’s a bit harder to reach). With that said, I think we often parachute into a place like St. George that’s known as being the gateway to Zion and forget to explore the areas around it. And St. George is home to some absolute beauts of state parks and recreation areas, too. So next time you head out to Zion, promise me you’ll check out some of my other favorite area parks, too. I sang the praises of Sand Hollow on my last visit in 2016 and still think it’s one of the most diverse spots in all of Utah. Sand Hollow is the perfect place for families, adventure seekers and water sports enthusiasts alike—it’s got a little bit of everything! You can boat, fish, camp, ATV or even hook up your RV at this slick reservoir. This change of scenery is dramatically different than what you see in Zion, too, thanks to the state park’s shimmering turquoise waters that contrast against the red rock landscape. Getting there: Sand Hollow is about 25 minutes due east from St. George, though you’ll take I-15 up to Highway 9 (the Hurricane exit) to get there. It’s pretty well marked, so you shouldn’t have any trouble finding it. Pro tip: Definitely pack a swimsuit. If you want to do any water activities like kayak or SUP, there are rentals on site at the marina. There’s also a rock outcropping that’s popular for jumping off—try it if you dare (I wasn’t brave enough … on that visit at least).

On my most recent trip to St. George, I visited a new-to-me spot: the Red Cliff area. The desert terrain also has so much of what I love about the rest of Utah: lookouts, cool rock formations, petroglyphs, slot canyons and even an arch. Our group got split up while hiking this area and went every which way before finding the trail we were actually looking for (if it was marked, it wasn’t overly visible), so I definitely suggest picking up a print map from one of the area visitor’s centers before you try to venture out to Babylon Arch, lest you get lost! Getting there: The Red Cliffs National Conservation Area is mostly to the left (west) of I-15, but where you want to go is that small patch of greenery on Google Maps just to the right (east) of the interstate. The 1.5-mile trail to Babylon Arch can be accessed from the Sand Cove trailhead parking area just off off 900 N Road , which is almost four miles south of its intersection with Main Street in Leeds. There are some signs for Sand Cove once you get off of I-15, but again, they’re small so know where you’re going (GPS coordinates: 37.201971, -113.336474). Pro tip: We got lost on the way home when the desert was cloaked in a veil of darkness, so plot those GPS coordinates and know where you’re going before you get out into the wilderness and have no phone service. It’s not super far from civilization, but it sure feels like it when you’re driving around at night with no street signs for help.

This park is right smack in the middle of St. George—well, eight miles by car on major highway, so virtually—and is a treat and a half. The paved road cuts through the center of it and is popular among bikers (as well as other crazy fitness types; see below). Last year, I only had a quick half hour to pop into Snow Canyon and take some photos. This time, we went on a sunset hike and settled in for awhile as the terrain changed from yellow to pink to twilight. Getting there: Take Highway 18 from town. There are two entrances into Snow Canyon: the southern route right past Red Mountain Spa or the northern entrance near White Rock Amphitheater. It will only take you 20 minutes, tops, from downtown. Pro tip: This is by far the easiest park in St. George to explore due to its relatively easy hiking terrain and also its proximity to town. Don’t pass it up because of that! Sunset here is particularly pretty—even better than Dixie Rock in my opinion.

The swirling patterns of this remote area belong in Willy Wonka’s candy factory. The sandstone rock has been pushed and pulled in every which way, forming a mesmerizing tapestry of undulating pattern and white-and-yellow tones. We concluded our most recent InstaMeet to St. George with a group hike out here, and it couldn’t have been a more perfect end to a great weekend. 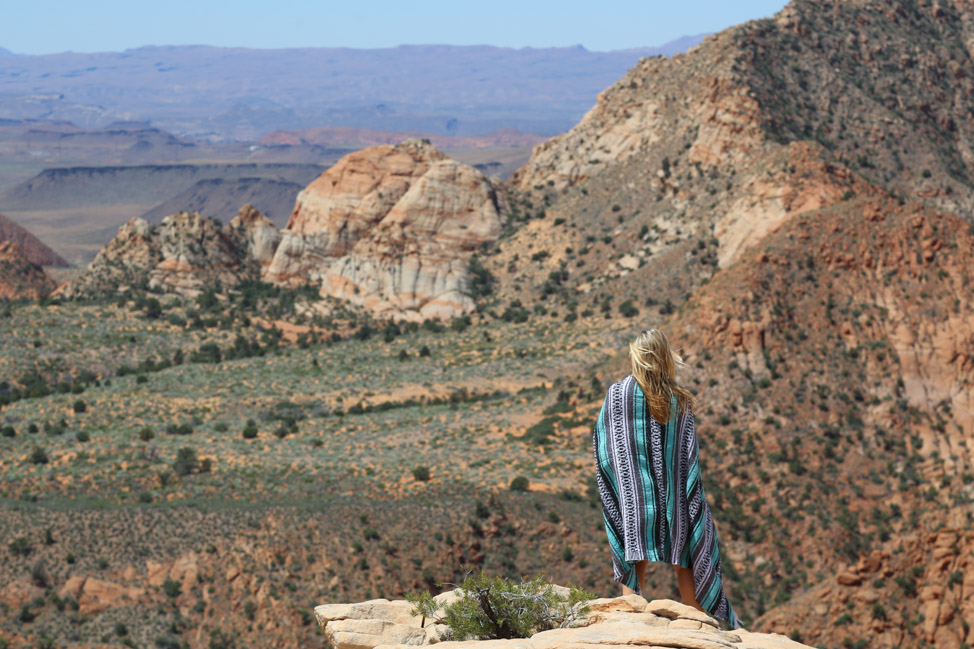 If you’ve always wanted to see the Wave, Arizona’s iconic rock formation, you can experience a very similar scene here—only without the crowds. It’s a great place to bring your kids or simply to channel your inner child as you’re going to want to run, jump and frolic all over this tantalizing landscape. (I won’t judge; I did the same!) Getting there: Yant Flat took us half an hour to reach from the Leeds post office. From there, you’ll take Oak Grove Road under the Interstate then the left fork for FR 031 after you pass under. It’s a good 25 minutes or more from there on an unpaved road, and I guarantee that you’ll think you’re lost at least once. Keep going, and almost seven miles from the time you turn onto the road, you’ll reach a small parking area on both your left and right that mark the trailhead. The flats are an easy mile walk out from there in sand. Pro tip: You need 4WD to reach this point, so don’t try it unless you’re prepared–lest you get stuck in the middle of the bumpy gravel road miles from town (and without cell reception, too!).

There are a couple other spots in the area like Toquerville Falls and Kanarraville Falls that I’m still dying to visit. Maybe on my next trip to Utah! In the meantime, what’s your favorite park in southern Utah?