Facing Fears: Diving with Sharks in the Bahamas

Written by Kristin
You are here: Home / Blog / Bahamas / Facing Fears: Diving with Sharks in the Bahamas
[shareaholic app=”share_buttons” id=”20872686″]

So we’ve established I’m the tiniest bit afraid of SHARKS. That said, did you think you would ever in a million years read a post where I talked about how I came face to face with one without hyperventilating underwater? No? You’re not the only one! You see, after Holly (also afraid of all finned things) and I had completed our first day of check-out dives in the Bahamas, we were all, “bring on the sharks! We can take ’em!” A definite change of tune from us grasping each other for dear life on the boat, whimpering, “but what if we see a shuh-shuh-shuh-SHARK?!?”

But something about getting comfortable in the water made us change our tune. Unfortunately, then I came down with the Bahamian Diet (AKA stomach flu) and was unable to join in on the fun. Holly went diving with the rest of the group—Brendal, another Holly, John, Linda, Sue and Angie—as planned, which was all good as there were many BODIES and her chances of being attacked were severely diminished. John and the nurse shark even made friends, as the shark really liked to be pet like a cat.

So after seeing the pictures Holly took and slightly getting over my bug—I was still quite paranoid about vomiting in my regulator, but alas, I was ultimately fine—Brendal took me diving the next morning so I could complete my certification. Took me diving with just the intrepid Angie, who came along for the ride, on a day when there were far less people for the sharks to feast on. The second we anchored the boat and I entered the water, I took a brief peek underwater and saw two or three Caribbean reefs circling below me. Zoiks!

As we descended 40 feet to the bottom–and I won’t lie, I was shaking in my dive booties—Brendal made me do one last skills check, which entailed taking out the regulator, removing the BCD (the life jacket thingie you wear when diving), and even removing and clearing my mask—as the sharks circled above us. 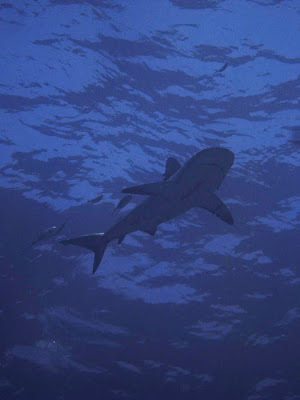 Those suckers weren’t small (nurse sharks, aside), let me tell you. The reefs and bulls were a good five or six feet in length, at least.

But you know what? It oddly wasn’t scary. They’re such peaceful, graceful creatures, I’ve come to find, that I would actually get excited every time another one swam around the corner. However, toward the end of our dive, as we were beginning our ascent, a friendly nurse sharks started circling me. Brendal motioned for me to pet it. I got closer. And closer. As did it (he? she?). It grazed my fin, and I bolted upward. I guess you can’t completely triumph over trepidation in a mere hour. I’m still kicking myself that I didn’t get to leave the Bahamas boasting that I pet a shark.

Several of you have written me that you’re terrified of the ocean and would never consider diving with sharks. I get you, I do; if anyone can relate it’s me. But it’s far less intimidating than snorkeling—at least you have a full range of vision, whereas with snorkeling you never know what’s lurking behind you—and you’re missing out on so much by not exploring life underwater (did you see The Little Mermaid and Finding Nemo? Case in point!). And if you need someone to hold your hand and accompany you to your therapist session beforehand, consider me your girl. Hang Ten: Learning How to Surf in Barbados The Best All-Inclusive Resort in Aruba A Comedy of Errors in the Bahamas: A Vacation Gone Very Wrong