Our first time visiting Romania was 11 years ago. SVV and I were living in Holland, had just met in September and, come December, decided to forgo the journey back to the States for the holidays in favor of a road trip to a new-to-us, undiscovered land.

That place we mutually agreed on wound up being Romania.

Even though it was the height of winter, we had a great time, waking up with no route in mind, driving from town to town each day protected by a wall of snow, pulling over at roadside vendors to buy wheels of cheese and two-liter Coke bottles filled with palinka (Central/Eastern Europe’s version of moonshine), making friends with the feral dog population in each stop we made. It was an unlikely choice for a winter road trip, but we were glad we’d done it. We’ve been talking about that trip for years now.

So when we found out our AmaWaterways river cruise would be ending in Giurgui, just an hour south of Bucharest, and that our Turkey extension would not be happening thanks to the political unrest, we convinced the rest of our crew to join us on a quick four-day road trip to traipse about the Transylvania Mountains instead.

We had planned to spend some time in Giurgui, but after docking there the night before—plus talking to some of the ship’s crew—we quickly realized there wouldn’t be much to do. So we called our Blacklane driver, who was transporting us to Henri Coandă International Airport (OTP) to pick up our rental car, and bumped up our pick-up time to earlier in the day, departing the port city just after lunch and arriving at the Bucharest airport an hour-and-a-half later.

From the moment our van approached the capital, we saw the effects of the European Union; Romania joined the EU in 2007, two years after we were first there, and what a world of difference it’s made. First of all, the tourism industry has expanded quite a lot; there seems to be more infrastructure in place, and while Western Europe it is not, Romania is a lot more set up for tourists in peak summer season.

Speaking of which, most of the tourists we encountered were Eastern Europeans, not those from the West like we’d come so accustomed to seeing in our travels.

After picking up our rental car, we headed straight for Brașov, which took about three hours (account for more if on Fridays or in peak season). We checked right into our Airbnb in the heart of the city and figured we didn’t need to go anywhere, because this house was a vacation in itself.

But eventually, we did leave and we were in for a bit of a surprise. Despite it being Sunday, we couldn’t find anywhere that could accommodate a group of eight for dinner without a reservation, not even a fast-casual joint. I was shocked, and a bit annoyed that the local restaurant staffs were unwilling to point us to a place that could feed us—or tell us to come back in an hour when they’d have a table ready.

It wasn’t just the unaccommodating nature, but the rudeness with which the news was delivered, a shrug that said, “I don’t know what you want me to do, but it’s not my problem and we can’t help you.”

How could this be—we’d bragged to my family about how Romania was basically the best place on Earth, how the locals were so warm and welcoming, and here we were showing them why we loved it so much, just to have the metaphorical door slammed in our face time and time again.

It then struck me that perhaps we glorified Romania in our minds a bit too much—we were young and newly in love; I’ll chalk it up to that—and maybe even traveling with rose-colored glasses. This trip back was an entirely different, eye-opening experience. While sure, we met exceptions like our host Gabriela who were friendly to a fault, the majority seemed brash and a bit rude, dismissive and unwilling to help out. I know this is just a difference in culture, but coming from Serbia where everyone was so kind, chatty and helpful, it was a bit of a blow.

But we persevered, had a good night’s sleep, and while the locals didn’t get much friendlier, we lowered our expectations and started to enjoy ourselves.

Sometimes I think being the tour guide puts a certain stress on the situation you wouldn’t have were you traveling solo. I wanted everyone to have a good time, wanted them to enjoy Romania as we had the first time we’d come here 11 years ago (my mom assured me they all did), didn’t want them to walk away having had even a remotely unfavorable encounter.

Early difficulties aside, though, Brașov wound up being the perfect place to make our base for three days and unwind after a week of waking up in a different city each morning.

A lovely resort town at the bottom of the mountains, Brașov would be my pick for a jumping off point if this is you’re first time visiting Romania (or even Eastern Europe as a whole) as it’s a more manageable size than, say Bucharest; it’s walkable if you stay in the right area; it’s close to so many neighboring attractions so you won’t spend all day every day behind the wheel of your rental car.

If you’re arriving from the direction of Bucharest, it may seem a bit like a Communist Era eyesore, but head for the city center and you’ll be charmed by its candy-colored houses and Old World architecture.

What to expect when you go to Romania:

You won’t find the friendly hospitality of other European countries like, say, the UK or Germany. So unlike we did, acknowledge that upfront and your stay will (hopefully) go a bit more seamlessly than ours.

Many people don’t speak English, and it’s not like France where they just pretend not to; they really don’t know anything but their native language. Bear that in mind and have a method of translation (like an iPhone app) handy.

Hardly anywhere accepts the Euro, and not all of them take cards either. Come prepared with plenty of leis, the native currency. There’s no shortage of ATMs, but be sure and alert your bank ahead of time. I had no trouble taking out multiple withdrawals with my Bank of America card, but one of the members of our group could not use his Visa the entire time until he returned to the United States.

Summer is definitely preferable to winter here. The downside? Castle Bran was absolutely brimming with tourists, as was Peleș, versus us having both of them completely to ourselves when we visited in mid-December.

When you rent a car, you might be overcharged. Our Expedia rental booking was supposed to be for $97 per car (we rented two); however, the rental agency charged us a total of $184 per car, claiming that it’s local tax that was tacked onto it. This shouldn’t be the case; when you rent a car, you’re doing so to lock in that rate. We’re still fighting for a refund from Expedia on this.

The roads, particularly around Bucharest, are straight-up crazy. We were using Google Maps to navigate and took quite a few wrong turns because of the loops that go every which way. Don’t rely on technology; also have a print map handy, and give yourself plenty of time to get to your destination.

Still, despite its downsides, I do think Romania is worth a second look, particularly if you’ve never been there before. Just know what you’re getting into before you go.

While I’d love to visit the Maramures region, home to the wooden churches, in the far north, I always gravitate toward Brașov at the base of the Transylvanian Mountains, as it’s an easy jumping off point to do Castle Bran, Sighișoara and several of the other attractions in the Carpathians. We stayed in a two-level, four-bedroom Airbnb rental in Brașov for a song. It was lovely, and I’d highly recommend it if ever you find yourself in Brașov.

In Bucharest, however, we used Expedia to find hotel deals, which ranged from $60 a night for a basic accommodation to $120 for something a bit fancier. 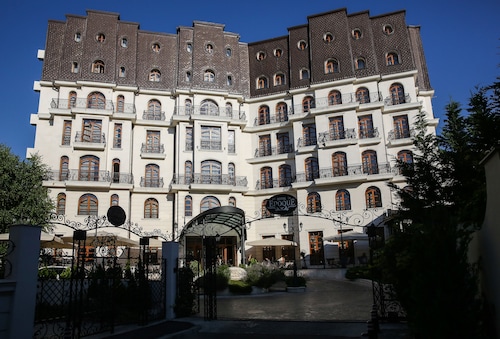 Have any questions about Romania travel? Have you been? Would you go?

TwitterFacebookWhatsAppGoogle+BufferLinkedInPin It
Bulgaria’s Wonders: The Belogradchik Rocks Romania Road Trip: On the Hunt for Dracula
SHARE
[shareaholic app=”share_buttons” id=”20872682″]
JUMP TO COMMENTS
YOU MIGHT ALSO ENJOY

Romania Road Trip: On the Hunt for Dracula