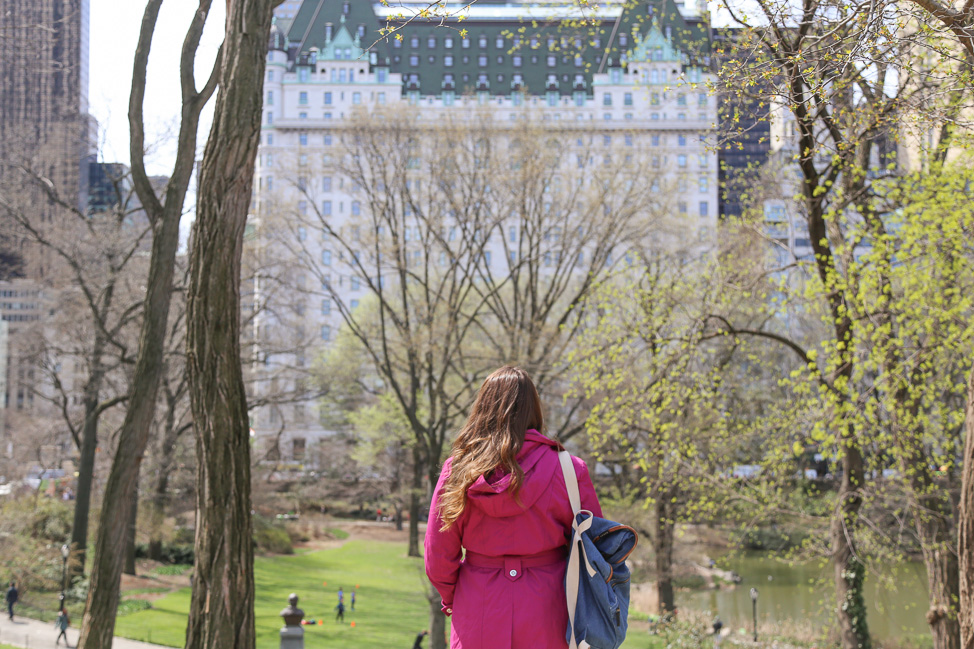 A Love Letter to New York City + the Plaza Hotel

You and I, we have a history. I was just 15 when we first met, a mere child in retrospect, and yet I knew I would one day call you my own. That day came when I was 22 years old. A job in Knoxville fell through, and I found myself unemployed, a newly minted graduate with a communications degree, which are a dime a dozen, and directionless. You seemed like a worthy, first post-college summer fling.

And what a summer we had! We burned the midnight oil in Greenwich Village, attended concerts on Randalls Island, napped off hangovers in Central Park, took weekend jaunts to Coney Island and soaked up every minute of our time together. And then summer was over, and we parted ways amicably, the mature way all short-lived flings should draw to a close. But that was hardly the end of you and me.

I came crawling back, as women are wont to do, a year later. This time, I did so with a signed letter of employment at Time Inc. and we had another 18 months together. And nearly a decade after leaving you for good, New York, you’re still my favorite friend with benefits.

This past month, we had such a tryst, but this time it was with my husband in tow—the one I left you for so long ago. He and I had a history with you, as well; after all, it was that same Easter weekend a decade prior that he asked me to move to California to live with him. I remember that dinner so clearly; we were at one of my favorite spots—Union Square Café, in case you were wondering—and I was equal parts scared, excited and gobsmacked. In the end, I went because I knew you and I were not meant to be long-term, that this was a relationship better left as good friends. And in all the times he and I have enjoyed your beauty together, we’ve done so from the comfort of friends’ couches. We’d never actually gotten to enjoy you to your fullest, and that’s by making our base in one of your iconic landmarks like the Plaza Hotel. Our ears popped as we ascended all those floors on that opulent elevator, and we stepped onto the floor to find it peacefully quiet, a novelty for a hotel situated right in the epicenter of all the action in Manhattan. We opened the door to our palatial suite to find that it just kept going and going—and going some more. It must have been double the square footage of my last humble abode in Hell’s Kitchen that I shared with two others. New York, had I lived in an apartment like this during my two years as a resident of yours, you and I might have lasted longer than we did (though, ultimately, I would have likely left you for the glitz and glamour of the Plaza). The Plaza, she is a seductress. She lures you in with her gilded touches and gorgeous natural light and entices you to stay for a while. Unfortunately, we only had but a night, so bathe in her glory we did; despite her prime location right on the southern rim of Central Park, we didn’t leave for 20 hours after we checked in. I’d been to the Plaza before, but this was my first time there as her guest, a brief but excited tenant doing my best to pretend that I, too, belonged there. I knew her glorious Plaza Food Hall on the level below the lobby was an epicure’s dream destination—in fact, I’d been there on multiple occasions to snack on macarons and gelato—and that her jazz in the Rose Club was a throwback to the times of F. Scott Fitzgerald and Zelda. Those two lovers—not unlike you and me, New York—even stayed here, too, perhaps even in the very suite that SVV and I inhabited. For those hoping to imitate our own fleeting fling with NYC—or even that of the revered writers—the Fitzgeralds have their own “Love Letter from The Plaza” package that includes a pair of plush robes, the Plaza’s signature champagne flutes, bath salts, a book of love letters between F. Scott and Zelda, a bottle of Ruinart Blanc de Blancs, a $100 food and beverage credit, and a dozen roses in room. “You are the finest, loveliest, tenderest, and most beautiful person I have ever known, and even that is an understatement,” said F. Scott to Zelda.

The same could be said for the Plaza. It’s easy to see why she’s become such a statement piece, such a style icon among the hundreds of other hotels that claim Manhattan zip codes. And I loved every minute of my peek into the bygone era of my first lover, New York, via the Plaza Hotel, the Roaring Twenties vibe its lounges like the Rose Club embody and the myriad architectural details dating back to the Age of Enlightenment. But all good affairs must come to an end, so after but a night, part ways we did, somewhat sorrowfully. Until next time, Plaza Hotel. And as for you, New York, you know I’ll be back for more … eventually. This trip was in partnership with Fairmont Hotels & Resorts on behalf of Travel Mindset. TwitterFacebookWhatsAppGoogle+BufferLinkedInPin It
Your Ultimate Guide to Planning a Weekend in Savannah, Georgia The Evolution of My Style: Trading Cocktail Dresses for Denim
SHARE
[shareaholic app=”share_buttons” id=”20872682″]
JUMP TO COMMENTS
YOU MIGHT ALSO ENJOY 24 Hours at JFK: Is TWA Hotel Worth a Layover? New York City Through the Lens