Something really cool happened while we were in Rwanda in March: The first five-star lodge in the whole country opened, and we got to be some of the first guests. This is monumental, as it’s a step in the right direction for building up Rwanda as a tourist destination once again, after the war in 1994 left everything in shambles. Considering the other places we had stayed—which were quite nice and clean enough, but nothing to write home about—I didn’t know what to expect. But let’s just say, Nyungwe Forest Lodge? Mind=Blown. 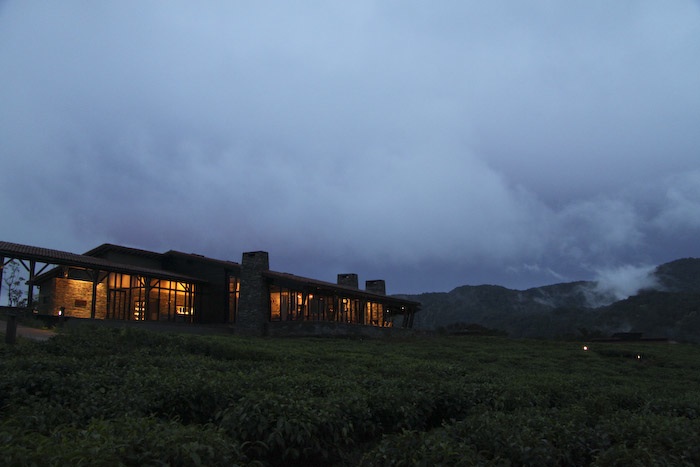 The interior was awesome. Every last clay tile on the roof was shaped over the leg of a local woman, making no two tiles the same. Chandeliers were made out of tea strainers. All accoutrements were procured from local villages. The rooms were top notch. No amenity was neglected. There were colobus monkeys chattering just off my balcony each morning. (That was a bit jarring at first, as I totally thought I had a peeping tom in the forest on my hands.) But what really impressed me most were the surroundings. Located on the edge of the national park of the same name, the lodge is nestled among a plantation and acre after acre of tea leaf bushes. Naturally, being the unsophisticated curious-minded travelers that we are, Ben, Dave and I decided to take a little stroll… …right into the bushes, that is. (Don’t be fooled. I was totally freaking out from all the critters I was brushing up against.) And, as if that weren’t enough—and as if we hadn’t already made friends with the neighboring tea pickers who were shooting us alarmed looks across the fields, mentally calculating whether it would cause more damage to sprint across the bushes and stop us or just let us be—we felt the need to start pickin’. From there, what else were we going to do but throw our collections up into the air in a tea frenzy? (You know you’d be tempted, too.) Then, we located a lone helipad amid the bushes. So obviously that meant one thing…jumping pictures! But in the remote regions of Rwanda, with no one else around to observe your tomfoolery, you can totally get away with these sorts of shenanigans. My kind of place, no doubt about it. *All photos taken with a Canon T1i, 17-85mm lens, housed in a LowePro SlingShot.

TwitterFacebookWhatsAppGoogle+BufferLinkedInPin It
Day Trip from Cape Town: Stellenbosch Wine Country An Afternoon on the Square in Lynchburg, Tennessee
SHARE
[shareaholic app=”share_buttons” id=”20872682″]
JUMP TO COMMENTS
YOU MIGHT ALSO ENJOY