In the beginning, our sole purpose for spending the first week of our honeymoon in Borneo was to check out this new resort, Bunga Raya, that had recently open and with which I was obsessed. (Or so I thought.) I had the intention to write about it for some of my outlets—I know, I know, it’s my honeymoon, I shouldn’t be working—and had come across this place when the seed of an idea to jet off to Borneo was first planted by my friend and could not get the thought of staying there out of my mind. 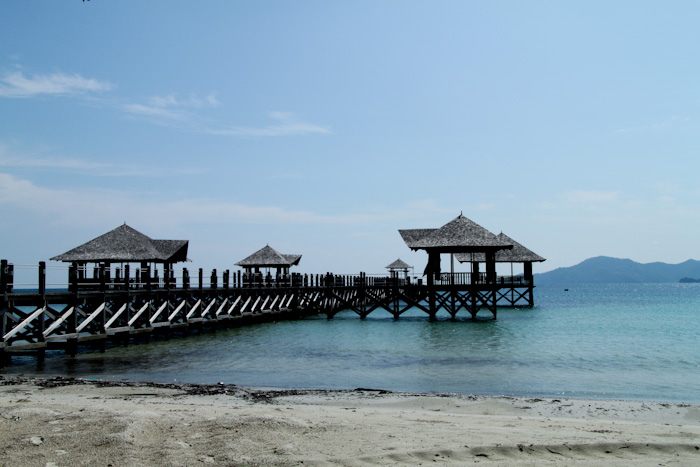 The thing is, on paper, everything looked really nice. The grounds were plush and verdant, decorated with every color of bunga raya—the national flower—under the sun. Rooms were brand new and outfitted with all modern gadgets and comforts—not like many of the other “rustic” (meaning basic) resorts we found in the area. The bungalows were perched high in the jungle, slightly apart from the other units, and had great views of the South China Sea. And yet there was something about the place that just wasn’t right. For one, we were the only ones there. Observe: Other than two other guests in the 47-bungalow resort, we were the only ones. (And they still stuck us in the basic villa. Most resorts will give you an upgrade if they have the room. A beachside perch and private plunge pool would have been nice!) That’s a bit odd for a place that’s just been open a year, isn’t it? Not only that, but it’s creepy to have an island to yourself more or less, yet have staff pop out of every bush and crevice to try and tend to your every need.

Two, the food was terrible. As in frozen and reheated. Which is fine and all if you’re not paying FIVE HUNDRED DOLLARS a night to stay on a secluded island. (Confession: We got a bit of a press rate for this one but were still forking over 300 bones a night.) Us being the only ones there got downright alarming. It felt as if something wasn’t right, like we were about to be the next to sacrificed up in some extreme Pagan ceremony. (Have you seen Wicker Man? That’s totally the feeling I got there.) Isn’t that why we’d come home late at night and find a hookah tent with billowing drapes set up in one of the dock pavilions? There is a sister resort, Gayana, located on the other side of the island. We took a day trip over there. Each of the two resorts offers routine free ferry services to the other. And other than the fact that the food was much better, all I have to say is: Damn. All Bunga Raya issues aside, I’m sure glad we didn’t opt to stay there! Though we did see a bearded pig, trailed by a handful of long-tailed monkeys, en route on the boat. That was freakin’ awesome. I won’t say all was lost. It wasn’t. We had a great time just being together and not interacting with others. We read a lot of books. We snorkeled off the coast. We watched movies and World Cup. We had the pool to ourselves. It was just far from what we were expecting, far less than what we paid for. But you know what? Sometimes that’s all part of the travel game. You learn as you go. What did we learn? Well, that property websites can be deceiving. Don’t be fooled by the lure of good photography. And always be sure to check out the Trip Advisor reviews before you go. TwitterFacebookWhatsAppGoogle+BufferLinkedInPin It
What’s in My Bag: Packing for Cool Climate Discovering a Medieval Castle in France
SHARE
[shareaholic app=”share_buttons” id=”20872682″]
JUMP TO COMMENTS
YOU MIGHT ALSO ENJOY