This Town Can: How the First Mural in Nolensville Came to Be

Written by Kristin
You are here: Home / Blog / Art / This Town Can: How the First Mural in Nolensville Came to Be
[shareaholic app=”share_buttons” id=”20872686″]

The story of how the first mural in Nolensville came to be is a long, drawn-out tale that I don’t particularly care to rehash in great detail, because the good news is a) it is done and b) nothing could have been a more fitting end to Walls for Women than Kim Radford’s “This Girl Can.” But to fully appreciate the full year’s worth of work it took for this mural to come to fruition, I’ll give you the briefest of overviews.

In October 2019, a friend of my cousin reached out to ask for help about bringing the first mural to Nolensville, the town where he and his wife and their two young kids live. This led to a phone call, which led to an in-person meeting in December (remember: these were “before times”), which led to Nolensville being one of the first cities to express interest in January when we put out the call for member cities of our innovative program celebrating the 19th Amendment centennial by hiring female artists to paint across Tennessee. For context, Nolensville is an amazing town of young families and transplants, many of whom wanted more space as the Nashville real estate boom happened within the last decade, pushing many long-time residents to the communities surrounding Davidson County in search of more land and a better quality of life. There’s a lot of new construction, and a whole lot of new residents. Pretty much the entire town is centered along Nolensville Road, which is a straight shot from Nashville about 20 minutes south. Ross and his colleague Debbie, two of the hardest-working citizens who will never take “no” for an answer, took the mantle on bringing Walls for Women to Nolensville. First, they lobbied the Board of Mayor and Alderman—for months and months, I tell you—with the support of then-Alderman, now-Mayor Derek Adams, and when the BOMA (i.e. the city council) declined participation on May 7 (video of that meeting here), they didn’t let that stop them. They thought outside the box and came up with another way to fund Nolensville’s first piece of public art. In late May, Debbie set out to fundraise on her own for the mural by launching a Kickstarter campaign. It was successful—so successful, in fact, that they surpassed the goal in just four days’ time, thanks to the backing of 93 individuals and local businesses, and wound up contributing the $3,200 excess funds to a local nonprofit, Round Up for Nolensville.

They had the funds, so surely, the mural was now a given, right? Wrong.

On June 25, Nolensville’s Historic Zoning Commission voted down the COA for the proposed mural site, the Painted Dragonfly, a lovely gift boutique right in the heart of the community. What’s a COA, you may wonder? Glad you asked. A COA is a “certificate of appropriateness,” which HZCs in many towns implement as a cursory review process for when a business owners decides to tackle exterior renovations such as masonry or adding an awning, windows, doors, paint, roofs, gutters, fences, yards, you get the gist—basically anything that can be seen by the street. The most successful Main Street communities we have met with across the country have a “mandatory review, voluntary compliance” policy when it comes to COAs, which is the smart way to go about it. The Nolensville HZC, however, grants itself full authoritarian powers.

The problem here? First of all, legally, you can’t make an arbitrary decision about art, which they did; “we’re not against murals, we just want to wait until something more appropriate comes along” was the abbreviated version of their decision, meaning their vote was not at all content neutral, which a court would have had a heyday with. Secondly, original art is covered under the First Amendment. If this sound familiar, it’s because it is an all-too-familiar tale: It’s exactly what the Manchester HZC attempted to do with the American flag mural.

Our favorite piece of literature, the U.S. Constitution, covers freedom of speech and artistic expression, and that’s something a volunteer committee of novices simply can’t trump. It’s sad that so many of these so-called preservationists don’t respect the Constitution more, but kudos to EJ Kerr, the sole HZC member who voted yes to send this through. The full video of that meeting is here, and it’s worth noting that several of the HZC commissioners stepped down after this because the public, the very constituents they are supposed to serve, was livid.

Technically, the building owner would have to be the one to legally challenge such an uninformed decision—or just say, go ahead and paint it as so many business owners often do—and would win that challenge easily, with it likely not even going to court, but we understand why the Painted Dragonfly owners didn’t want to go there with as small a town as Nolensville is.

Instead, Debbie and Ross moved on. There was not a challenge these two would not overcome.

Fourth wall is a charm?

In early July, Nolensville had the funding, the HZC was out to say no to the mural no matter where it went if “in the historic zone,” and the launch of Walls for Women was quickly approaching. With the bulk of businesses located along a single stretch on Nolensville Road, wall space in town is a premium.

One local leader had already bullied the original business owner from allowing the mural to go on his wall, then the Painted Dragonfly was strike two. Strike three came when, the night before installation was set to begin, we lost the ability to use a community building we were previously granted permission to paint. At this point, it was mid-August, and our DMA-events board was in East Tennessee overseeing the completion of the Knoxville and Maryville murals. The clock was ticking.

But again, Ross and Debbie did not let this deter them.

I heard from the Nolo team that they had done some recruitment and come up with an awesome coffee shop who was willing to let us paint their brick wall. Even cooler? It’s a WOMAN-owned small business, Mama’s Java. And kismet? The landlord of Mama’s Java happened to be a friend, Kunal Patel, I’ve known for several years. Things were looking up!

We masked up and met with Kunal over beers at his new business, Mill Creek Brewing Co.; he immediately understood our vision and wanted to be able to give this to Melissa at Mama’s Java as a way to bring more visibility to her coffee shop in a tough time for small businesses. He also is a champion of women and said he wanted to do this for his mom, sister and his darling new wife, Vruta. Thank you, Kunal, for being an ally to women everywhere! If you’re in Nolensville, definitely stop by Mill Creek and have a few rounds of beers. It’s one of my favorite breweries in all of Tennessee. By the time we finally had Mama’s Java locked in, our chosen Nolensville muralist Kim Radford was booked up for a month—and we felt awful having dragged her along through the murky waters of small-town politics. She’d never worked with us before, and I wanted to assure her that most mural projects do not have the hurdles that Nolensville’s did. But she was a true champ, revamped her design for the new space and, in late-September, got to work painting the brick wall SVV and I had primed white. photos of Kim taken by the amazing Ilde Cook, a Nashville-based photographer

It took her about five days total, and the result is a true work of art. “This Girl Can” is a companion piece to the beauty below that she painted in Huntsville over the summer and so perfectly summarizes everything it took for women to achieve the right to vote; for Nolensville to fight for its first mural. In the end, everything works out the way it’s supposed to, right? Kim’s “This Girl Can” has become a local icon, and rarely does a week pass where I don’t see a group of young girls, teens or adults stop in front of Mama Java’s to pose with the piece of art. Here are a few community posts—the state champion volleyball team from Nolensville High School, a Girl Scout troop, a group of young suffragists, the Schuyler sisters—that the owners gave me permission to share. 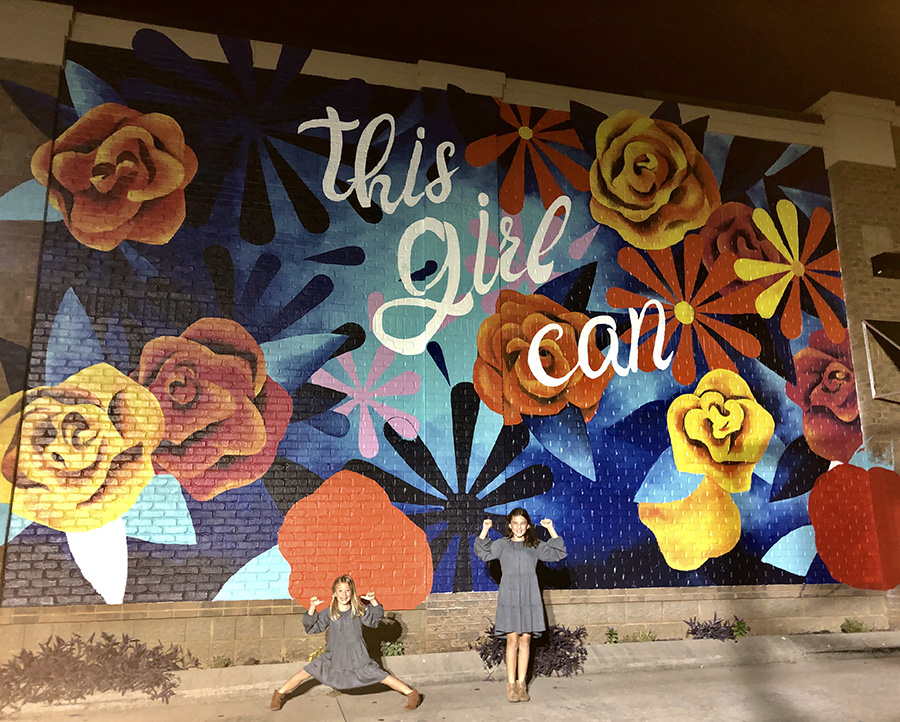 I’m from a conservative town full of folks scared of change  who don’t want to see the city progress but would rather watch it rot away in a time capsule, so I can sympathize with Nolensville’s plight more than anyone. But the takeaway? They persevered. This became so much more than just a mural, but a statement. In fact, in August, the very day Kim was originally supposed to begin painting, the citizens of the Town of Nolensville voted to change the city charter from a strong-mayor system to a group of commissioners with equal power. A month later, just days before the mural was completed, a group of commissioners were sworn in as the new Nolensville government. Was this because of a mural? No, obviously not. But did this piece of art become symbolic in Nolensville citizens fighting for a more equitable government structure? Without a doubt. It’s also extremely symbolic of the purpose of Walls for Women—honoring the fight for women’s suffrage through the creation of original art—especially when you consider the fight the suffragists went through for decades (and a fight women today are still having for a place at the table in so many fields, street art included). And despite the sleepless nights, the months of fighting local commissions, the hours on the phone talking our Nolo friends off the ledge, it was all so very, very worth it. Find the other Walls for Women murals here: 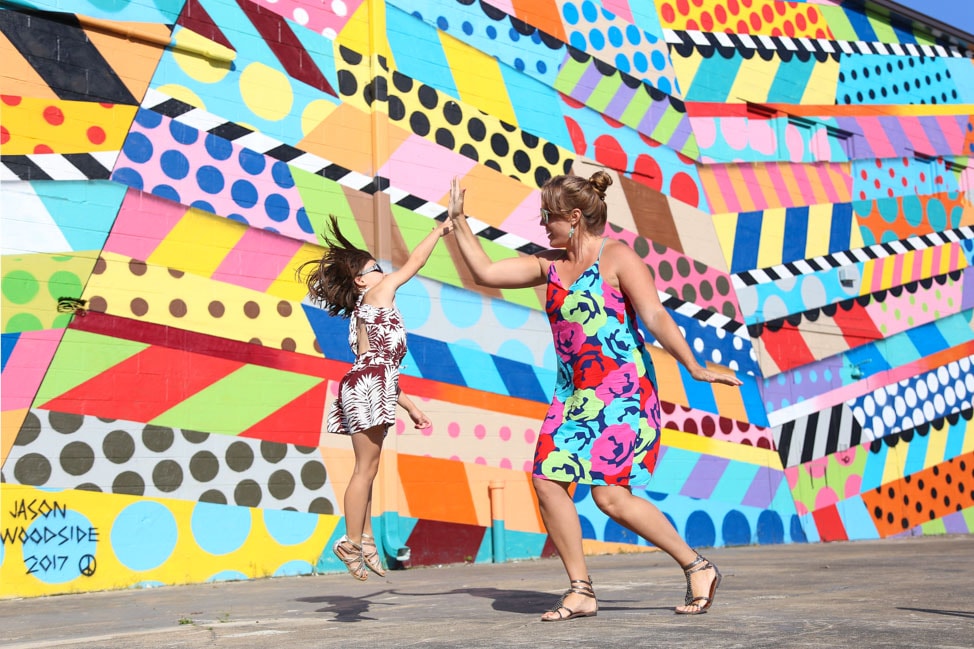 A Work of Street Art: The Best Murals in Nashville