You’ll never find me as one of those snobby frequent travelers who eschews typical “tourist experiences.” Oh no, I’m all about anything hyped—the kitschier, the better. After all, life’s no fun if you’re serious all the time. So when I found myself in Denver in February working on a travel guide for Sunset, I was all about hitting up the attractions I’d skipped over during my previous visits to the Mile High City. Because I was in town on assignment, the local tourism board gave me a pair of passes that would get me into most local tourist draws. My always-up-for-anything friend Samantha took a couple days off work to flit about the city with me, and I was happy to introduce her to a number of things she’d never done—despite having spent the past five years residing in the city. It should come as no surprise that our first stop was the Downtown Aquarium. Given my love for diving, I am always up for a virtual trip underwater. While it can’t compare to my two favorites, the Georgia Aquarium in Atlanta and the Tennessee Aquarium in Chattanooga, Denver’s version was still fun to peruse. It was more child-like with a lot of bright colors and cartoon-y fonts and had a number of massive rays and a flash flood canyon where you get to experience what it’s like to go through a number of weather systems. It also had…tigers. I’m still mulling that one over myself. Our next stop the following morning was the Denver Zoo. Unfortunately, the sign is all I saw of this attraction, as they denied our passes (despite it saying very clearly on them that we were to be admitted!). We saw no point arguing—I mean, a lion is a lion is a lion, right? after all, I’ve seen those bad boys in their natural habitats in South Africa—and so moved onto my favorite Denver attraction, which just happened to be around the corner.

The Denver Museum of Nature & Science was way cool. Even though science has always been my worst subject, I love me some science museums. Sam and I traveled through space, through prehistoric times and through a land of frightening reptiles—all in a matter of an hour! My favorite exhibit, by far, was the gem stone room. What girl doesn’t like sparkly baubles? Other places I want to put on the to-do list for my next visit are the Coors Light brewery in Golden and the Celestial Seasons factory tour up in Boulder (both free attractions). Alas, 72 hours is hardly enough time to cram in all Colorado has to offer! Maybe next time I’ll turn to Directline Holidays to plan it all for me!

On our way to check into Hotel Monaco for our slumber party, we stopped by the Four Seasons for a cocktail at EDGE. Given how crowded it was for a Wednesday night, I’d say this is a pretty popular spot for after-work drinks. Of course, every Denver day should conclude with a trip to a local bingo hall. (What, you didn’t know that was the thing to do? Yeah, me neither.) Sam, her boyfriend Josh, her sister Dani and Dani’s husband Thomas all let me in on their favorite pastime. I may not have beaten the lady next two us, with her own dobber carry case, an oxygen tank and eight cards at once—I had enough trouble keeping up with one—but I sure had fun. One thing’s for certain: Sam doesn’t let me leave town without adding something new to my horizon. Last year, I broke a bull; this time, I broke in my very first bingo dobber.

Before my flight on my final day in Denver, we made it over to the Brown Palace Hotel for afternoon tea. I’m a fan of tea—as evidenced by my attempt to drink my way around the globe—and Brown Palace’s is one of the most famous in the United States.

It was totally worth the calories and all the trips I had to make to the lavatory on the plane! 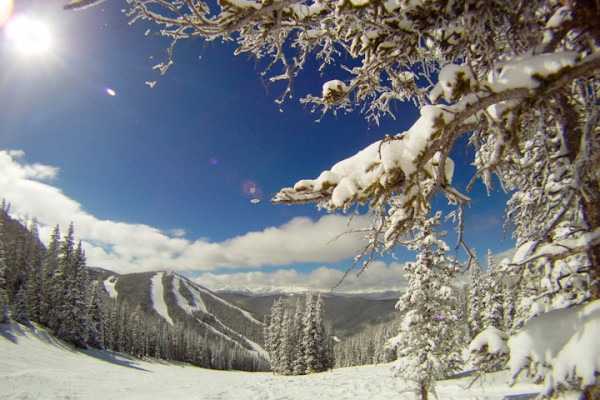 City Dog Goes to the Rockies: A Pet-Friendly Colorado Vacation