The great thing about having an influx of visitors is that I get to play tourist as a tour guide. I pretend it’s all for them, but really it’s for my continuing Southern education as much as anything! As previously mentioned, while I grew up in Tennessee and spent my first 22 years here, there are plenty of major attractions I’ve yet to tackle. Until recently, Cheekwood Botanical Garden was one of them.

My NYC roomie Katy came down to explore the South for a long weekend in August, so we did what all first-timers to Tennessee do: We went shopping for cat kitsch in Chattanooga’s North Shore; we presented awards at the Walking Horse National Celebration; we had Moon Pie sundaes at Bell Buckle Cafe; and we paid a visit to Cheekwood. (What, that’s not what your Tennessee trip looked like? Well, clearly, you need to travel with me next time.) This isn’t just a typical botanical garden, though; it holds a century’s worth of history—and a little ol’ coffee empire, too.

One of the city’s greatest entrepreneurial legends, Christopher Cheek, got his start in the grocery trade alongside his son, Leslie. A decade later, Leslie Cheek got hitched to Mabel Wood and soon became president of the family business. While Christopher and Leslie were busy building up their brand, cousin Joel Cheek was hard at work perfecting a coffee blend that he sold through a local institution, the Maxwell House hotel; Leslie and Mabel were investors in his venture. Maxwell House coffee fared OK, I’d say: What is now General Foods went on to buy the parent company, Cheek-Neal Coffee, granting the Cheeks a sizable income (of $40 million…and this was back in the 20’s, too). With their future secure, the Cheeks were able to relax a bit, so they bought a 100-acre plot of land upon which they built their manor. Leslie died shortly after the estate was completed in 1933, and their youngest child Huldah and her husband moved into the place a decade later. 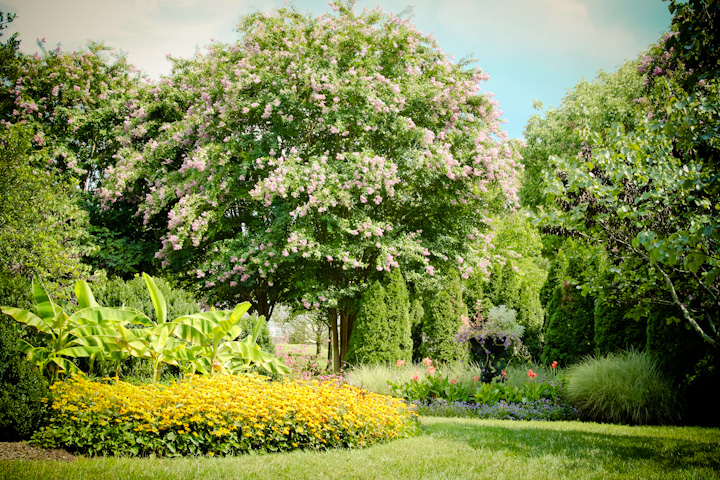 In 1959, the Nashville Museum of Art’s permanent collections came to live at Cheekwood, which since 1960 has served as the city’s own botanical gardens. You can explore 55 acres of manicured lawns, filled with grottos, pools, streams, statues, crepe myrtles, perennials, dogwoods, oaks, hickories, persimmons, pines, and many other plant, tree and flower varieties. There’s also the Carell Woodland Sculpture Trail that stretches nearly a mile and is filled with wildlife and carved curiosities. Inside the museum, you’ll find permanent exhibits of Worcester porcelain and American silver, American paintings and sculptures the centuries, and a collection of contemporary paintings from the likes of Andy Warhol, Sophie Ryder, Robert Ryman and Larry Rivers.

I’ll be honest: A big reason I wanted to at the tail end of summer was for the annual treehouse exhibit. (In fall, there are trains and pumpkins and all sort of autumnal treasures.) And I’m nothing if not a huge kid at heart. Our favorite treehouse was the giant fish. Katy climbed up inside it and emerged with a couple of eight-year-old sidekicks. The fish’s facade was made of used CDs. I’m pretty sure I saw my old Ace of Base and Mariah Carey albums posing as scales. There was another “house” that resembled a giant ball of yarn. I climbed inside it and tried to get these kids to smile for a picture with me. They ignored me. I felt so old and lame. Rejected by a 10 year old! I guess I’m not as naturally charming as Katy. Admission to Cheekwood is $12 for adults, $10 for seniors, and $5 for students and children. The current exhibit (through Oct. 31) is scarecrows, and the train exhibition runs through the end of the year. You better believe I’ll be taking my locomotive-loving husband to the garden for that!

Visitor’s Tip: Cheekwood is located deep in Belle Meade, the city’s swankiest zip code. Even if you’re not a huge fan of flora, it’s worth driving out to the gardens to see the mansions that surround it.

TwitterFacebookWhatsAppGoogle+BufferLinkedInPin It
Rainbows Over the Scottish Highlands A Game Weekend in Knoxville, Tennessee
SHARE
[shareaholic app=”share_buttons” id=”20872682″]
JUMP TO COMMENTS
YOU MIGHT ALSO ENJOY