Basic Budapest: Know Before You Go

When we decided to take our 2016 Luna family vacation on an AmaWaterways river ship, we were more than a little excited that the week-long itinerary started in Budapest. SVV and I spent our first Christmas together in 2005 traipsing through Hungary and Transylvania, and this would be our first time back in the region—and during summer months, rather than the harsh chill of winter, at that. Since there were eight of us traveling, I never even considered a hotel; we knew we’d be booking an Airbnb so we could all stay together, and I was pleased to find a number of affordable four-bedroom options. Which begs the question….

The Hungarian capital has only been one unit since 1873, and the famed Chain Bridge—built in 1849—connects the two banks. We stayed on the more hotel-populated Pest side of the river in a very old sun-filled apartment with lots of period details and plenty of charm.

Originally, we were set up in a place beside the waterfront along Párisi Udvar, but the accommodation company moved us to an apartment on Király Utca instead due to the first being under construction. I think either area is a great one to stay in: The first is more ideal for those looking to do tourist attractions along the river, while the latter offers a more East Village-type of stay, which this former New Yorker really dug. Buda is the hilly side of the Danube whose most popular residents are the castle, Matthias Church and Citadella fortress. It offers the best sweeping views of the entire city, but is better for, say, a day visit—save it for a sunny afternoon—than to use as a base for your entire trip. The Pest side is the more commercial district, peppered with shopping centers, boutiques, government buildings, restaurants and ruins bars galore. Personally, for the sake of covering a lot of ground and taking minimal public transit, I’d recommend staying on the Pest (east) side of the Danube in District V, VI, VII or VIII to be within easy walking distance to Budapest’s vibrant food and nightlife scene. 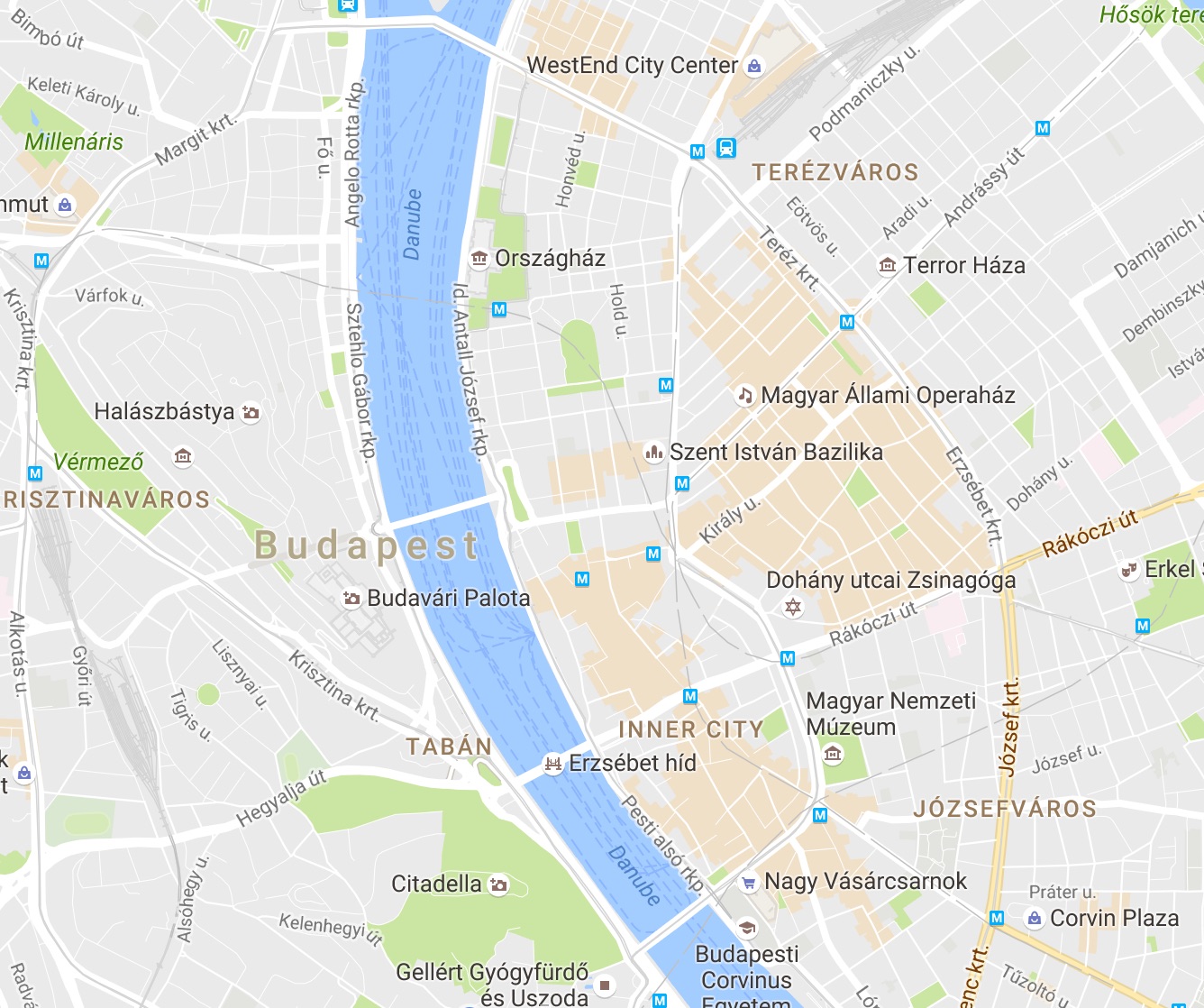 Budapest is a very safe-feeling city, one I’d feel comfortable exploring solo, but one that’s also perfect for families or couples. Some distinctly Budapest things to check off your list:

For $15, you can soak in the city’s many public thermal baths (or spas), many of which have been around for centuries. The Széchenyi Thermal Bath is one of the most well-known of all, while Király Bath is the oldest (Rudas and Gellért Bath also date back to the 16th century). Pastry and bread fumes waft through the streets of Budapest, and you’ll find yourself wanting to try a little of everything. The good news is that they’re so cheap (30 cents or less) that you totally can sample a bit of everything. After all, cake (and dessert as a whole) is a way of life in Hungary, so why not embrace it and do as the locals do? I think this is what they call having your cake and eating it, too. 😉 You can’t say you’ve done Budapest without visiting one of its famed ruins bars in the Jewish Quarter, but let’s just say I’ve never felt so like I was back in college again. We did one loop inside Szimpla Kert, and then immediately went back out again. So crowded, so rowdy, so not us. Still, cool to have seen nonetheless. You can ride the funicular up to the top of the Castle District or you can walk the 20 minutes or so of stairs, as we did, to reach this World Heritage site, which is now also a museum. Up the road from the castle a mile or so, this behemoth Roman Catholic Church is triple the age of my entire country, one of the oldest buildings in Budapest, and the site of many a historic coronation. Just in front of the church, Fisherman’s Bastion (Halaszbastya) is the best spot for panoramic viewings. You can choose to pay to go up top or you can steal away beneath the arches and have nearly as good a view as free. We didn’t go inside this striking structure and were told that was a big mistake (huge). Still, whether you tour it or not, you simply must stop by the Gothic-Revival icon by day and by night. The riverfront along the Pest side is dotted with river boats and bars to sit down and have a drink as you admire the Danube, Europe’s second longest river, in all her glory. Possibly the biggest selling point of Budapest isn’t just the culture or the architecture, however; it’s the price. That’s to say, it feels like Western Europe—but without the hefty price tag.

Have I convinced you yet that you need to make a trip to Budapest happen? TwitterFacebookWhatsAppGoogle+BufferLinkedInPin It
Everything You Need to Visit Zion National Park Fireworks Over Budapest: Joining St. Stephen’s Day in Hungary
SHARE
[shareaholic app=”share_buttons” id=”20872682″]
JUMP TO COMMENTS
YOU MIGHT ALSO ENJOY