After South Africa, we had five days of smooth sailing across the Indian Ocean with a day in Mauritius as the next destination. In past voyages, Semester at Sea had spent as many as four days on the island, but due to a myriad of reasons, we now only dock there for 12 hours. Let me tell you, there’s little more painful than being presented a platter of cupcakes only to have it snatched away from you before you’ve gotten more than a single bite (metaphorically speaking of course). Such was the case of our fleeting afternoon diving Mauritius. Mauritius holidays are popular among European vacationers, but I know very few Americans, aside from Semester at Sea alums, who have been to the little Indian Ocean oasis. I wish we could have stayed longer—two weeks would have been ideal!—but we made the most of our brief time there nevertheless and organized a dive outing. SVV had located an operator in the nearby town of Flic en Flac who offered to pick us up at the ship, drive us the hour to the town, take us out on the boat for a two-tank dive (including all equipment) and drop us off at the ship at the end of the day—all for the steal of $104 a person (which is peanuts compared to most diving costs…seriously, y’all, it’s an expensive sport, the main reason we don’t dive as much as we would like). My fellow staffers (and good pals) Josh and Brian decided to come along, too, as did seven members of the SAS dive club. I didn’t know a single one of them before we all set up to brave the underwater world together, and let’s just say, I continue to be impressed with how awesome the Semester at Sea students are and would like to think I returned to the ship at the end of the day with seven new friends; we had a fantastic time bobbing atop the tepid ocean together. The weather was perfect, although our boat driver complained about the “chilly” temps as it’s the beginning of winter on the island. If 85 degrees and a hot, sweating sun constitutes winter, I’ll take it! The water, on the other hand, wasn’t quite bathwater once we reached a depth of more than 20 feet—much to the dismay of a few of the guys in our group who opted not to wear a wetsuit and, consequently, were shivering (but still smiling) for hours afterward. As usual, SVV toted the GoPro along for the ride and snapped away at our underwater follies. The visibility wasn’t great—in fact, at times, it was downright awful, to the point that our group got separated at the end of the dive and later during the second. On the first dive, our advanced group did a wall dive to 115 feet. While several dolphins and even a few bull sharks live in Tamarin Bay, we didn’t see anything big, mainly a lot of macro life and cool corals and a bevy of lionfish as big as soccer balls. We took a nice lengthy surface interval, hanging out on the boat and working on our tans before submerging for a second dive.

Only this time, I didn’t make it down. As I started to descend, a piercing pain shot through my ear canal. I went up and then back down, slowly, three times, but the pain wouldn’t go away. This was the first time I’ve ever experienced any sort of pain while diving, but if there’s anything you learn quickly as a diver, it’s not to tempt ear pain. So instead of continuing on with the group, I surfaced, called it a day and spent the next hour working on turning a rich shade of chocolate. We got back to the MV Explorer just half an hour prior to on-ship time and had to wait in an enormous line before swiping in just three minutes before 6pm. If you’re late, even by a minute, no matter if you’re student, staff or faculty, you get time deducted from your next port in two-hour increments. Meanwhile, everyone already on board congregates on decks five through seven, heckling and watching as the time ticks down to see who was naughty. Luckily, none of us had to suffer such a fate as a sacrifice for our fun spent underwater! We even had a spare moment to watch the sun set over Port Louis from the top deck before we set sail. And while we only had a brief time to enjoy Mauritius, I’d like to think we took advantage of every last second—both soaking up the island culture and enjoying an afternoon with a collection of new friends. 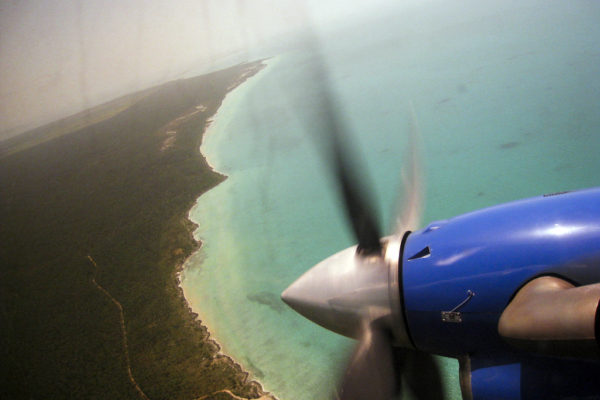