Written by Kristin
You are here: Home / Blog / Scotland / The Quest for the Highland Cattle in Scotland
[shareaholic app=”share_buttons” id=”20872686″]

If the postcards are to be believed, Highland cattle in Scotland are everywhere. Well, that’s not quite true. In fact, in all the times I have visited—and through the months that I lived in Edinburgh—I only ever saw one Heilan’ coo from a distance. This trip, I was going to change that. We had been in the country for five days with nary a coo sighting. I made the mistake of telling my sister all about the furry beasts prior to our trip, and spotting one became her sole focus throughout our road trip around Scotland. It’s safe to say we had Coo Fever. Even though we hadn’t seen them on the mainland, we figured they would be everywhere on Skye. Yet, after arriving on the island, we spent the day driving around Broadford and Portree and the coast just beyond … and still no coos. Resigned to the fact that this trip wasn’t going to hand us any coos, we headed to our bed and breakfast. As we bumped along the one-lane country road, I saw a scattering of tan heads just over the hill. Could it be? It was them. All this time, we went out of our way trying to track down coos, and there were a whole herd of them just outside our B&B window! And they were every bit as cute as we expected. But I also won’t say they weren’t. Scotland must have thought, no, no, it is not, because that is exactly what happened, no lie. (And no, we didn’t have beef a single meal while in Scotland. I mean, just look at them—could you?) 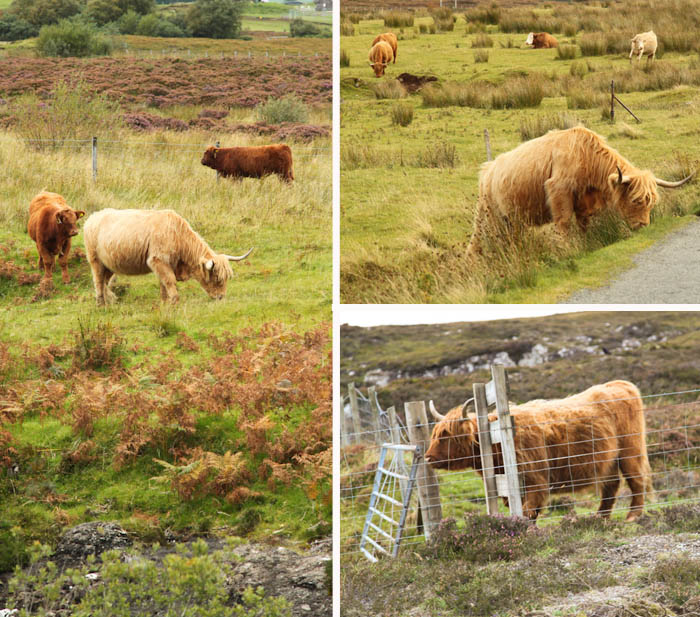 TwitterFacebookWhatsAppGoogle+BufferLinkedInPin It
City Dog Finds a Home in the Country Life Update: On Buying a House & Starting a Biz
SHARE
[shareaholic app=”share_buttons” id=”20872682″]
JUMP TO COMMENTS
YOU MIGHT ALSO ENJOY