The Spirit of Savannah: Best Beer and Cocktail Spots

It’s entirely fitting that the one place that started out as an alcohol-free zone, inside the last colonial state founded by the king of England on the continent of North America, would turn into a destination that not only embraces liquor, but allows visitors to wander the streets with a mug of it in hand. The best bars in Savannah are many, and you won’t have trouble filling your cup, no matter what part of town you find yourself in. The best bars in Savannah

Us Southerners want you to have a good time, y’all, and if that means trusting you with an icy beverage while strolling amongst the mossy oaks, then well, so be it! And there are many things to do in Savannah, sure, but at the top of the list should be getting your cocktail on—bars seem to be positioned on every corner and back alley. The vibe of Savannah is syrupy smart, with a slow drawl and quick wit awaiting around every corner of local’s mouths. The warmth and genuine care about people are what draw us back to this gateway to Southern culture and hospitality time and time again, and the restaurant and bar scene, which have positively exploded in the past decade, are what consistently keeps it at the top of our travel list, no matter how many times we visit. On the past two trips to coastal Georgia, we kept copious notes on everything we drank, and while this is no means a comprehensive list—and by the time you read this, no doubt, five new bars have cropped up. In the meantime, here are a few of our favorite local watering holes, the ones we’ve dubbed the best bars in Savannah, though no doubt we’ll continue “researching” for years (decades) to come.

With a fancy dress code and sublimely elevated interior, Artillery brings the A-game to Savannah’s cocktail scene. The speakeasy vibe with modern accoutrements was a welcome addition when the owners opened the joint in a former artillery storehouse back in 2016, and luxury doesn’t quite describe the ambiance of the establishment. Unique drinks mixed up by professional bartenders in bow ties are guaranteed to spark conversations, as are the bronze, marble and subtle homages to the historical uses of the building spread throughout. While Artillery Bar boasts a central location in the Historic District, and thus is the perfect stop for your first drink of the day when it opens at 4pm, note that tennis shoes and sloppy clothing have no place at the table in this posh lounge.

What you’re having: The Doc is SVV’s favorite, with the sweet smell of torched pipe tobacco infused into a sniffer of rye whiskey and aromatics as part of the mix, while I’m partial to the Chatham Artillery Punch, Savannah’s signature cocktail, mainly because it’s served in a gilded pineapple. The Bit of a Pickle is also a lovely concoction of gin, balsamic, pepper and dill, making it dangerously crushable.

Best for: when you’re feeling a bit fancy

Spread out on the roof of the lovely Local 11ten restaurant, Perch is an off-the-radar type spot to snatch a couple of cocktails under the stars. With low-slung lounge chairs, bamboo planters and an occasional live music set as a backdrop to Bull Street, this bar is the perfect place to have an actual conversation with friends you’d like to impress (or get to know better). What you’re having: The Nutty Negroni, a gin forward cocktail washed with Campari and a walnut liqueur, is divine. The Boxcar is also a favorite, with brandy, cognac, Grand Marnier and a frothy egg white topping.

Best for: an intimate date night or friends in need of a quiet atmosphere

Set among vaulted brick walls and with a decidedly speakeasy feel, Alley Cat Lounge lays claim to an extensive selection of all genre of alcohols—so large, in fact, that they issue a newspaper that reads like a tome as the menu, broken down by vodka, gin, bourbon, whiskey, etc., with house-made cocktails apportioned off within each section, making a handy reference for your mood. The imaginative mixologist behind the variations on intoxicating beverages is a genius, and you’ll not be lacking with options. Table service was spotty when we were there on a Saturday, so I’d say Alley Cat is best enjoyed on a weeknight. What you’re having: The bar’s rum inventory is outstanding, so dabble in the tiki selections, which often come in a fun container like a coconut shell or statue.

Best for: a nightcap

Trade Room at the Alida

The Alida is Savannah’s swankiest new hotel, set in the industrial corner of the Historic District right near the riverfront, so new in fact that it had opened just two weeks prior to our visit—and even its rooftop had yet to debut to the public. Designed by the same company who did Nashville’s Noelle, it has many of the same features, such as the Trade Room, which focuses on classic cocktails. Tucked into the corner of the pool deck, the Trade Room features mid-century fixtures and an inviting, yet sophisticated feel, with hints of the 1920s scattered throughout. Grab a pre-dinner drink in this chic lobby bar, then venture downstairs for dinner at the Rhett. What you’re having: it seems wrong to order anything but an Old Fashioned in this classy lounge

Best for: a first date

Five years ago, Savannah didn’t have much of a brewery scene to boot, but my how the times have changed. Veteran-owned with a warehouse industrial vibe and outdoor seating areas, Service Brewing seemed to explode right out the gate when it opened in 2014; it’s already on tap everywhere around town, and it makes some mighty fine beer, too. With year-round staples like the Compass Rose or the Battlewagon, this brewery—which is pet-friendly and donates a portion of their proceeds to military and first responder charities—trends toward the IPA fan club but pushes out seasonal offerings like Märzen, Witbier and stouts in addition to experimenting with many, many other iterations of fermented goodness throughout the year. There’s also live music on weekends. It’s only open Wednesday through Friday late afternoons and evenings, as well as most of the day on Saturday, so check the hours before you go.

What you’re having: a full flight of seasonal selections

Best for: the first drink of the afternoon

As recently as last year, Georgia had some mighty prohibitive beer laws with regards to distribution that stopped many a beer lover from pursuing his (or her) passion. That all changed not much more than a year ago, paving the way for people like James and Liz Massey to share their homebrewing with the masses. Though the interior of this brewery is on the smaller side, the design is on point with striking paintings on the wall and even a mural on the outside; Liz, it bears noting, is a graduate of SCAD, a prestigious design school. But what we loved the most of all was its serious dedication to sours—there were so many on the draft list that SVV and I couldn’t even try them all in a single flight! With a four-barrel system, Two Tides is constantly releasing small batches of new and interesting brews. So bring your dog—or your kid … there were several of both!—grab some friends and head to this second-story brewery in the thriving Starland District

What you’re having: a flight of sours, served on a terra cotta clay pot

Best for: a lazy Saturday with friends

Sporting sweeping views of the historic city and bridge over the Savannah River, the Peregrin is a rooftop bar lounge with fun nooks and long bar tops with stools (and even a mural wall, which you know I loved!). Perched atop the trendy Perry Lane Hotel, Peregrin is open daily starting at 11am and going strong through midnight (and 1am on weekends). 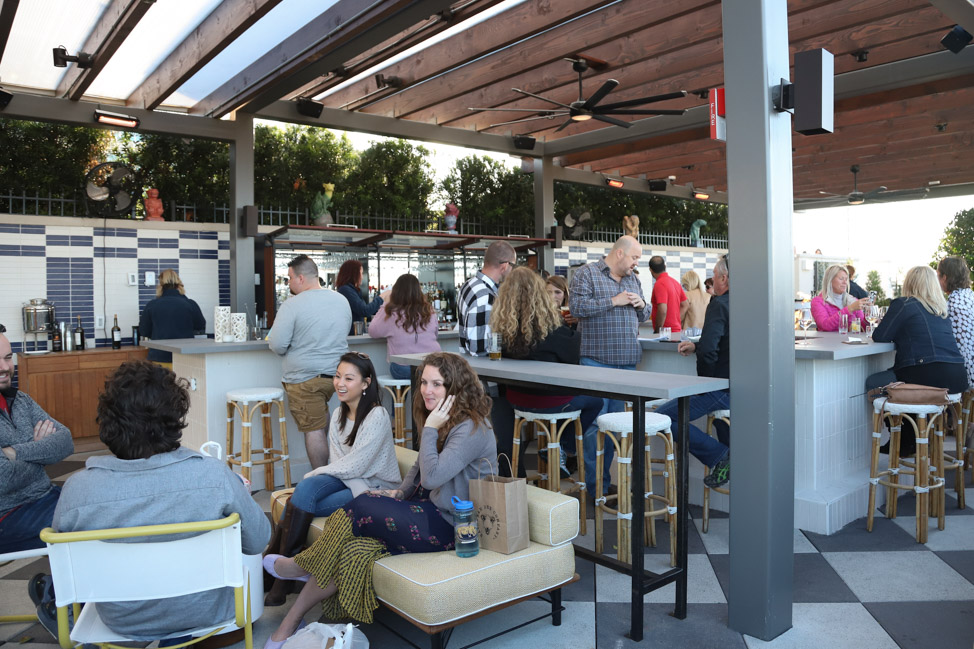 In truth, we went and checked out the view, but there was nowhere to sit, so we moved onto Proof & Provisions across the street instead, though everyone there seemed to be having a blast and I’ll plan on getting there earlier (and on a weekday, not a Saturday) next time I touch down in Savannah.

What you’re having: a glass of bubbly or the rye-forward Southern Gentleman

Best for: the views

Two interconnecting levels on the ground floor of the Desoto Hotel make up this whiskey and bourbon forward bar, with Madison Square just outside the doors. Classic cocktails, a brown liquor list that spans the entire United States and a generous food menu with delights like Edgar’s Nachos—smothered in braised short ribs, because hello, we’re in the South—is a one-stop shop if you’re hungry and thirsty for elevated food and drink. What you’re having: The Sazerac

This dock bar on Isle of Hope is a summer staple for Savannah residents, and I’m so glad our friend Susan took us there for a Sunday afternoon beverage our visit before last. The drive out is lovely, with Savannah’s iconic oaks and weeping Spanish moss draping across the roads, and I loved the Wyld’s casual, laid-back vibe, the lawn games and the dock that allowed you to people-watch as boats cruised by. Note: The Wyld is typically closed for maintenance a couple of months in winter, so check the site for updates before you head out there.

What you’re having: a liter of the house Sangria

Best for: a summer Sunday with no plans on the horizon

Prior to Savannah’s recent beer boom, Crystal Beer Parlor was the place to go for a brew. And it still is, particularly if you want to try more of Georgia’s beers, as well as other regional favorites from throughout the South, beyond just Service and Two Tides. After all, Crystal Beer Parlor has been beloved by locals since it opened in 1933, and its central locale means it’s packed any day of the week. Added bonus? There are 80 beers to choose from, with more than two dozen on tap, so grab a stool at the bar, order some pub grub and settle in for an afternoon of sippin’.

What you’re having: a selection of Georgia beers—don’t be shy!

Best for: the thirsty hops lover

Once I saw a birthday cake martini on Instagram, I knew that Jen’s & Friends would be on my itinerary for the Savannah bachelorette weekend I planned for a friend.. If you don’t like sweet drinks, this might not be your place, but they have 300+ kinds of martinis—from traditional to specialties like Reese’s Pieces and S’mores—and every one I tried was delicious. It’s tiny, though, so get there early if you want a table or space at the bar.

Because sometimes you just want a cheesy night out like a true tourist would experience Savannah! A Savannah staple, this piano bar is loud and raucous, but also a must-do at some point during your stay. Who doesn’t love a good piano duel, and all the music was great, the drinks were affordable and there was plenty of space to sit in the roomy establishment.

We still have a good amount of drinking our way through the Hosteess City of the South, including visiting these bars in Savannah: For more Savannah travel tips, check out these posts: TwitterFacebookWhatsAppGoogle+BufferLinkedInPin It
Looking for a Winter Trip to Canada? Here are 5 Wonderland Getaways Off the Rails: Where to Go Along OKC’s Streetcar Line
SHARE
[shareaholic app=”share_buttons” id=”20872682″]
JUMP TO COMMENTS
YOU MIGHT ALSO ENJOY Meet Our Favorite U.S. City—Here’s Why You Should Visit Savannah Right Now