A Grandmother is an Angel in Training

Written by Kristin
You are here: Home / Blog / All in the Family / A Grandmother is an Angel in Training
[shareaholic app=”share_buttons” id=”20872686″]
It’s never easy to lose someone you love. If they go from an ongoing illness, you always think it’s going to be less painful, because you knew this day was coming for years. But nothing can prepare you for that day when you finally have to say good-bye to that someone for good…or, depending on your religious beliefs, at least for now. 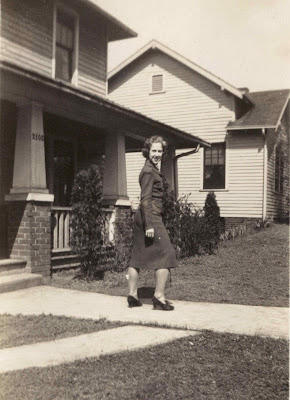 My grandmother, Doris Jeans Watts Housholder (now that’s a mouthful, isn’t it?) was born on Dec. 15, 1921 in Knoxville, Tennessee. She was the middle child of three, with an older brother, Tom, who had a tendency to “accidentally” dip her pigtails in inkwells, and a younger brother, Jimmy, who she always felt the need to look after. 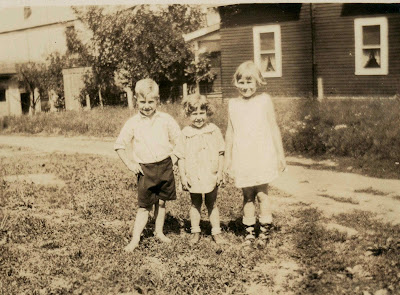 When she was but a child, a mere teenager, she met my granddad. He was one of seven children, living with only their mother, as their father passed away years before. My grandfather was–and still is–an extremely brilliant man. He graduated high school at just 15 years old, and while he won’t admit it, he could have gone to any Ive League college he wanted (his brother Charlie, who’s 91 and lives in Memphis, went to Harvard Med). But he stayed in Knoxville, because he’d met the love of his live, my grandmother. She went out on a date with him, as a favor to his older brother Quinton, and the rest is history. 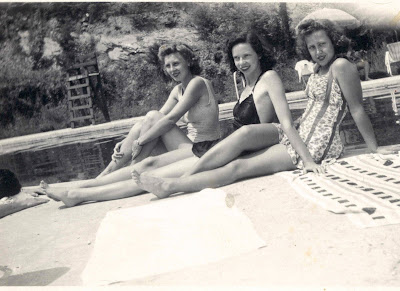 They got married, and my grandfather left for war for four years. He was in the Battle of the Bulge, one of the bloodiest battles in WWII. It was weeks before my grandmother found out he had lived to tell about it. 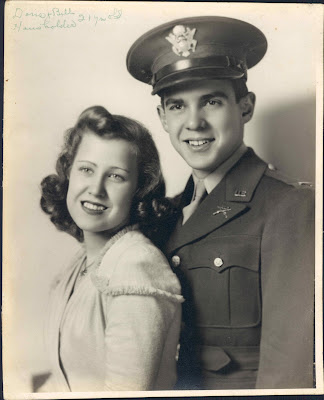 It’s been something like 70 years since my grandparents met–can you imagine being with the same person every day for nearly three quarters of a century? It’s simply unheard of in today’s society–and I don’t recall ever being around the pair of them without seeing some form of PDA, whether it was a peck on the cheek or a full-blown hand-hold (ew!). It was sickeningly adorable. Even at 86, when her brain was gone and she barely knew her own name, one thing remained unchanging: her blissful love for my granddad. I’ve never seen two people so in love, and after seven-plus decades at that. 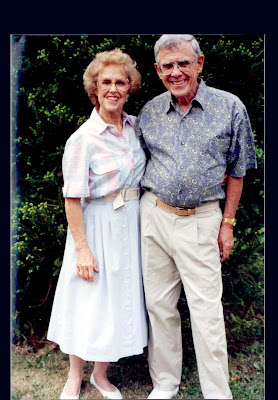 They had two kids, my mom and her older brother Bernie, and moved to the house in Tullahoma in 1955, in which they still resided until early 2006 when they moved in with my parents. 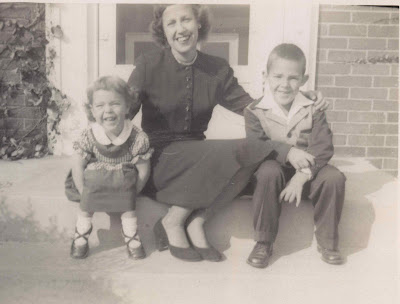 I was born the fourth of five grandkids, but I was the luckiest of the bunch: I grew up just five minutes down the road from my grandparents and spent much of my early years drinking “pudge juice” (the Kool-Aid my granddad named after me, despite that I was anything but chubby) and playing in my grandmother’s garden. From the time I could utter coherent sounds, I called her Dede–no one knows why, other than to suspect I was trying to pronounce Doris. Even as I got older, I continued to spend every Saturday night with Dede and Granddaddy, and I speak the truth when I say you couldn’t ask for two cooler grandparents. 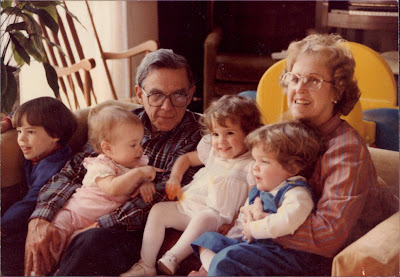 Even though sometimes I was convinced her many granddogs were even more spoiled than the rest of us! (She always had five or six at any given time.) 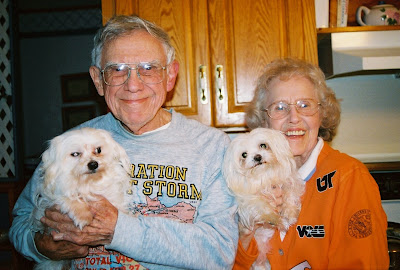 I think I get a lot of my wanderlust from the two of them. True, they weren’t the most intrepid of jetsetters–they were more cruisers and organized group travelers–but once my granddad retired and my dad took over the CPA firm, they were always hopping a plane to Egypt, Israel, Russia, Greece, and I quickly garnered quite the armoire of (dusty) international souvenirs. 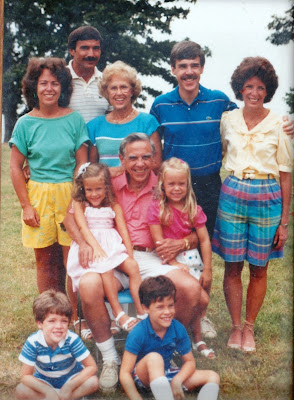 Dede always had a propensity to pinch her grandkids’ “tushes” when we walked past. Cousin Rebecca and I learned this at a young age and were pros at flexing our bum muscles just as she would make a reach for them. This always resulted in a “rock hard!” response from her. She never caught on–or if she did, she never let us know. This trait must run in the family, because my Uncle Tom, her brother, still does it, too. 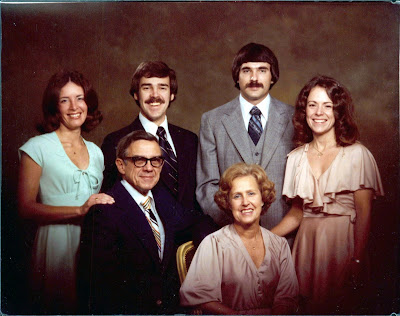 Much like my friend May’s grandmother, who passed away just a couple months before mine, Dede called everyone “shug,” short for “sugar.” I’ll never be able to hear anyone say that without thinking of her. She was incredibly talented with a needle and thread and smocked many of the dresses my sister and I grew up in (and we wonder why I still refuse to wear jeans). There wasn’t anything she couldn’t fix or alter, there was nothing she wouldn’t at least attempt to remedy. 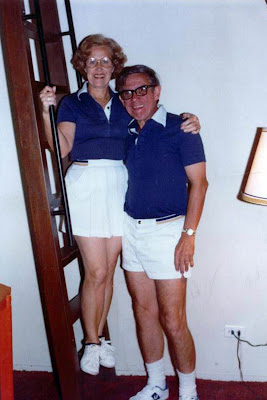 Dede was always so eager to marry me off—as many grandparents are—perhaps because growing up, I was more concerned with school and sports than dating. One time, in recent years, while I was home visiting, she handed me a Tullahoma News clipping.

“What’s this?” I inquired curiously.

“It’s a singles night at one of the local churches; I thought you could attend!” she exclaimed.

“But Dede, I have a boyfriend,” I told her. We had just gone over this.

“You do?” she paused, mystified, despite the fact that we had just gone over this. “Well, it doesn’t hurt to keep your options open!” she winked at me. She was constantly surprising us and a comedian in her own way. So far, two grandkids have been checked off the list, three more—myself included!—to go. 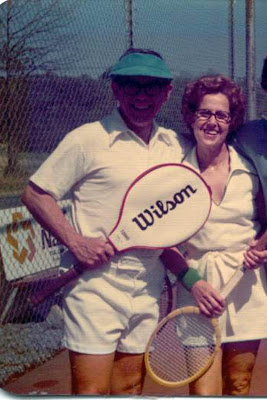 I’ve always been an enthusiastic shopper (this you know)—despite that my hobby doesn’t exactly mesh with my writer’s salary—and my mom always swore I got my love for clothes from my grandmother. Even after she moved in with my parents a couple years back, she would never emerge from her bedroom in the morning until she was fully outfitted in a cute ensemble, had her accessories on to match, and made sure her face—her makeup—was on. Another thing along these lines I took from her was an obsession with pink. I don’t think my grandmother owned an outfit that didn’t at least have a hint of her favorite color. 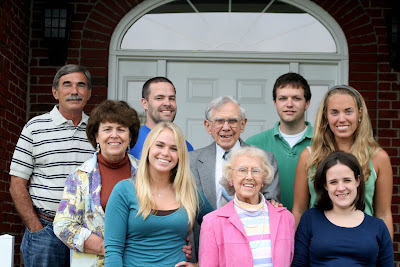 Sometime around 2001, after I had gone off to college, Dede started acting funny. They sent her to various neurologists and couldn’t figure out what was up, but she wasn’t acting herself. After awhile it was finally discovered that she had advanced dementia. Still, she was smart–even if she had no clue who any of us were, as happened toward the end, she would give you a huge heart-melting smile and a wink and act like she did, that you were the most important person in the world. 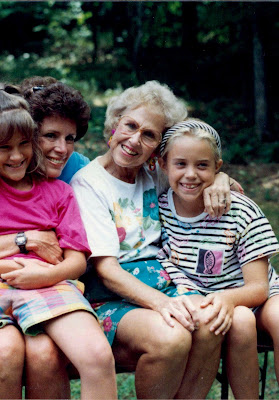 One of my favorite recent stories was from Andrew and Kelly’s wedding last December, which happened to take place on Dede’s birthday. At the reception, they brought her a big birthday cake, and she exclaimed, dumbfounded, “Well, it was just so nice of all these people to come out for my 90th birthday (it was her 86th)! I don’t even know most of them!” 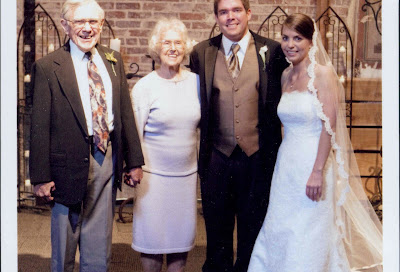 She honestly thought the party was completely organized in honor of her. 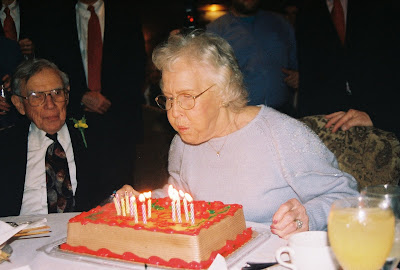 While we were in Alaska, she suffered the last of many strokes that tore up her poor little body in recent years and left her unable to eat or walk. My poor granddad, her biggest fan, had to make the devastating decision to let the sickness run its course, as there was absolutely nothing that could be done to help her condition. She died on July 17, 2008, peacefully, at my parents’ home. I think it was God’s way of ending her misery once and for all; she’d been through enough already. That mentality still didn’t make it any easier to let her go. 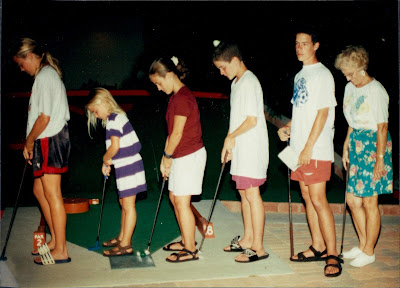 More than 300 people filled the church, despite that her funeral was held on a Tuesday morning during the summer, while many of our family friends were away on vacation. Many of the attendees sported blue- and white-haired do’s and were accompanied by a cane or walker; it was rather endearing. Some even outaged my grandparents by a decade. All had tears streaming down their cheeks, for they were her friends far before I was on this planet. But my sister at the sage age of 19 hit the nail on the head: “At least she’s somewhere where her mind is completely back now. And it’s only selfish of us to want her to stick around in pain just so we feel better.” She’s right, and we all know this and have reached the point where we can tell her story with joy, not out of sadness.

My favorite part of her obituary was this: “She was a friend to everyone, and a mentor to many–the first to arrive with food for the sick, and the last to leave when someone was in need of a comforting hand.” As my mom said in her letter to her mother at the funeral, Dede went as far to take coloring books to the neighborhood children when their beloved dog passed away. 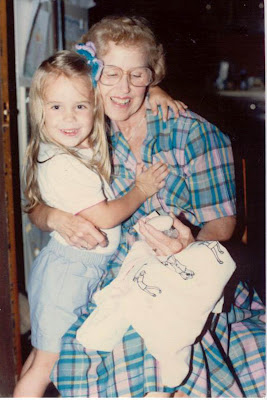 Until I was 7 years old, I honestly thought she was my best friend (that’s what I would tell anyone who asked). I never thought it odd that I would much prefer having a 60-something best buddy to a child my own age. 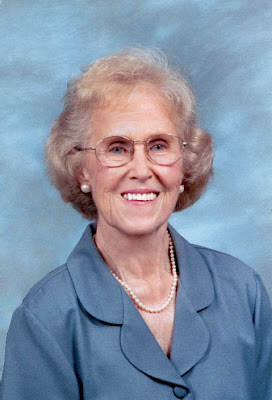 She was the Dede who would climb Rutledge Falls with us well into her 70s; the Dede who would let us, her grandchildren, consume an entire bag of chocolate chip cookies and gallon of ice cream—much to our mothers’ chagrin–if we so much as asked; the Dede who so generously took us on family vacations to Florida or the Bahamas. The Dede who would rather undergo a double root canal than miss a Sunday of church. And while toward the end, she barely knew us, that’s still the Dede we’ll all remember.

TwitterFacebookWhatsAppGoogle+BufferLinkedInPin It
26.2: Running My First Marathon Under the Sea: Overcoming My Fear of Sharks through Diving
SHARE
[shareaholic app=”share_buttons” id=”20872682″]
JUMP TO COMMENTS
YOU MIGHT ALSO ENJOY