I’ve never been as nervous in my life as I was last weekend–not any of the several times I had to take the stage in front of thousands of people, not even when I was meeting up with SVV in Hawaii after not seeing each other for seven months, not knowing what the future would hold, or if there even was a future. On Saturday, my stomach was in knots, so much so that I had to make a visit to the little girls’ room every 10 minutes or so. On Sunday morning while I was waiting for the elevator, I had to run back into our hotel room and vomit up my dinner from the night before (too much information?). Point is, I was a little on the edgy side. 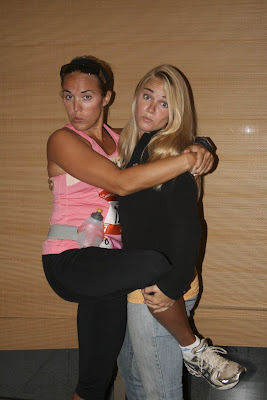 The day before my first marathon, my mom, sister Kari and I went into the city early day and checked into the Mandarin Oriental. While I only live 15 minutes from downtown on a traffic-less day, I’d learned after the Nashville half marathon, not to risk trying to get into tthe heart of the city when tens of thousands of others are trying to do the same. Not to mention, the race started at the ungodly hour of 5:30am–why? WHY, I ask you? SF is coolest in the summer; it could have begun at 7am and wouldn’t have made a bit of difference–and I wanted every last second of sleep possible. While checking in, the woman at the reception desk gave me a funny look and told me she’d be right back. Great, they lost our reservation, I thought, this is just perfect. Au contraire! She returned to tell us that we’d been upgraded to THE Thai Pan suite, which had a kitchen, parlor, living room, bedroom, giant bathroom and 50-foot balcony overlooking the Financial District and the Bay. Could I have better timing (for once)? 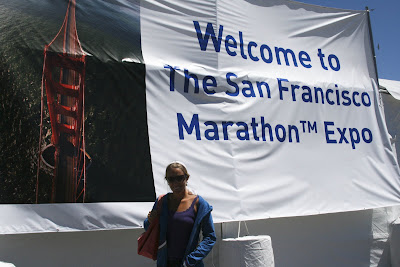 I was stoked and immediately laid out my race day outfit to make sure I hadn’t forgotten anything. Attire and running shoes, check. Gu and sports beans, check, check. Ear buds and iPod, got it. Body Glide. UH-OH. Possibly the single most important thing for a runner logging more than 10 miles or so is the lifesaving Body Glide, which I rub on my legs, on the underside of my arms, around my sports bra line and all over my feet to prevent chafing and blisters (it works so well I have yet to get one blister in all the miles I’ve logged this year). It comes in a deodorant-like stick and is just five bucks or so, so I figured I could run out and get some. 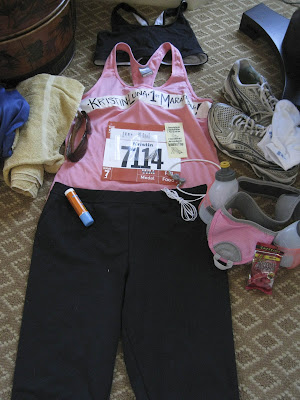 Niketown and North Face didn’t carry it. They told me I’d have to go to a running specialty store. Well, there are none in downtown SF, not to mention it was very close to 6. I ran to GNC, got there at 5:55pm, and they’d already locked their doors and wouldn’t let me in. I started crying. Yes, I am that lame. I get very stressed out if things aren’t perfect. I mean, I have to wear my hair the same way every time I run, in a braid; I can’t eat anything other than Cheerio’s or a granola bar or I’ll be sick; I must have some kind of sugar rush after 9 miles or so; I just don’t do well with anything upsetting my routine. Not to mention, the one time I neglected to glide myself, I ended up with such bad chafing I was walking like I’d undergone childbirth for an entire week. It wasn’t pleasant. 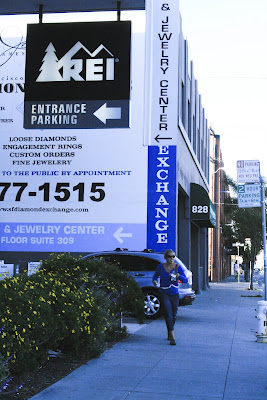 When I phoned him in a panic, SVV, Boyfriend of the Year that he is, calmly offered to take the train into the city and deliver the goods to me that night, but I thought that a little bit silly. So per the suggestion of the lovely North Face employees, I turned to a last resort and called REI, and lo and behold! They had Glide! And didn’t close until 7! It was now 6:35, and we didn’t have in-and-out privileges with our parking garage, so my mom, a saint in Chico’s clothing, hailed us a cab, and he drove us down to REI, waited as I ran in and got the paraphernalia, and drove us back to Belden Place, where we dined on Italian and consumed pasta and TWO desserts to carbo-load for the following morning. (Which turned out not to matter, as my nerves caused me to relinquish my dinner anyway.) 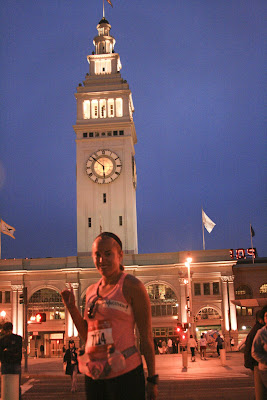 I took an hour-long bath in the suite’s Jacuzzi and went to bed at 9:30. Which didn’t matter much, as I never really did sleep, and when I finally dozed off I woke up in such a pool of sweat that I had to remove my pjs and take off the sheets. When the wake-up call came at 4:30am, I wasn’t happy. I’m not a morning person in the slightest–that’s actually my least favorite part of running, the getting up before the sun. The first wave of the SF Marathon starts at 5:30am; my corral time was at 6. But whatevs, at least this way I sleep through the first few miles of the race or so. And it took me until the first quarter mile to realize I’d completely neglected to put on deodorant that morning. Party foul. 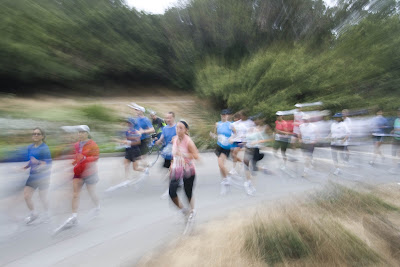 The run over the Golden Gate Bridge was slightly overcast but not foggy and relatively windless for San Fran, so Weather Gods, I praise you for this. It was strange, as they only roped off two lanes of traffic, so we were running alongside the cars. I didn’t need my sunglasses in the nearly five hours it took to run the race, though ironically I carried them the entire way, dropped them in the last quarter mile and they shattered on the course. Good going, Kristin.

I’m not going to lie, I was quite disappointed in the turn-out of race goers. Granted, it was at a very early hour, but the race was still going on well after 10am. The NYC Marathon is the event of the year in Manhattan, and even Nashville had over 100,000 in crowd support. There were a couple viewer-heavy areas along the route, but more or less it was a straggler here and there and small sporadic groups of people wearing odd costumes, likely still drunk from the night before (only in San Francisco, kids). The best part, however, was the fact that the Hell’s Angels came out in full support and spread their leather-and-chain-clad selves throughout the 26.2 miles.,acting as course monitors. They were the best cheerleaders a girl could ask for, and if I ever were to run into them at a biker bar, I’d shower them all with a million passionate kisses. 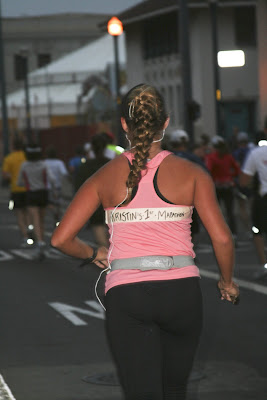 One thing I would tell any future marathoners that helped me was plastering the front and back of your bib with “First Timer” on it. I did just that and had so many fellow racers cheering me on throughout the day that it was encouraging. So many of them quipped, “You’re running SF for your first, gurrrl, are you cuh-razy? This is one of the hardest out there!” I was beginning to get that very feeling.

From about mile five on, it was all uphill (no, really). I definitely went at it harder than I should have, but my friends Autumn and Eileen were running the second half marathon and I had to time it perfectly if I wanted to cross paths with them. 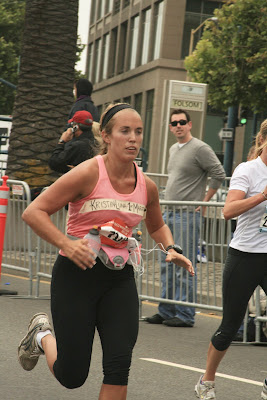 By the time I found them on mile 15, I was huffing and puffing and extremely light-headed. While Eileen raced ahead–she was going for time–Autumn ran alongside me the entire way, even though she was chipper and fresh and spry and could have finished in about half the time. Although I wanted little more than to die on the last 10–yes, TEN–miles, Autumn coached me through it (and regaled me with tales of drunken mishaps and dates gone wrong) and even prompted me to sprint the last half mile, in which I smoked a couple dozen people, holla.

I’ve had several people e-mail me after the fact asking me my time. But does it really matter? I FINISHED! That’s all I need. (Though realistically, I am extremely competitive–even with myself–and I said I’d be happy with anything under five hours, though I was secretly shooting for 4:30. I made it in 4:42. C’est la vie.) 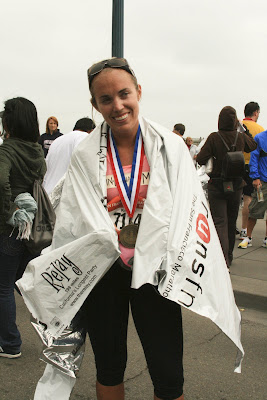 While I’ve never been so exhausted in my entire life, it was comforting to have my peeps waiting for me at the finish line. My fam and SVV: 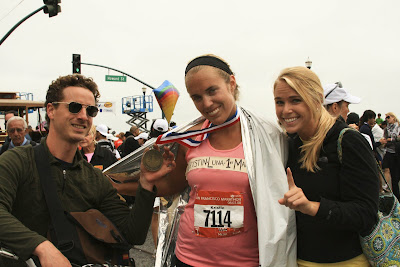 Who really must love me if he let me hug him in all my stinky glory. 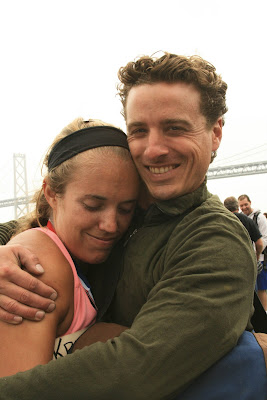 And Autumn, too, who was the one person responsible for getting me over the finish line. Gotta love good friends like that. 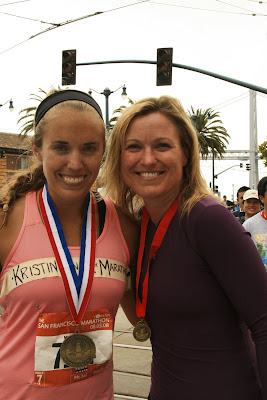 After it was over, I skipped the BBQ and huge soiree and ran, erm I mean WALKED, back to the Mandarin to soak in the tub before we had to check out. As I hobbled out of the Jacuzzi and over to the shower to rinse off, it occurred to me that my braided hair WOULD NOT BUDGE. I called for my mom–what, am I 12?–and she came running and tried to detangle the mess, to no avail. I had to wrap myself in a robe and sit in the middle of the floor as Mom and Kari each worked on a side of my head (um, I have A LOT of hair). Again, no success, and once reception called up to tell us it was time to leave, I had to douse my hair in conditioner, tie it in a ponytail holder and wait until we got home to remedy the situation. A couple hours later, my hair was tangle fre
e with scissors and a large clump of knots sitting at my feet. Next time, perhaps I’ll consider an alternative mean to keeping my hair out of my face. 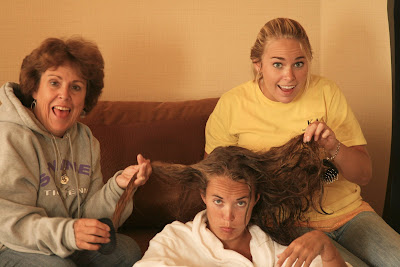 Although the full-body pain is just now starting to subside and my entire house reeks like an IcyHot factory, I’m already contemplating where I’ll run my next marathon…running, it’s like a drug. I’m thinking…somewhere cool…lacking humidity…nice and flat…maybe Iowa?

TwitterFacebookWhatsAppGoogle+BufferLinkedInPin It
We Didn’t Start the Fire: Visiting Yosemite A Grandmother is an Angel in Training
SHARE
[shareaholic app=”share_buttons” id=”20872682″]
JUMP TO COMMENTS
YOU MIGHT ALSO ENJOY

You Know You’re a San Franciscan When…

You and I Will Meet Again: Remembering My Dad